So here is the latest Den Protector / Deathmist Raptor deck for you to look at:

Anafenza, Kin-Tree Spirit is a shockingly powerful creature when combined with Collected Company (you may have seen the synergies in Modern, which are admittedly stronger than the Standard ones). Anafenza, Kin-Tree Spirit gives you a second aggressive two-drop to play (alongside Fleecemane Lion), which will usually be attacking for three despite being base 2/2.

The shell is a bit different from other Collected Company decks; the mana is more like an Abzan Megamorph deck. Sadly being non-Abzan we miss the most powerful creature in their strategy ( Siege Rhino) but make up for it a little bit with Whisperwood Elemental (which is actually synergistic with our Deathmist Raptor theme).

Most of the cards in this deck see lots of play, but not necessarily in the same deck all together. They have some sweet synergies that you don't see every day.

For example, Courser of Kruphix can get clean looks at the top of your library with both Mastery of the Unseen and Collected Company.

Mastery of the Unseen and Whisperwood Elemental manifest face-down creatures, which are not tokens; Manifested creatures therefore trigger Anafenza, Kin-Tree Spirit's bolster ability. Moving Deathmist Raptors between zones (including looping two against one another) makes for some mad Anafenza, Kin-Tree Spirit action! You can block, trade, grow forces, etc. without ever drawing a card. Luckily, you also get to draw a card each turn!

It can be tough to block Den Protector! I've had interesting games where Den Protector flipped face up to get Dromoka's Command, triggering multiple Deathmist Raptors (along with its own megamorph +1/+1) which alongside Anafenza, Kin-Tree Spirit and some precise decisions, make for an unblockable offensive threat. When in doubt, see if you can find a way for Den Protector to get through big.

Do I think this is the GW Aggro deck? I don't know. I do know Anafenza, Kin-Tree Spirit is one of the best cards to play with Collected Company and it hasn't seen much action in Standard. It is however A GW Aggro deck with some meritorious things going on, that can give us some thought-provoking opportunities to Make the Play.

Our hand was okay if not super swift to start, with a couple of three-drops.

The opponent opened on Temple of Deceit. On the second turn he played Thoughtseize, taking Courser of Kruphix. And then he played Polluted Delta, searched up Swamp, and immediately took our Den Protector, too.

We passed the turn with lands in play.

The opponent laid his third land: a second Temple of Deceit.

Which brings us to this: 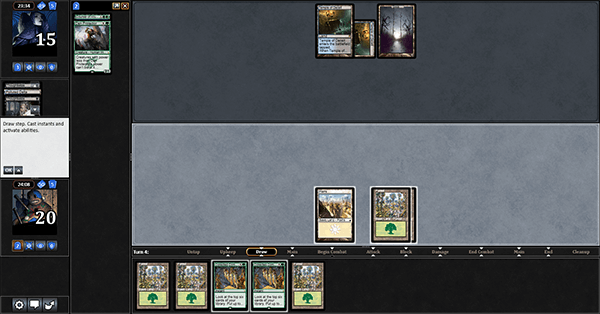 The opponent's board is two copies of Temple of Deceit (but one is tapped) alongside a Swamp.

He is down to 15 due to the Polluted Delta break and two copies of Thoughtseize in his graveyard.

On our fourth draw step we have three untapped basic lands and three Forests in hand alongside two copies of Collected Company.

We never landed the Courser of Kruphix and have no idea what might be on top of our library. We also have no certainty of what the opponent is playing. I mean we can make a reasonable guess, but this is game one of scenario one. On the other hand, the opponent knows some but not all of our hand; our last two pulls being the second Collected Company and the third Forest.

Scenario One Asks: How do you play turn four?

So far this has been a game of two decks doing what they are supposed to do.

It started with a near-Make the Play Monday moment on turn two. Facing a Temple of Malice only we thought long and hard about which two-drop to play. What deck plays Temple of Malice anyway? Is there a reason to get Mastery of the Unseen down now, before he nabs it with Thoughtseize?

The opponent answered with Roast.

We followed up with Brimaz, King of Oreskos, which bit a second Roast.

So then we went with a face-down Den Protector (like you do) and a Blossoming Sands.

He one-upped us nicely with a Flamewake Phoenix and a Wild Slash for our Den Protector.

But we had more gas!

Over the next couple of turns we dropped it all...

Now we're untapped with five mana in play and a Mastery of the Unseen that has yet to do any of its soul-crushing Magic.

We've had some good tempo, bringing the opponent to 11 life as we draw for turn seven a Deathmist Raptor. 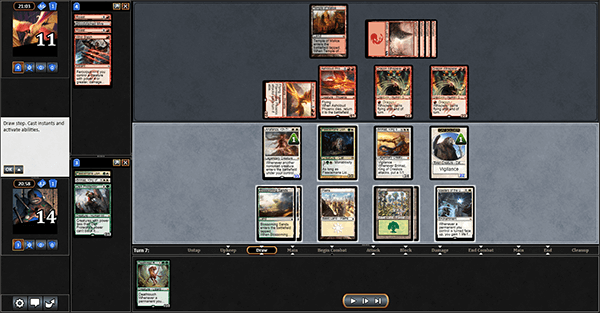 As I wrote above, we've both kind of played our cards. He's launched some good removal at our good creatures; but we've been able to hold creature position and have a lot of flexibility currently. Life totals aren't too far off, with his Flamewake Phoenix doing most of the damage so far (and a super lazy Ashcloud Phoenix). We've been attacking conservatively so far but might be sensing the opportunity to crack the game open.

Scenario Two Asks: How do you play turn seven? Notably the attack (if any)?

We split the first two games.

Game one was same-old, same-old for Brimaz, King of Oreskos, showing the rest of the white token whippersnappers who is tops in the token game. Monastery Mentor never did nothin'.

Game two was probably winnable. He led on Jeskai Ascendency. Rather than using our Dromoka's Command one-for-one we just answered with Courser of Kruphix...revealing [another] Dromoka's Command.

He had a not-super-productive Raise the Alarm and we had a decision to make. It could have been basic Forest but we went Blossoming Sands instead. When he passed we tried for Dromoka's Command, but he had Negate. Had we played Forest we could have played a second Dromoka's Command but instead he kept his Jeskai Ascendency...and you know how those things go.

So we have game three!

We have somehow survived into the deep mid-game having never drawn a Dromoka's Command.

That Jeskai Ascendency? It has been there since turn three!

Both of our graveyards are stocked, due to a combination of his Jeskai Ascendency (none of Anger of the Gods, Ojutai's Exemplars, or Dragonlord Ojutai ever actually saw the battlefield) and his End Hostilities.

We probably played into the End Hostilities, but how can you resist the combination of Anafenza, Kin-Tree Spirit and Collected Company? Especially with all those Deathmist Raptors?

End Hostilities or no, the post-Wrath world has been good to Heroes, with Courser of Kruphix and Fleecemane Lion follow ups, and of course a couple of turns working Elspeth, Sun's Champion.

The opponent stayed alive last turn with a big Secure the Wastes off his Outpost Siege.

This turn Outpost Siege has revealed a Negate which is great information! If you're unlucky enough to be playing behind an Outpost Siege, knowing where the Negate is (and might expire) is about as good as it gets.

The opponent is definitely up against the wall here.

He's only at one life but like Reid Duke says, the most likely times for us to make an error are when we are way ahead or way behind.

He is sending three Secure the Waste tokens at our Elspeth, Sun's Champion.

We have mad defense, luckily.

Our face-down creature is Den Protector (OF COURSE) and we have three untapped tokens to block with, if we want to. 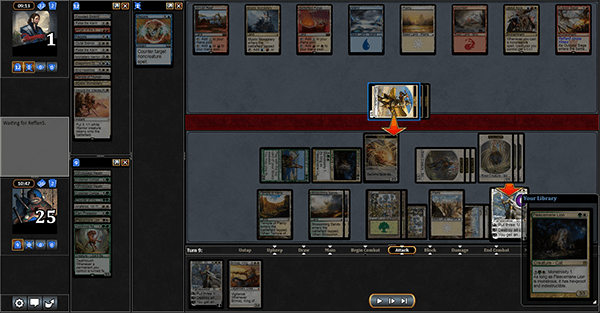 It's the opponent's ninth turn.

Scenario Three asks: How do you play the rest of his turn? Block (if at all)?

In case it matters to you, Fleecemane Lion is the top card of our library.

Ready to Make the Play?

Here's what you do: Put your answers to the above three scenarios in the comments below.

Here's what I'll do: Come back on Friday with a Celebrity Guest to revisit these scenarios, ultimately trying to find the best tactical play(s) and overall improve all our play!