This is a world now ruled by Ugin, the Spirit Dragon.

As Patrick Chapin recently suggested, Tasigur, the Golden Fang might be the best card in Fate Reforged (or, at the very least, it's won in Sultai Control, and made maindeck in Abzan Aggro, Abzan Midrange, and Sultai Ramp so far).

Monastery Mentor and Soulfire Grand Master have joined forces with Seeker of the Way and Goblin Rabblemaster to redefine -- nay, regular-old define -- the RW Tokens team of the present and foreseeable future.

These are all things that have already happened.

But for now, for this week anyway, your returning Make the Play Monday will focus, instead of the Monster of the Week, on some general rules and principles of clean Magic: The Gathering play.

The following two instances are both based on true stories.

Names, details, et cetera have been revised to protect the innocent. AND. THE. GUILTY.PART ONE: THE WARM-UP

Imagine if you will a kind of Cube format where you find yourself in this wonky situation: 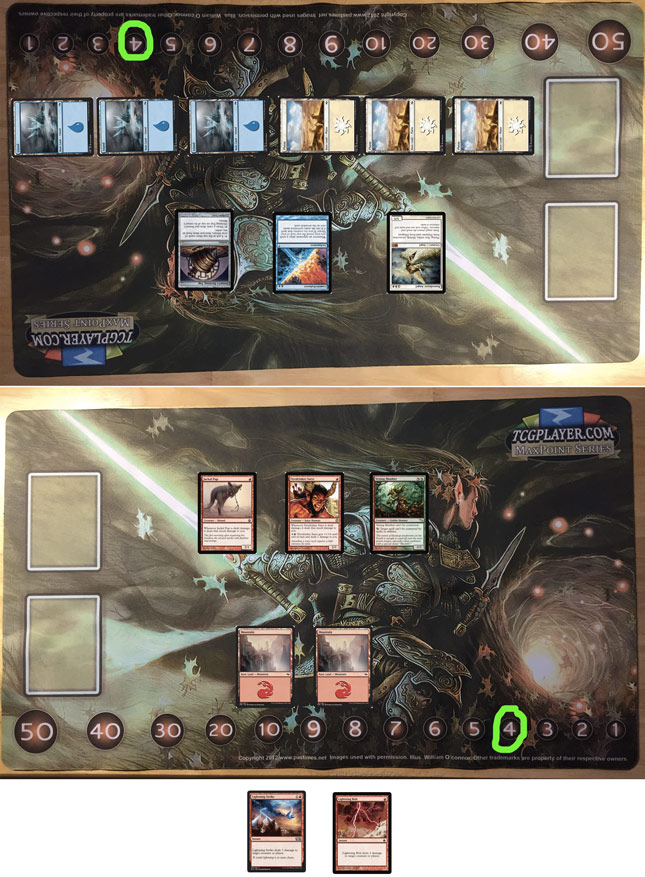 It is your first main phase (so you've drawn already).

There are cards in graveyards; presumably both graveyards.

I won't speculate as to what they are at the moment, as they don't really matter for purposes of solving the position at hand.

You, dear friend, are at four life.

Coincidentally the opponent also has only four life. Between your three creatures you have more-than-four power, but there is the matter of that aforementioned Baneslayer Angel.

The forces of YOU:

In addition to your three two power creatures to attack with, you have two burn cards in hand: a Lightning Bolt and a Lightning Strike. You can cast one given your two mana but maybe not both.

Sadly (for the opponent), the fellow across the table has zero cards in hand! And is tapped out!

It's now or never, friend. Kill him before he kills you.

Play this, likely your final turn.PART TWO: THE LINE IN THE SAND

This is also some Cube format.

I suppose the cards in both the above situation and this one are all reasonable for some format or other, but I don't really buy anyone playing Lightning Strike in any serious formats where Lightning Bolt is legal, and Firedrinker Satyr has a hard enough time getting off the bench without thinking about including big brother Jackal Pup in the conversation.

We are going for general rules of play here, and I hope you like how things turn out come Flores Rewards Friday (you know, four days from now).

In this one you are a reasonable RW deck. You are in game three against a sweet Monored Cube deck...the kind that "the people" are "always" complaining about in Cube. He has an insane curve (that he is already starting to show you in this game), good burn cards, and at least a Ball Lightning and the Fireblast. You know…that guy. Fun Police.

Your deck is, as I said, reasonable. It isn't some busto Storm-Cube or anything, but the kind of deck that can eke out a 3-0 with solid play and a little luck.

Your opening hand was:

Your eighth card was a third Plains.

● Twenty life● Eight cards in hand (as above)

The opponent started on Mountain into Jackal Pup. You have an eight-card hand that has quite a bit of red-hating to it!

The question here is a little different than we normally ask.

No one is asking what play you're making right now or anything on specific sequences just yet. Instead, this two-parter:

a. How many cards in hand do you plan to have when you start your next turn?b. Which cards will they be?

The answers to those two questions together will imply what you "did" / would have done on your first turn, plus give an idea of your strategic approach.

If you're just joining us, this is Make the Play Monday!

Every week on Make the Play Monday we propose one or more scenarios and ask the TCGplayer.com community to make the play for the situation(s) described.

The thinking is that Magic, especially tournament Magic, is ultimately a series of decisions. What deck you picked at the beginning of a day might be the most important decision; what land you play on the first turn might be a decision that leads you down one path instead of another; whether to kill a creature -- and what you use to do that killing -- are further questions that will cause you to increase, or decrease, your likelihood to win.

The bet is that if you make the better and better decisions, consistently, it should show in your performance with better and better results. Sometimes that is learning a new kind of sequence or tool. Sometimes a new shortcut. Sometimes learning about a simple rules change will open for you that you never knew about before, leading to untold heretofore-unrealized victories. Did you know, for example, that you can pay discounted delve costs when flashing back cards like Dig Through Time or Murderous Cut with a Snapcaster Mage?

As I've said, this column asks readers to make plays.

In the case of this week's column, I'm asking you to make some sort of arcane looking plays that I hope will be illustrative and useful in the greater context of your game play, even if they aren't linked to a particular format or popular deck right this second.

Though I'd hope that sharpening your decision making skills would be all kinds of reward already, Make the Play Monday is paired with a cousin column, Flores Rewards Friday every week.

Submit your plays in the comments below.

1. Play this, likely your final turn.2a. How many cards in hand do you plan to have when you start your next turn?2b. Which cards will they be?