Before we get to today's deck, I'd like to tell you something about this card Goblin Guide.

When Goblin Guide was first spoiled, I didn't like it at all. It was printed as part of Zendikar, which was the "landfall" set. My friend Luis asked me if he should pick up a set of Goblin Guides for $5 each and I shook my head.

"Constructed Unplayable!" I proclaimed. "This is a landfall set. Not only does Goblin Guide give away card advantage in the traditional sense," I argued, "but in the context of a landfall set, it is just going to make sure the opponent always hits!"

I ended up being wrong about Goblin Guide.

A handful of years later, I can hardly think of a creature that I have more fun playing with. Goblin Guide and I have become buddies, perhaps ironically in the context of a format where the opponent can Brainstorm into exactly the kind of horror stories I originally envisioned. If not for one good outing with Deceiver Exarch I can hardly remember winning more money with any other creature but Goblin Guide.

My daughter, on the other hand, comes from a serious chess background. Goblin Guide is her all-time favorite creature. "Goblin Guide is great!" she has always thought. "It tells you what your opponent is going to draw so you can always make the best play."

"That's a heck of a lot better than my original evaluation of Goblin Guide."--noted Goblin Guide master, Patrick Sullivan

This is a column about making the best plays.

Why bring up Goblin Guide now?

Last week I lamented a Fact or Fiction split that revealed the opponent might get a Devil's Play that could handle the Stormbreath Dragon I needed to win: 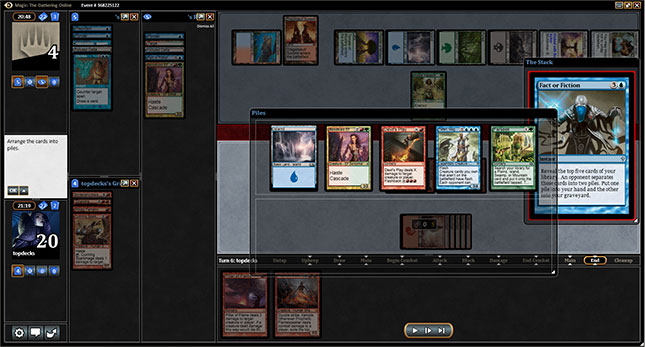 At the time I thought I had to gamble on his not having a third red source, and split four-one to try to disincentivize him from being able to take out my Stormbreath Dragon. 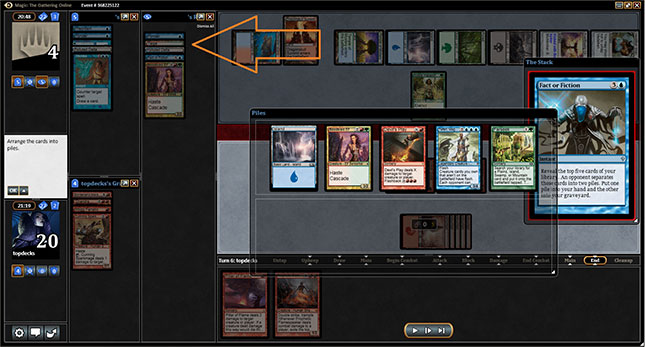 On one hand, I feel a little better about not winning that draft, in hindsight. It really was impossible, I guess.

On the other hand, he already had the red, and my Goblin Guide told me he had the red...and I not only missed it but used it as a dumb-o example.

Kyle Barrow pointed this out in the comments of last week's Flores Rewards Friday...and I figure the best Penance I can do is throw Kyle a $25 TCGPlayer.com gift certificate. Bonus! (Kyle, message our Facebook page to receive your reward! - Frank)

Thanks for keeping my chin clean, Kyle.

Okay, now for this week's how tech:

At the time of this writing I've just gotten finished watching Dylan Donegan dismantle the StarCity Invitational with this Yuuya Watanabe special. I've rarely seen such a beatdown, and I've been watching competitive Magic closely for nearly to twenty years.

Just a few weeks ago many of the best minds in the game had Mantis Rider as the defining card in the Jeskai deck, but Watanabe (and by extension Donegan) cut Mantis Rider in favor of three-drops like Hordeling Outburst.

On a card-for-card basis, Hordeling Outburst is three power and three toughness across three bodies for three mana; Mantis Rider is also three power and three toughness for three mana...but comes with a stack of abilities including both flying and haste (i.e. two of the best abilities ever for a combat creature). By any measuring stick, Mantis Rider is a very good creature.

Subtly, playing a tokens deck instead of a regular awesome creature like Mantis Rider helps with another stripe of mana discounting. Spells - that is spells that go to the graveyard like instants and sorceries - are better than creatures (that stick on the battlefield) in the Jeskai deck because putting cards into your graveyard helps to discount for delve.

Watanabe's build is quite an interesting study in killing your darlings. It Removes the seemingly spoken-for Mantis Rider for ostensibly weaker, but contextually appropriate, other options. If you haven't seen this version of Jeskai running you're in for a treat. It does many things well, beats down quickly, is great at seizing the initiative, can finish a game without having to deal the last few points in The Red Zone, and has for all intents and purposes the second-strongest end game in all of Standard.

It's also pretty tricky to play. Every time you cast a noncreature spell with Jeskai Ascendency on the battlefield things start happening. What should you discard? Should you draw a card to begin with? At the same time, you're constantly fattening your graveyard for Treasure Cruise. It's possible this isn't just a great synergy deck, but actually aces on card power. It's tough to imagine a better pair than Jeskai Ascendency and Treasure Cruise right now.

Last week we discussed some pretty cerebral (and hopefully illustrative) Steam Augury splits. This week's is a mite more straightforward: 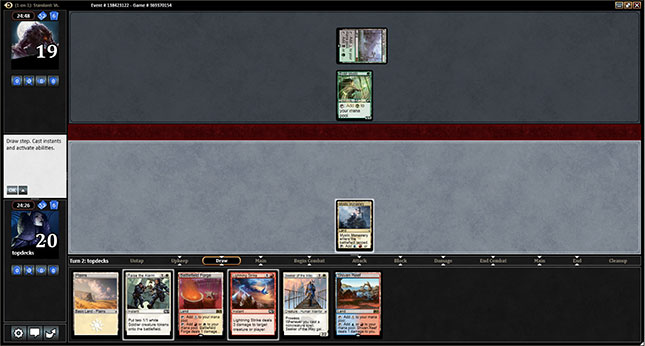 We've started on a mulligan but opened on a pretty signature turn one, Mystic Monastery.

The opponent has taken a point to start on Llanowar Wastes into Elvish Mystic.

It's game one so we don't 100% know that the opponent is. Llanowar Wastes is a clue but can represent everything from Abzan to Abzan Reanimator to Sultai Reanimator to GB Devotion to GB Constellation...at least!

For a six-card hand we have an embarrassment of riches on turn two; our choice of lands and spells (or sitting back). In fact we can cast any spell in our hand, if we wish:

This is Make the Play Monday! Like every week, we are proposing a hypothetical and asking the TCGplayer.com community to make a particular play.

Our belief is that Magic is largely a series of decisions, and that better decisions over time will drive better results. Jeskai Tokens is a deck that is almost indubitably going to be a force in Standard, so don't be surprised if you find yourself in a spot begging you to choose between playing offense or sniping a mana accelerator!

Please provide your answer to "Play Your Second Turn" in the comments below. We will come back on Friday, and I will discuss this play with a Celebrity Guest. One lucky reader who made the play I made will win a $25 TCGplayer.com gift certificate; and one who agrees with the Celebrity Guest will also win a $25 TCGplayer.com gift certificate! Just in time for the holidays!

As you have already read this week, we've already tipped our hat to the analysis of reader Kyle Barrow. Want a chance to join Kyle?

Thanks for reading. I look forward to your comments and will be back Friday!