Over the past couple of weeks I've talked about playing an Abzan Midrange / Abzan Control deck in some local Preliminary Pro Tour Qualifiers...with little luck. After presenting my case to my Top Level Podcast partner Patrick Chapin, the two-time World Championships finalist came to the conclusion that, based on the New York metagame of tons and tons of opposing Abzan Control decks, the right strategy would be to play UB Control.

UB Control was a deck that was favored by the Pantheon at Pro Tour Khans of Tarkir, but failed to make Top 8 despite being championed by some of the greatest technicians on the planet. In the current metagame, UB Control might be a good choice because it has more than enough fast answers to threats that all cost three, four, or more mana, especially when the opponent opens on, say, three consecutive lands that all enter the battlefield tapped.

But make no mistake!

Choosing UB Control is a gamble, at least to an extent. As solid as Disdainful Stroke is against Siege Rhino or Elspeth, Sun's Champion... It's kinda sorta gawdawful against Goblin Rabblemaster or Satyr Hoplite. If your local metagame is heavy on dedicated aggression, you should probably look elsewhere for an edge.

The UB Control deck at hand has a number of updated features from new set Fate Reforged; most importantly the eight-drops at the top end. Ugin, the Spirit Dragon gives this strategy a better finisher than "just" the classic Pearl Lake Ancient or Prognostic Sphinx. Ugin costs a little bit more, but is basically unbeatable unopposed. Ugin can kill small creatures, kill lots of creatures (and planeswalkers, and enchantments, and whatever else you need to kill), and even gain tons of life! In addition, the presence of a card that can sweep many permanents laterally eases up our requirements on the Perilous Vault end. Perilous Vault can be a powerful defensive card but is exceptionally mana intensive.

The numbers in this deck were up for quite a bit of back and forth; I originally wanted to play Despise, but it didn't even make our 75! At least Disdainful Stroke survived. Patrick was a big advocate of 27 lands in this build. You can see (or rather listen to) how we landed on this seventy-five here.

All our scenarios today involve the play of this UB deck.

Dedicated Control decks require different kinds of decision making than beatdown, midrange, or certainly combo decks. Early on in the universe of Magic theory, it was generally accepted that control decks were / are more difficult to play properly than beatdown decks, but this sentiment is no longer universally held. Control decks tend to have more powerful cards than their competitors, as well as tools to elongate turns and games. Play to stretch the game and you will usually expand on your advantages. Misplay and you might just have a card drawing spell to help dig you out of your screwup, and into your next removal piece.

Here's a softball to start:Scenario One

We've won the roll (hooray) and have a keep-able but potentially disastrous draw of: 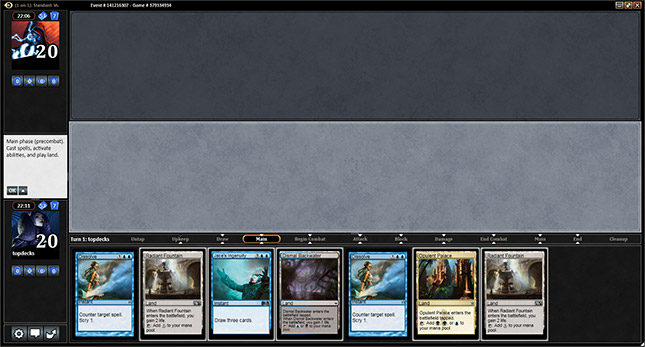 This hand is keep-able because it is actually dominating in some matchups (four lands to open plus two unconditional Counterspells and a Jace's Ingenuity are about as good as it gets in a Control mirror), and even in fast matchups we have Radiant Fountain to blunt the opponent's offense.

We're on the play.

We don't know what deck he is.

I think Scenario One has a pretty cut-and-dried "right" answer...but this one is a little more difficult:Scenario Two

You are on the draw. The opponent has taken consecutive turns of Temple of Triumph and Bloodstained Mire but has not yet made a non-land play (this might be because of the ill luck that puts him, here on turn two, at only four cards in hand).

Nevertheless we've got to make our play.

We opened on an Opulent Palace but that was easy. We had no spells to cast and it was our only land that entered the battlefield tapped. 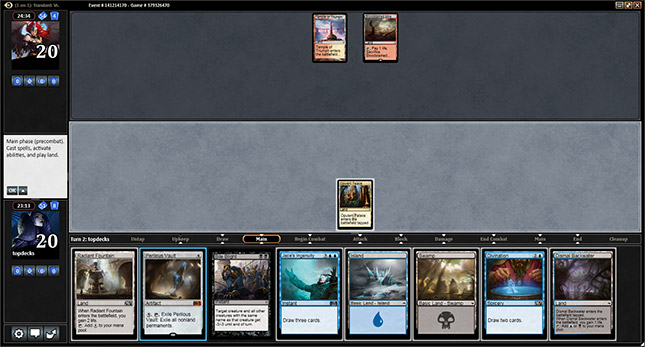 Last one (for today):Scenario Three

It is pretty deep into the game. The opponent is swinging with three Goblin Tokens, care of Hordeling Outburst.

We've had a Perilous Vault for a few turns but this is our first turn with five open mana.

It's combat. You have a live hand of:

Though the opponent is bringing three Goblin Tokens, you've presently got 11 life to his three cards in hand.

What are you going to do in combat?

A. Use Perilous Vault?B. Wait and see?

Why A? Why B? Hero's Downfall one token? Something else? 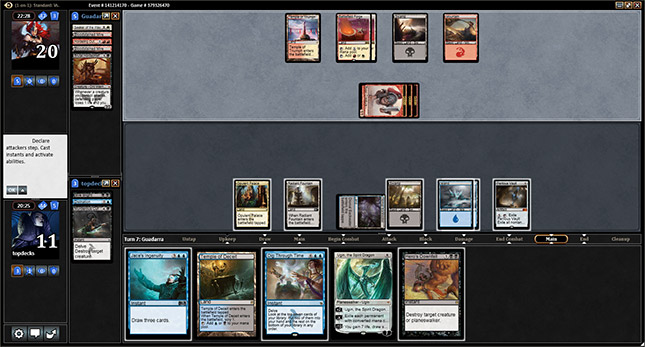 What do you do this combat...and why?

In case you are just joining us, this is Make the Play Monday: TCGplayer.com's weekly column that asks the community to make the play when posed with a Magical decision (or three).

Magic, you see, is a game, ultimately, of choices. We make choices before the tournament starts (what deck to play, whether to show up at all), and then have choices and opportunities turn after turn and play after play.

While one decision (typically a bad one, or a mistake) can sometimes cost us a round or a tournament in its entirety, in most cases making good decisions -- and making them over and over again -- will improve our chances to win.

The goal (if you want to win more at Magic) is to improve your ability to make these choices accurately.

How do we do this?

We practice making decisions of course!

Make the Play Monday gives players some common, or at least illustrative opportunities to do just that. Today I asked you to make three:

Submit your answers in the comments below!

On Friday we will come back to these in-game decisions and review some of the possibilities. I will say what I did in these spots, plus pull in a Celebrity Guest to add his thoughts to the decisions and opportunities.

Submit your answers in the comments below!