There are some super goodies in this pack!

Once we get to the decklist it will be obvious what card I took first pick first pack in this Legacy Cube draft.

However -- again, begging you not to look ahead -- I ask you what pick you think I made...not necessarily what you would have made (though the two picks can obviously come out the same).

Okay, if it isn't obvious to you already, the topic of this Make the Play Monday is Legacy Cube. Legacy Cube just came out on Magic Online this week and it looks to be an extraordinary Limited format, with power cards, strategy and planning, and good old fashioned fun overlapping in every pack.

I suppose skipping ahead a little bit you can figure out what I took in the pack; this is the final deck: 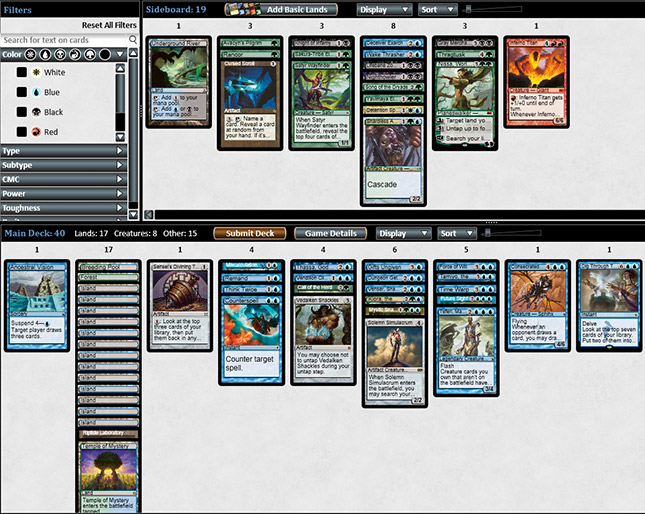 1 Call of the Herd

So obviously, I took Vedalken Shackles first pick. I think that Vedalken Shackles was far and away the most powerful card in the opening pack. Though usually I try to force monored in Cube, Neither Prophetic Flamespeaker nor Devil's Play made me want to give up a card on the order of Vedalken Shackles that can either relentlessly grind down an opponent or just take one huge threat and kill him with that.

I was relatively well rewarded in this draft, including getting a fifteenth-pick Shardless Agent (which didn't ultimately make the cut). While that Simic card didn't make it into my starting forty, I kept both Kiora, the Crashing Wave and Mystic Snake. There are a lot of good cards in this deck, but the pocket synergies are pretty absurd (Future Sight + Sensei's Divining Top anyone? Planeswalkers and Time Warp?) What might be pretty typical of good Cube deck is the quality of my sideboard. I drafted a Planeswalker / Time Warp deck and Nissa, Worldwaker didn't make my cut! Ditto on Thragtusk. Just too many five-drops in this deck, so I went with Call of the Herd instead.

It's the second match of our draft (we won the first).

We set up the opponent with Vendilion Clique, seeing the following: 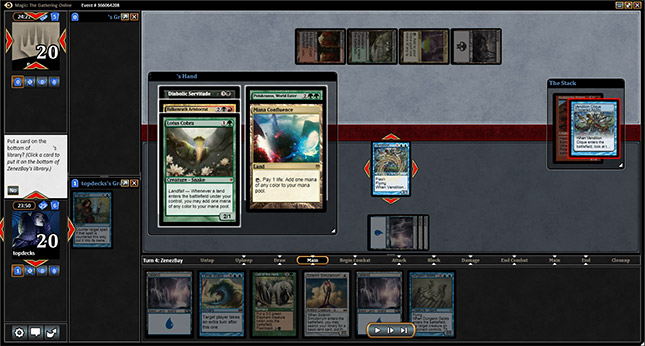 We set up the opponent with Remand, bouncing the Lotus Cobra back to his hand.

Now at the time we played Vendilion Clique there was an Avalanche Riders on the stack, so we sent Diabolic Servitude to the bottom of the opponent's library, but were forced to leave Falkenrath Aristocrat and Polukranos, World Eater as future plays.

Fast forward to a turn later. 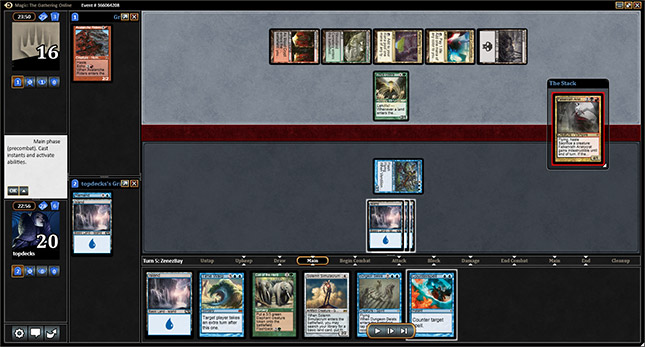 We're back on three Islands.

The opponent has re-played his Lotus Cobra and is firing off Falkenrath Aristocrat.

Given our hand of:

...how do you deal with the Falkenrath Aristocrat, if at all?

You make the play!

Last one for this one.

It's game one of the finals of the draft.

We started off on six cards but had Ancestral Visions on the first turn.

We gambled on a Call of the Herd on the third turn; the opponent tapped two, but it turned out to be just Impulse.

We got a little stuck on mana but Ancestral Vision fired, filling up our hand. 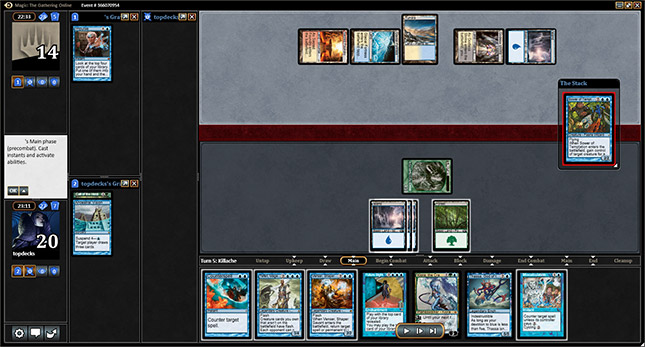 As it stands we have four open lands (again, with a miss or two along the way), and a tapped Elephant Token (beating down).

The opponent is trying for a Sower of Temptation; we can answer with one of:

How do we stop the incoming Sower of Temptation...or not?

As with every week, or at least most every week, I have presented you with some positions in some games of Magic: The Gathering. Our belief is that Magic is a game of decisions stacked on more decisions, so that getting good at decisions can, and should, over time, bring you better results on average.

Please share your responses to this week's questions in the comments below:

1. What do you think my first pick was? (Don't cheat!)2. How do you deal with the Falkenrath Aristocrat, if at all?3. How do we stop the incoming Sower of Temptation...or not?

On Friday I will be back with my proposed solutions to these questions...and bring along a Celebrity Guest for an additional expert perspective.

One lucky reader who agrees with my plays will earn a $25 TCGplayer.com gift certificate on Friday.

In addition, one lucky reader who agrees with the Celebrity Guest will also earn a $25 TCGplayer.com gift certificate.