I recently came around on Abzan.

I know that might sound like an odd thing to hear; if you had listened to my podcast review of Khans of Tarkir you know that Siege Rhino (the quintessential Abzan threat) is my favorite card from the set. And of course Ari Lax got the Pro Tour Top 8 monkey off his back with a big win with -- you all know already -- Abzan.

So what do I mean by coming around?

I figured that, while Abzan does have some efficient cards, in particular midrange cards, it would have problems dominating the Standard format in the long run due to being inevitably pinned by green-based Ramp / Devotion decks. A 4/5 trampler for four mana is cute and all...but it just isn't impressive compared to a 9/9 with built-in card advantage, you grok? Trouble with all the midrange decks, no?

When I won my Grand Prix Trial for GP New Jersey, for instance, I beat more than one midrange deck, including a 2-0 sweep of stock Abzan in the first round.

Abzan is the most customizable deck in Standard.

You want efficient threats? They're pretty much obvious.

Life gain? Options aplenty. Some attack; some block; all keep you breathing.

Card drawing? It's almost like you're a blue deck!

You don't have-have to make it like Ari Lax if you don't want to. You don't have to play Ajani, Mentor of Heroes or raid the opponent with Wingmate Roc. You'll probably want to play Siege Rhino no matter what, but a lot of the rest of the deck you can make up around what you want to play.

Here is a version of Abzan I have been kicking around. It incorporates two differentiating themes:

1. Everything I talked about last week with a focus on Sorin, Solemn Visitor; if Sorin is fast in B/W...how fast can we make him with a turn two Sylvan Caryatid? Four copies, natch.

2. More, and faster, creature removal. Ivan Jen has drawn a deep line in the sand of Standard with his Jeskai Heroic Combo deck and while that deck might not represent a clear break in the format, it does force the rest of the room to think about incorporating quick creature removal. For example in my build there are more and more copies of Bile Blight and Drown in Sorrow in the sideboard, rather than the typical catch-up cards like Nyx-Fleece Ram that I am wont to incorporate.

In addition to just playing more removal than average, you'll notice that there are 1) more lands, 2) more card drawing, and 3) more big spells than usual. The deck needs to both speed up with cards like Bile Blight and go bigger with cards like End Hostilities and Garruk, Apex Predator to get going what it wants to get going.

In a sense, this is a weaker proactive deck than the stock Abzan with all efficient attackers like Anafenza, the Foremost and Wingmate Roc, but it can overpower those decks with tons of card advantage and removal so long as it can stabilize on life total. Because it plays more lands and more removal, there is just less room to do the stuff you want, so you need to run a really big spell or so, like Garruk, Apex Predator, to do the work of multiple other pieces of cardboard.

Decks like this have powerful end games but tend to be somewhat more draw dependent. You need to draw your Bile Blights early and your expensive Planeswalkers late; kind of the opposite of a Boss Sligh deck, which is so quick and steady; but relatively limited in terms of upper power level. On the other hand, you can customize this deck with four copies of End Hostilities, fueled by tons of card drawing, to Demolish intuitively advantaged decks like Green Devotion. As not-just-cute as their big threats can be, they can still run out and you can pretty much blow up anything they try to throw (or trample) your way.

One thing to note before we go into hypotheticals for the week is on the mana base.

I would argue that if you decide you want to play twenty-five lands the more intuitive mana base is this:

I played that mana base for a while but while it is pleasant aesthetically (five basics including two End Hostilities and Elspeth, Sun's Champion-powering Plains) it is a mite shy on black. This version of Abzan sometimes needs BB on turn two for Bile Blight; has BB all over the place (Hero's Downfall and so on), and a sideboard full of black mana. Moreover I found myself wanting black that came into play untapped and didn't hurt me. Hence, the swap of one Temple of Plenty for Urborg; though I think I want one more source of black mana (more on that later).

We win the flip and choose to play, but have rather an un-keepable hand of:

If we knew what we were going up against, this might be a reasonable keep... But we don't at this point know what deck the opponent is. So ship!

This six-card hand isn't perfect, but it's a heck of a lot better than the seven-card hand. Plus, Temple of Plenty can help dig us to our deficiencies.

We played turn one Temple of Plenty, revealed Garruk, Apex Predator, and pushed the big guy to the bottom.

Lands got played; no one did anything big for a while, and we finally played Sandsteppe Citadel on turn four, resulting in a turn five Abzan Charm at the end of his turn as a test spell.

Abzan Charm resolved but untap--into--Siege Rhino didn't work quite as smoothly: Disdainful Stroke got us there.

So...several turns have gone by and there are no Hushwing Gryffs or Mantis Riders buzzing around our heads; but the opponent has run maindeck Disdainful Stroke already. If you haven't internally calibrated yourself away from Jeskai Aggro to a more methodical version let this be a note in that direction.

Anyway, with most of our mana tapped, the opponent made a Sarkhan, the Dragonspeaker and whacked us.

On our turn seven we found ourselves in a situation with some options. But perhaps more pronounced than usual, there wasn't much use in exploring any but one. Our seventh land came into play tapped, and we had to commit both of our free black to the project of casting Hero's Downfall.

It's important to note that I used Hero's Downfall on main phase here. No need to try to leave options open when we only have the one! Got Sarkhan while the opponent was tapped out, rather than give him the option to Dissolve. 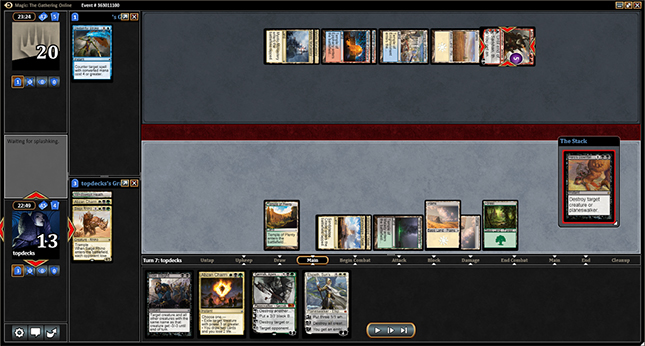 The opponent, though, seemed to like how things were going prior to our Hero's Downfall, untapped, and made another Sarkhan, the Dragonspeaker! Whack again! 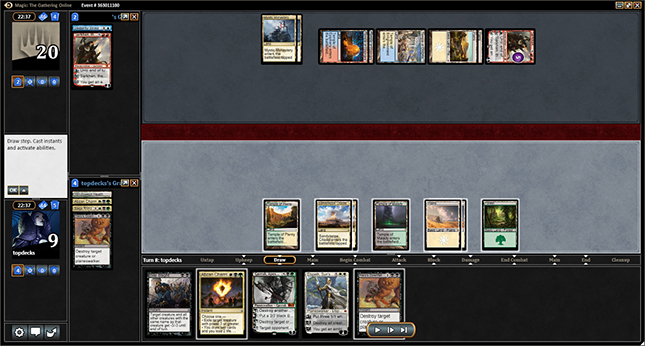 Look closely. The bad guys have two up and four cards in hand.

We have quite a few good options in hand, but only one line is going to be best. Do you know what it is?

The opponent has only shown us two kinds of cards so far: Sarkhan, the Dragonspeaker and Disdainful Stroke.

For our part, we're dangerously down to nine life; but our cards in hand have every opportunity to help dig us out of it!

For those just joining us, the general precept of optimal Magic play is that there is only one right play, and every other play is a mistake.

A kinder, gentler, way of thinking is that there is only one play that maximizes a player's chance of winning a game; and while other plays look close or can still lead to victory, they are by definition less likely to do so (by extension, it is quite possible that the best play sometimes leads to defeat).

Magic, competitive Magic at least, is essentially a game lacing decisions after plays after opportunities to make decisions and choose plays. Getting better at Magic is largely about finding the best plays to make, and learning the tools that help make them consistently.

That's where Make the Play Monday comes in!

Every week we present situations like today's (play turn eight) and ask the TCGplayer community to puzzle through them. On Friday, I go over my answer to the spot, plus enlist a Celebrity Guest for an additional, expert, opinion.

Play turn eight. Submit your play, in the comments below and I'll be back Friday.