At least if we consider only publicly known technology (because who knows what might be hiding behind the next Grand Prix Top 8) probably the coolest current deck strategy in the Standard format is GB Dragon Megamorph.

I saw the 10th and 11th place decks from Grand Prix Shanghai a couple of weeks ago and immediately got bowled over with a variety of emotions: wishing one or both of Mihara or Watanabe had made the actual Top 8 cut [for potentially greater acknowledgement of their deck], a children's storybook monkey-like curiosity ("how do these cats actually figure to casting all these spells?"). And of course a bitter envy. Given enough time and motivation I fancy myself able to "get there" most of the time with most deck ideas and builds...but not this time. The masterful overlay of a dedicated Dragons strategy on top of the twin It! Girl! BFFs of the Megamorph set is not something I would have likely been able to discover, uncover, or forge myself. Envy + admiration. Bravo gentlemen.

From one perspective the deck takes largely the Dragonlord suite from my RPTQ deck and adds them onto a different color combination. I'm not actually sure what was more ambitious: playing Dragonlord Atarka via a monoblue mana base deck or playing Dragonlord Ojutai in a GB Megamorph shell; though I would tend to give them the nod. Mihara and Watanabe actually have to cast all these spells.

You have a deck that wants B on turn one for Thoughtseize, G on turn two for Sylvan Caryatid or Satyr Wayfinder; GG on turn three for Courser of Kruphix or Deathmist Raptor, and B or even BB under pressure for creature defense (Hero's Downfall main and Drown in Sorrow side). All this before you add the W (Dromoka), U (Silumgar), UW, or RG splashes!

Despite the ambition of this deck's mana base, the GB version loses the most powerful aspect of my deck, which is sandbagging 100 counters on Crucible of the Spirit Dragon* in anticipation of further shenanigans, but the addition of Satyr Wayfinder allows the Japanese Dragon deck to play like it has more than "just" the four copies of Haven of the Spirit Dragon.

Satyr Wayfinder actually lets you bin a Dragonlord early while nabbing the Haven of the Spirit Dragon, so you can make a land drop now while stockpiling a potential game-winner several turns down the line.

Dragonlord Dromoka is weaker in this deck as here it is a mostly fair (if still very good) Magic: The Gathering card. The monoblue deck landing Dromoka is essentially the first domino falling before an eventual fall (whether it is that turn or several turns down the line). The GB deck lacks the ability to lock the opponent out of half his mana once Dromoka lands; rather here it will often just die when the opponent untaps. Still a gigantic Baneslayer Angel though and, ergo, very good; and still capable of a Dragonlord Silumgar tag team match against control.

But the real gold here is the overlap of Satyr Wayfinder value (including both card advantage and Haven of the Spirit Dragon synergy), megamorph value (where Satyr can catalyze selection or card advantage via Den Protector and especially Deathmist Raptor), and the Dragonlords giving the deck ultra-high end threats to make both mana more meaningful and recursion more potentially backbreaking, because good recipes become great ones with better quality ingredients!

All that recursion (four Havens and four Den Protectors) gives this strategy a subtle more-sies way to win. It just has more awesome stuff! Think about how high impact one Dragonlord Atarka is for most opponents. How many ways does the average deck have to deal with a giant 8/8 flyer that is simultaneously taxing the opponent's creatures or planeswalkers?

Well what if you have to tangle with the same Atarka, say, nine times?

The $50,000 TCGplayer MaxPoint Invitational is right around the corner, putting an even brighter spotlight on Standard than usual. There are lots of powerful decks in Magic's most important and widely-played format, but as far as known quantities go, Dragon Megamorph seems to have the most going on.

Let's take this coolest of options out for a few test drives, shall we?

It's our turn three against what looks like a UW Heroic deck (though it can certainly be one of the red or green splash Heroic decks).

The opponent played a second turn Hero of Iroas and followed up third turn with arguably his best (or at least most synergistic) plays, Ordeal of Thassa.

The opponent came in for four damage, putting us to 16 and passed with a pair of Plains up.

We've got quite a few options for the turn; the Dragon Megamorph deck after all has quite a few three mana plays (you know, at the very least, the Megamorph twins). 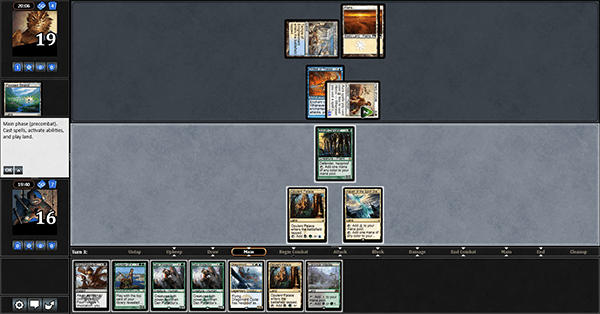 Scenario One asks - How do you play this third turn?

This time our back is against the wall against what looks like Atarka Red.

For a second I had a little trouble identifying what the opponent was playing because he led on Wooded Foothills for Forest. It was Forest into Dragon Fodder. He traded half of his Dragon Fodder and all of his first Wild Slash on my Deathmist Raptor, then it was more and more 1/1 tokens.

A pair of Coursers slowed the game down just a little bit while Goblin Rabblemaster further loaded up his side of the table; you'd think a Stoke the Flames on one of those Coursers would have been a bad thing pre-combat…but it actually gave me an additional card in graveyard to play a Murderous Cut. This was important as I was loathe to Delve with the Deathmist Raptor (which is still in our graveyard).

Taking some lumps I took four more via a pair of Thoughtseizes, removing Hordeling Outburst and Monastery Swiftspear respectively, but leaving him the nth Dragon Fodder.

And so we're here: 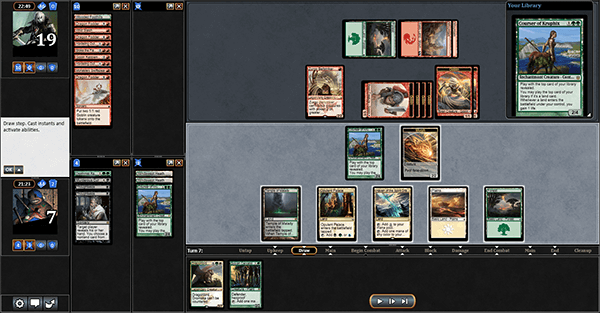 We've kind of stabilized but are not really safe against a deck with a massive material advantage on the battlefield + Stoke the Flames and other burn hiding somewhere in those mysterious 46 cards. We can play for this turn or next turn, and know a third Courser of Kruphix is waiting on top for us should we survive.

How do you play turn seven?

The focus of this column and its sister later in the week is to hone the tactical ability of readers (and myself to be honest).

We present situations like these two with Dragon Megamorph every week and ask the TCGplayer.com community to weigh in on what they'd do. Please answer the above two scenarios in the comments below.

The reason? All choices in Magic give us the opportunity to either increase our chances to win or blunder our chances away; the best way, therefore, to improve our play is to learn to make better choices so that when we are actually presented them in tournaments, we can make the best plays!

In addition to working towards stronger play for all, we like to sweeten the pot a wee bit.

One lucky reader who agrees with YT will receive a $25 TCGplayer.com gift certificate on Friday.

And one who agrees with the Celebrity Guest will also receive a $25 gift certificate.

...and on the subject of prizes I would like to take a moment to address some old (and somewhat less old) business. Some of you might remember that the week before the Regional PTQ in Utah we had an odd week that promised extra prizes but paid out none (on account of no winners).

Well last week I made an embarrassing Misstep in one of my Flores Rewards Friday responses. It was a flawed line based on, um, not knowing the correct hard casting cost of Kolaghan, the Storm's Fury. I don't think it would have actually changed my play, but I did get something factually wrong. A couple of readers took me -- understandably and probably properly -- to task over it. For keeping my nose clean I'd like to offer them some preliminary prizes.

So congrats to John Martin and Tom Klenotic for rightfully calling me out on casting costs! $25 TCGplayer.com gift certificates to you both! Make sure you send a message (not a wall post) to our Facebook page - MTGatTCGplayer - to claim your prize!

You know what to do in the comments below.

* Don't believe me? That was foolish. Brendan Hurst won a Preliminary Pro Tour Qualifier with the Monoblue version just a week or two ago. Check out what Crucible of the Spirit Dragon does to his Dimir Control opponent here, even when Brendan is missing land drops!