For this week's Make the Play Monday scenarios we are once again using Abzan Midrange as our Weapon of Choice.

For purposes of these hypotheticals, our list is the same one discussed last week:

While there are lots of players putting their faith in Siege Rhino, there are a couple of things that are little different going on with this deck. First off, it packs four copies of Satyr Wayfinder. Satyr Wayfinder helps to smooth out the early game, and gives you something proactive to do with your mana on the second turn. While this is not a dedicated graveyard deck, Satyr Wayfinder helps to set up your powerful (if slim number of) delve cards: Tasigur, the Golden Fang and Murderous Cut.

The one card (next to Siege Rhino, I guess) that "everyone" has in their Abzan decks is the one I cut. Instead, we have twelve Temples (Temple of Plenty taking the place of Sandsteppe Citadel). In theory these Temples should give us an edge late game, when Scrying can help us to win topdeck wars or hit the eighth land necessary for Ugin, the Spirit Dragon.

Plus, we just have more Fate Reforged gas than is typical right now; Ugin yes, Tasigur, the Golden Fang yes: two copies + a third in the sideboard of each powerful bomb.

If you think you've got your bearings with the deck, why not move to...

Our Abzan Midrange deck is up against an Abzan Aggro deck.

Abzan Aggro is of course differentiated from a deck like ours by having more attack oriented drops; instead of card advantage creatures like Satyr Wayfinder on two, they run heavy fisted damage-dealing beaters like Rakshasha Deathdealer and Fleecemane Lion. Creatures like those can get the jump on us because we can't block them efficiently early or, depending on the opponent's mana situation, ever.

In this game's scenario, the opponent hit a Fleecemane Lion on curve and is showing no signs of slowing down with it.

We rattled off consecutive drops starting on turn two:

We, not surprisingly (unless you're a Vampire fan), put Sorin to five loyalty to buff our two guys on the battlefield.

The opponent played his fifth land and trucked in with the Fleecemane Lion, sending it at Sorin, Solemn Visitor.

How do you block, if at all?

Everything has been going Piznarski for us this game; like I said, we hit our curve from turns two through four. The opponent, on the other hand, has five lands on turn five, but hasn't played anything but his Fleecemane Lion thus far.

The Lay of the Land:

Courser of Kruphix is telling us that Ugin, the Spirt Dragon is coming up. 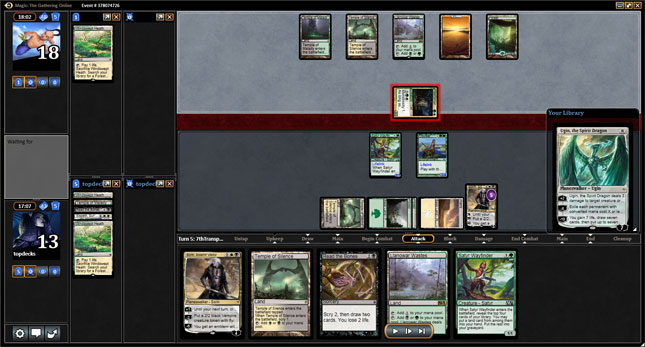 In this scenario we have gone much deeper into the back and forth with an opposing set of Forests, Plains, and Temples.

The opponent has got a mini-menagerie of threats including a Rakshasa Deathdealer, a Siege Rhino, and the Bird Token from a now-dead Wingmate Roc.

You know those games where the opponent makes some moves, but then undoes them? And MTGO shows you? I think the opponent was initially bullish on crashing with some of his creatures, but thought better of it when considering his own nine life.

You see, we've got a pretty good trio of creatures ourselves: a Courser of Kruphix, a Siege Rhino of our own, and Tasigur, the Golden Fang. These three creatures can deal ten damage (i.e. one more than the opponent's got), which might explain why he didn't attack last turn.

Pre-combat we cast a Read the Bones to grab the Sorin, Solemn Visitor that was on top of our deck (thanks for the info, Courser of Kruphix!)

Now we've got four mana open, but have not yet played a land. There is a Windswept Heath on top of our deck (thanks again for the look, Courser of Kruphix!)

We have quite the grip thanks to Read the Bones:

Play the rest of your turn. 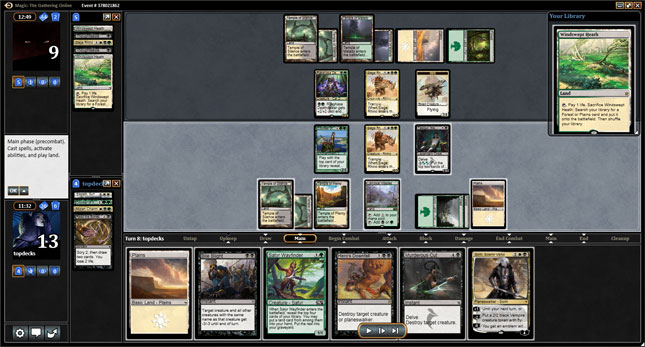 Magic is a game, ultimately, of decisions. If you make better decisions, over time, you will find more success in Magic.

This is Make the Play Monday, a weekly column where we ask the TCGplayer.com community to consider in-game scenarios. This week we asked 1) How do you block, if at all? and how to 2) Play the rest of your turn.

Submit your responses to these two questions in the comments below!

I will return to these moments of Abzan-on-Abzan violence on Friday, and go over what I think are the right ways to play these positions. As usual, I will be joined by a Celebrity Guest (who will also weigh in on the right plays).

One lucky reader who agrees with my take will walk away from Friday with a $25 TCGplayer.com gift certificate...

As will one lucky reader who agrees with the Celebrity Guest's plays!

As always, the goal is to walk through the plays and ultimately end up all making better ones; better plays, better positions, more wins, et cetera.