To begin this one, some legends from when I was coming up as a player…

1. Every decision you make in Magic is an opportunity to gain or lose value (you may have heard this somewhere). A small number of players in the 1990s discovered that they could play cheap blue cantrips and card drawing (especially one mana spells) giving themselves many more decisions than their opponents had the opportunity to make. Because these players were themselves very strong, the opportunity to just make more raw decisions could dramatically improve their chances to win over time, because they were consistently netting value with each of their additional decisions. Magic: The Gathering Pro Tour Hall of Famers Jon Finkel and Kai Budde were players in this group.2. For every four cheap blue card drawing spells a deck plays (you know, the Portents and Impulses of the world; or the Thought Scours and Serum Visions today), a player can Remove two lands. This gives the player more room for more "stuff". You could dig for lands early and dig for not just spells, but particular spells, later. This strategy was popularized by Hall of Famer Alan Comer.

Today most of my compatriots here at TCGplayer.com (and most of the Magic writing websites, everywhere) are focusing on the brand spanking new toys like Warden of the First Tree; Whisperwood Elemental; and Ugin, the Spirit Dragon right now (none of which are cheap blue card drawing). So I thought I'd take advantage of the gap in interesting Standard play on Magic Online to take a gander at another format.

Two-time World Championship Finalist Patrick Chapin recently called it "definitively the best deck in Modern" and this past weekend's results from Grand Prix Omaha did little to dislodge this conclusion, with the deck in question being the only archetype to score two copies in the Omaha Top 8.

The deck of course is UR Delver.

Chapin played UR Delver to the only perfect record in the Modern portion of the World Championship. What's not to love? The best deck (or at least the deck most favored by the strongest players) is magically legal in Modern! Treasure Cruise is so much stronger in Modern than it is in Standard because of the greater number of fetch lands + the many blue cantrips and cheap card drawing spells, but the deck has many incentives.

Playing only 18 lands (but double digit one mana blue spells), the deck can keep one landers fearlessly. From a pure card quality standpoint showcases all the best things you want to play blue and red for. What's better than Lightning Bolt?

How about three Lightning Bolts?

The only thing bad about UR Delver, if you can call it that, is that other folks have largely the same information that we do. They know that Delver of Secrets is maybe the best offensive creature of all time, and that Lightning Bolt is maybe the best red card ever; oh, and that Treasure Cruise draws three cards for one mana.

Which brings us to our current spot: 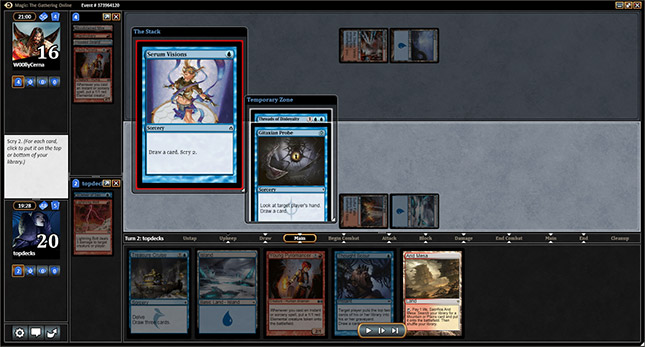 It is game two of a UR Delver pseudo-mirror.

We were able to Outmaneuver the opponent in game one; though if you didn't know what to look for it might have seemed unlikely that we did. For one thing we took damage from an early Gitaxian Probe and Arid Mesa and, despite those, stalled on two lands.

Our Delver of Secrets ate a Lightning Bolt; and our Young Pyromancer shared a Forked Bolt, but not before we were zinged for a point thanks to Vapor Snag. He not only hit the first Treasure Cruise, he hit a second. And meanwhile...we never saw a third land!

Being stuck on two isn't the end of the world when all your spells cost one; and being on the wrong end of fortune can have the side effect of focusing your play. So I focused on keeping my life total outside of bolt range, and it turned out.

The opponent's chief deviation in game one was the inclusion of Monastery Swiftspear's predecessor in Legacy UR Delver: Goblin Guide. So it seemed like guarding my life total seemed more important than traditional KPIs like hitting land every turn or even card economy because of the increased amount of haste.

In the scenario at hand we don't know anything about his hand (the only Gitaxian Probe we've seen this game is in the Sleight of Hand sub-decisions here), but we have to make an educated guess.

I started with Patrick Chapin's deck from the World Championship.

Since I was going second in this game, I decided to take out two mana permission spells Remand, Mana Leak, and Izzet Charm for Threads of Disloyalty, Electrickery, and Magma Spray. Basically, going second, all ways of containing a Young Pyromancer (including one way that can deal with lots of tokens at the same time). I decided to go the way of Carlos Romao on this one and ignore trying to fight Treasure Cruise, instead focusing on killing the things

So one of those ways has just appeared!

How did we get here?

The opponent opened by sending an Electrickery at our first-turn Delver of Secrets.

He then untapped and played Young Pyromancer.

The cards revealed are:

The question then was not whether I'd gamble on a turn-two Young Pyromancer (I generally would) but what I would do about his Young Pyromancer potentially going crazy. The answer was that I should just kill it, especially as I could use all my mana (all two of it).

The follow up plan of course being to play Young Pyromancer the next turn with the opportunity to trigger its token-making. In the mirror, a single 1/1 token can be powerful. There aren't a lot of ways to deal with mirror match tokens economically.

So the questions are: How do you resolve this Serum Visions? Now that there is already a Young Pyromancer in his graveyard, does that de-emphasize the desirability of this three mana sideboard answer?

These are questions for you to answer!

Remember: Every decision you make gives you the opportunity to gain or lose value in Magic.

As with every Monday I propose a scenario (or scenarios) and ask the TCGplayer readers to chime in on what they think they would do in a given spot.

To play, just add your description to the comments below!

The bet on Make the Play Monday and Flores Rewards Friday is that situations like these come up all the time. If you are better prepared going into one of them, you should be that much more likely to come up on top.

Comment on what cards to put where on this scry in the comments below.