So good news and bad news.

Good news - great news even - is that I'm back on the Pro Tour! Yeah! Taking it down in Utah last week was awesome, and all the attention that my deck got across the various Magic websites was quite the pat on the head.

For whatever reason all the stores in the NYC area decided to have their Preliminary Pro Tour Qualifiers (PPTQs) for the current season more-or-less simultaneously...and I wasn't paying attention the week[end] they did this. I missed almost all of them! One of the precious few remaining PPTQs was last week (you know, while I was in Utah)...missed that one too. So if I want to stay on the Pro Tour I have a limited number of options. Plan A of course is just to do well enough in Vancouver to stay there. But in the back pocket I also have a PPTQ opportunity this weekend (though by the time you're reading this it will already be over).

Can't! This time the PPTQ format is Modern, not Standard.

A few months ago my Top Level Podcast partner Patrick Chapin "invented" (err...innovated) Gurmag Angler in Modern. Gurmag Angler looks like a pretty weird card to consider, especially given a format as powerful and varied as Modern. But it turns out that the card has a lot going for it that is easy to see once you get past the garish upper-right-hand-corner.

But because Gurmag Angler has delve you can play it for cheap given remarkably little setup.

If you break one of your twelve fetch lands on turn one and play almost any of your one-drops - whether interacting with Inquisition of Kozilek or fixing your own draw with Serum Visions - you get two cards in the graveyard. Next turn you can break a second fetch land and play Thought Scour to put four more cards in your graveyard. Two plus four is six, so all you have to do is tap that land, and you've got yourself a Gurmag Angler!

There are certainly worse game plans than having a second turn 5/5 on the battlefield, but how you get that 5/5 on the battlefield matters quite a bit. Delve, to start, is very good. Because delve creatures eat your graveyard, they are inherently affect how big an enemy's Tarmogoyf will be early. And because Gurmag Angler is 5/5 (instead of, say, 4/5) it matches up well against Tarmogoyf or Siege Rhino in actual combat.

Not bad for a weird, fundamentally overcosted common!

Here goes the Grixis "Delve" deck I have been testing:

I tweaked this version of Grixis midrange from a recent Caleb Durward article.

The strategy echoes Patrick's undefeated UR Delver deck from last year's World Championships, adding the black delve spells to make up for the loss of Treasure Cruise due to that card's banning in Modern. So instead of accelerating out to a fast Treasure Cruise, this version plays an eight pack of huge black creatures (that also feature the keyword "delve").

The deck is very good at clearing the path for your big guys to win quickly via Lightning Bolt and Terminate. And while we no longer have Treasure Cruise, you might be surprised at how well Tasigur, the Golden Fang can close out a long game, one card at a time.

The mana base is slightly different than the mana base that Caleb used. I know the deck has slightly more black pips than blue pips (Liliana of the Veil has two; Gitaxian Probe kinda sorta has zero) but we rely heavily on blue lands to fix our draws. In addition, Tasigur, the Golden Fang needs UU to draw cards. It is less that we want a second basic Swamp to get out from under Blood Moon and more that we need faster operating mana, especially when under beatdown pressure.

In case you hadn't figured it out yet, we are going to run a hypothetical this week, based on the Grixis Delver deck.

Against an unknown opponent, on the play, we kept this: 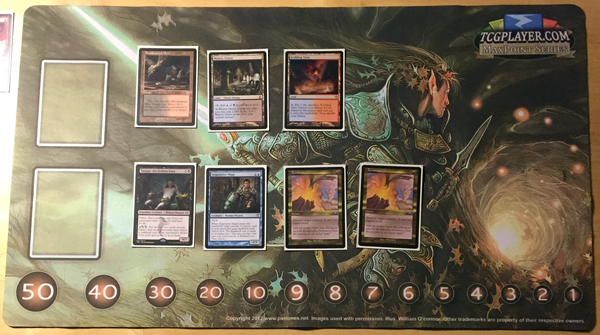 This is not the most exciting hand the deck is capable of, but I didn't think it was bad though to ship in the dark.

I played Watery Grave to start for two reasons:

1. Not knowing what might be on the other side of the playmats, who knows what lands we'll need?2. We don't have a one-drop, so we aren't in any particular rush right this second.

The opponent played a Mountain and got in with a Lava Spike.

We ripped Lightning Bolt, played one of our fetch lands, and passed.

The opponent, without playing another land [yet] ran out a Goblin Guide and sent.

So this is him: 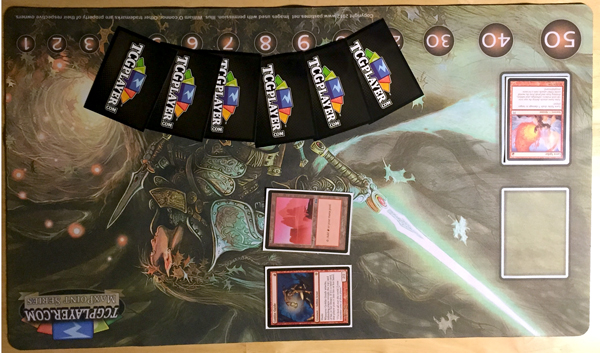 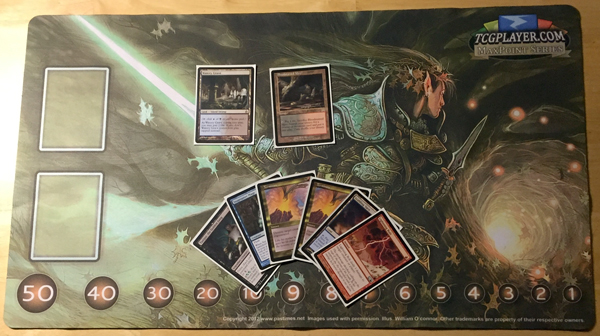 It's the opponent's attack.

What do we do?

Just one question this week. Say what you would do about it in the comments below.

Per usual (not last week, but like almost every other week for this column) this is Make the Play Monday, TCGplayer's resident column on Magic tactics.

We believe that Magic is ultimately a game of decisions. By making better decisions, over time, we can and should have better results. So we focus on decision opportunities like this one to hone the skills of readers (and writers!) alike.

So what do you do here, on the second turn, attacked by a Goblin Guide?

I'll come back Friday and discuss what I did / would do in this spot, with this deck.

In addition, I'll bring along a Celebrity Guest to weigh in on the play. Our Celebrity Guests have included Grand Prix winners, Pro Tour Top 8 competitors, World Champions, and other luminaries of the game. I have felt privileged working with them on Make the Play Monday / Flores Rewards Friday, and hope that you have learned as much from their takes on these plays as I have.

And of course, we will pick some lucky winners!

We'll be looking for opportunities to distribute some additional prizes, so be eloquent as well as focused.

Comments below: how do you play through this turn two attack?