Assuming the planets align favorably I'm going to be able to take a swing at a big Standard tournament (SCG Open in Somerset, NJ) this week. If nothing else, I'll be able to meet up with my good friend (and two-time Flores Rewards Friday Celebrity Guest) Patrick Sullivan.

Testing had largely been miserable.

Up until earlier tonight I didn't like hardly anything I tried.

Often when go on a bad run we make up some kind of narrative around it. Like, "I only lost because he drew three Thassa's Rebuff in the top fifteen cards. Um, who even plays Thassa's Rebuff anyway?" or "Why do I always draw all of my scry lands after I hit Staff? Where are the damn basics? I am so unlucky!"

All of that is just narrative. No one cares how you won or lost, or if you thought you deserved to win or lose; they pretty much just look to see if there is a "W" or an "L" on the results slip.

Am I just not going to play?

Getting out there (and back) is going to be annoying anyway...

Enter Tomoharu Saito['s Deck #12]. If you've been paying attention to this column (or Twitter) (or Gerry Thompson) you probably know that Tomoharu Saito has been powering out a ton of new deck lists and deck ideas; this one has turned out pretty awesome for me so far...

I had to make my own sideboard; here goes:

Harness by Force at RR might be too greedy; and it's possible Skylasher is better in a low mana deck like this one than Mistcutter Hydra, but I think the ideas are pretty good.

You basically get to move around and customize your threats on a per-opponent basis, while still preserving the core of the deck's strategy. I don't generally love reactive cards (even in sideboard) but I am pretty sure Sphere of Safety is a thing, and cards like Banishing Light and Deicide help ensure you can keep attacking instead of being stuck with untapped creatures.

If you're not familiar with a deck like this it's fairly straightforward.

Get a guy in play (whichever guy).

It can be Gladecover Scout on turn one; it can be one of the many other Hexproof creatures. Voice of Resurgence doesn't have any particular targeting resistance, but it is soo good against removal it can make for a reasonable setup creature. Mogis's Warhound is pretty unimpressive as a Grizzly Bears, but the fact that it can either be an inflexible Grizzly Bears or the world's worst Unflinching Courage help keep the curve smooth and minimize mulligans. This deck is basically one-third guys, one-third lands, and one-third buff. But Mogis's Warhound can be either a 2/2 for two or a redundant buff spell.

After you have a creature on the battlefield...pants it up!

Obviously your specific actions will be affected by how many cards you have and what matchup you're in, but a lot tends to go right when you start layering buff enchantments onto your hard-to-stop attacker in this strategy. Even the little guys are hard to kill and kill pretty hard when properly outfitted.

Cards like Unflinching Courage make this deck a good racer. Boros Charm wins against all different decks all different ways. In the course of a single matchup you can easily survive an alpha strike by making your men indestructible, double strike for the win, and blast the opponent for four. But as flexible as Boros Charm can be, the deck itself can be a mite one-dimensional. There is no Plan B.

But when your Plan A is good enough…you don't necessarily need a Plan B. 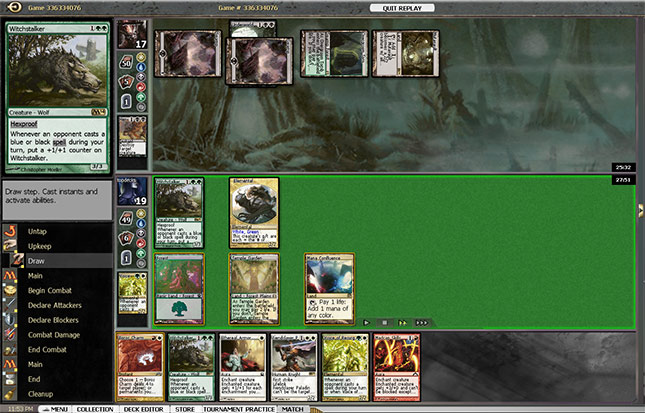 We won game one and therefore are on the draw in game two.

He's down to 17 from our Voice of Resurgence plus one use of Underworld Connections. We've just plucked Madcap Skills and are about to miss our fourth land drop...but we should still be okay!

This turn four gives us many different options. What should we do?

As usual, submit your answer in the comments below.

One responder who agrees with Yours Truly will earn a $25 TCGplayer gift certificate on Friday.

An as-yet unnamed Celebrity Guest will submit his solution then, too. A different lucky responder (who agrees with the Celebrity Guest's play) will also receive a $25 TCGplayer gift certificate.