"You look like the perfect fit"For a girl in need of a tourniquet"But can you save me?"-Aimee Mann

Some jokers over on Top Level Podcast say that Deathmist Raptor might be the best card in Dragons of Tarkir. Huh? What the...?!? It isn't even a Dragon!

But what could they know?

They said the same thing about Tasigur, the Golden Fang way back when.

I love a Gnarled Mass and Deathmist Raptor is a hell of a Gnarled Mass; some would say in the storied line of Constructed playable 3/3 green creatures for three mana -- starting with the mighty Masques Block Staple Silt Crawler to the present day -- Deathmist Raptor is the best of the lot. But can a 3/3 for three mana really be the best card in a set as powerful as Dragons of Tarkir?

"You have to admit it's getting better"-Paul McCartney

There is always a fair bit of speculation about efficient (or at least "pretty efficient") creatures with as much text and potential for card advantage as Deathmist Raptor, but where are you going to put it? The dollar box at every single Local Game Store across these United States is littered with efficient rare creatures that just never found a sixty to live in.

But luckily enough, there is already a shell that can take advantage of Deathmist Raptor's unique blend of "3/3 green creature"-ness and "face down creature"-card advantage-ness:

GW Devotion threatened to go from the loudest popping sit-there deck to ever win a Grand Prix to delegated to the one [tournament win] wonder pile that has plagued any number of comparably meteoric rises.

...but this past weekend has already proven the ongoing potential of the strategy.

(But maybe not from the sector you expected.)

I woke up this morning to some of the best news a Magician can: My good friend Lan D. Ho took down another Preliminary Pro Tour Qualifier! Lan was one of the first folks to qualify for the April 25th round of Regional Pro Tour Qualifiers, and just followed that up with another early bird win. He used -- you guessed it -- GW Devotion with its "perfect fit" Deathmist Raptor.

There are quite a few changes to the specifics of GW Devotion here, despite Lan's unwavering attention to the same core strategy.

Deathmist Raptor takes the place of Fleecemane Lion maindeck - the deck can probably only cotton so many small 3/3 creatures with +1/+1 abilities and long-term upside.

The most unusual inclusion is Ugin, the Spirit Dragon; though we've seen some Ugins in some green-based mana bomb decks in the past, Ugin, the Spirit Dragon hasn't been uber-popular in GW Devotion specifically. The card is somewhat at odds with the concept of dumping your whole deck onto the battlefield (and can even counteract the usually-indestructible defense capabilities of your own Temur Sabertooth)...but Ugin's destructive [-X] nuclear option is mitigated somewhat by the ability to put colorless 2/2 creatures on the battlefield with Mastery of the Unseen and Whisperwood Elemental. You'll have to be careful to be sure, but there can be angles to exploit, even with seemingly symmetrical effects.

I'm super focused on finding my best option for April 25th. Lan's finish is encouraging for me because I think that GW Devotion is already one of the most powerful, redundant strategies you can pick and Deathmist Raptor gives it both early game offense (or defense!) plus a ton of long-game card advantage.

So even though Deathmist Raptor and company aren't ready on Magic Online just yet, I decided to get more reps under my belt this week. The goal being, if I'm going to focus on a deck like GW Devotion, to have lots and lots of practice so that I can play my absolute best on April 25th.

Here are two challenging scenarios from a recent match against a BW Midrange deck:

Because Deathmist Raptor isn't on Magic Online yet, I just used the same Grand Prix-winning version of GW Devotion we used last time, when Brad Nelson was Celebrity Guest.

○ Six lands including a Nykthos, Shrine to Nyx (four open)○ Mastery of the Unseen○ Three creatures including Elvish Mystic, Courser of Kruphix, and a 2/2 face down Forest (all tapped)Bad Guys!

The two Thoughtseizes were used to nab Sylvan Caryatid and Mastery of the Unseen before we could play them; then removed from game via Murderous Cut. Murderous Cut and Hero's Downfall were the collective downfalls of our Polukranos, World Eater and Whisperwood Elemental. 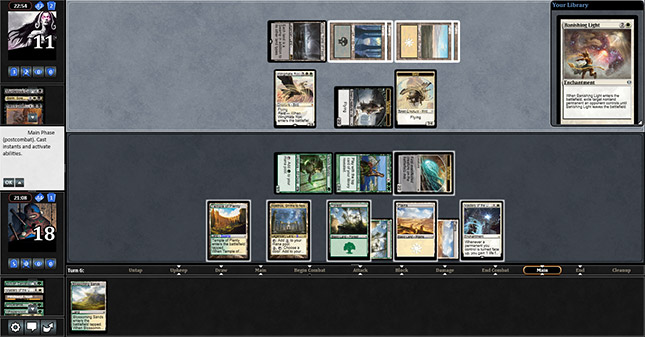 The opponent is passing to the end of his turn. Courser of Kruphix is telling us that Banishing Light is our top card.

What, if anything, do you do before your own next turn?Scenario Two 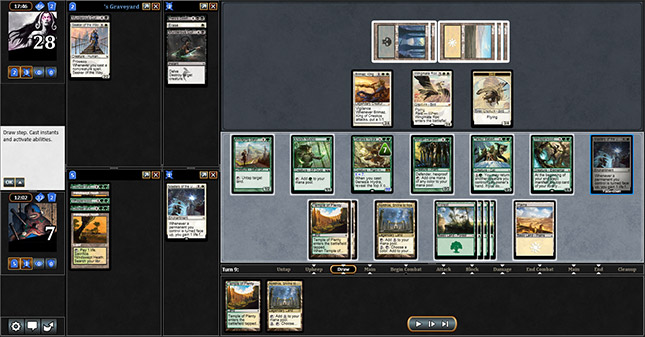 Heroes won game one on the back of a multiple-pronged attack/defense. Card advantage and life points and explosive mana, oh my!

This one we're stabilizing, but behind.

The opponent has eliminated every source of life gain he has seen from us. We have two Coursers in the graveyard and a Mastery of the Unseen removed from game (thanks to Erase).

He's got a huge life advantage and six power in flyers ready to attack next turn.

We've got the ground mucked up, but six in flyers versus seven life...not very good for our long term health. You've gotta figure the bad guys are salivating over the sky.

● One card removed from game:

○ Mastery of the Unseen

Our 7/7 Genesis Hydra has kept Brimaz, King of Oreskos on his best behavior (from our perspective, anyway); Seeker of the Way suicided itself to set up the double 3/4 flyers.

We've just drawn Nykthos, Shrine to Nyx; the opponent is all tapped out.

Knowing what you know, how do you approach this turn?

Welcome back to Make the Play Monday!

If you are just joining us, here's how you play:

I write up a scenario (or multiple scenarios), some simple, some complicated, and ask you the TCGplayer.com community to talk about how you would approach them.

Every opportunity to make a choice in Magic is an opportunity to improve your chances of winning, or in some cases, throw a match away in a single stroke.

Our focus in this column is to maximize the decision making success of all participants.

From a purely self-serving perspective, this has been really helpful to me over the course of the last year, and probably at least some of the reason I have an April 25th to prepare for -- just so you know.

So every week, I ask you all to answer the questions I lay out. Please do so in the comments below!

On Friday, I'll be back and give you my perspective on each scenario. But I won't come alone! Each Friday I bring along a Celebrity Guest to give his perspective as well.

One lucky TCGplayer.com reader who agrees with me will earn a $25 gift certificate (agreeing with me is awesome, after all).

Another lucky TCGplayer.com reader who agrees with my Celebrity Guest will also earn a $25 gift certificate (let's be honest: agreeing with the Celebrity Guest is probably even better).

Play better, chance to win, what are you waiting for?

Make the decision to put your decisions in the comments below now!