I have to say I've come around on Khans of Tarkir's common dual land cycle.

At the first big Standard event with Khans of Tarkir Reid Duke asked me if I thought it would ever be right to play, say, a Wind-Scarred Crag over a Temple of Triumph. Not only could I not think of a deck where I would realistically want to do that, at the time I wasn't sure the common dual land cycle was even playable. After all, coming into play tapped is a big cost, whereas gaining a point of life is a relatively flaccid payoff.

By comparison, think to the pain land cycle; think about Battlefield Forge; for essentially the superpower of coming into play untapped we will gratefully take a point for every colorful tap! This is much, much more of a cost than Wind-Scarred Crag (and company) pay us back...and we'll generally play M15 pain lands over Khans of Tarkir common dual lands in most decks.

Not only have they been pretty good in some decks (gaining a life can be a nice buffer mid-game against aggressive decks) but they just give you nice redundancy in two-color decks. The focus for the most part in Standard has been in three color decks, but two color decks can be awesome too, and these guys really help smooth out your mana.

I wanted to make a deck that could potentially run with Jeskai Tokens, and red and white seemed to have some great tools.

I am a huge fan of the early prowess drops and I think Monastery Swiftspear in particular is underplayed. I mean Taylor Swiftspear is a cross-format All-Star dominating Legacy and weaseling its way into Modern...why not a more prominent resume in Standard?

This RW deck draws inspiration from a number of sources; the flexible strategy echoes Brad Nelson's deck from Pro Tour Khans of Tarkir (where the deck is aggressive to start but can side into Planeswalker control), and the Heliod's Pilgrim package is a nod to Sam Black's deck from the most recent StarCityGames Invitational. For reference, Heliod's Pilgrim mostly goes and gets Chained to the Rocks, but there are times you just want to draw a card...so might as well search up Dragon Mantle, am I right? Incidentally Dragon Mantle can also turn even a Humble 1/2 creature into a one-woman battalion of doom.

One thing you might notice about this deck is the heavily tilted mana base. The maindeck has eighteen white cards and eighteen red cards, but after a bit of testing I determined you want lots and lots of Mountains. Part of that is that you have Taylor Swiftspear to drop on turn one (if possible), but going mid-game you need actual Mountains for Chained to the Rocks. You can use whatever dual land you want for the white half of Chained to the Rocks...but No Mountain, no Chained to the Rocks.

Because of our new best buddy Wind-Scarred Crag we can play ten basic Mountains but still pack fourteen sources of white mana.

2) Scouring Sands - My old Righteous Babe teammate Brian Kowal made Top 8 of a PTQ last weekend with Scouring Sands in his sideboard. I decided I didn't want to be too overly anti-Jeskai Ascendancy...because what do you do with a hand full of Erase when your opponent simply doesn't have Jeskai Ascendancy on the battlefield? Lose to the tokens? I figured having cards for both would be useful. Scouring Sands gives you some blowout games but I also like that it combines well with the prowess creatures.

Everything else here is pretty straightforward. These are for the most part the best red and white cards you can play in Standard...and Heliod's Pilgrim is really emerging as one of the best cards in Standard (for me at least). I liked it so much in this deck I went a little crazy. Tell me you don't love this!

Like I said I basically wanted to see how far I could push Heliod's Pilgrim. It's white; could I put in a deck with a white card on the order of Siege Rhino? The problem was that as good as Heliod's Pilgrim can be in Boros colors, without Mountains...not so much. (See the 10 Mountains in the previous deck!)

This deck might make for Nylea's Presence's coming-out party in Standard. Appying it to lands like Evolving Wilds or Windswept Heath in the mid-game makes for some mighty Magic. I needed some low cost ways to up the Mountains count for Chained to the Rocks; and Nylea's Presence can act the same way as Dragon Mantle in the RW deck. Plus, it's another enchantment for the constellation cards.

You haven't lived until you've won a game with a basic Forest enchanted with four or so Chained to the Rocks.

Anyway, back to the Boros!

As with every week, we pose a situation or three and ask the TCGplayer community to weigh in.

The goal with this article series is to help all readers (and one writer!) to make better plays. So I'll pose a couple of scenarios and ask you to respond in the comments below. We'll revisit the scenarios on Friday, where I give my solutions as well as bringing in a Celebrity Guest.

One lucky TCGplayer.com reader who makes the play I did will win a $25 gift certificate!

Another lucky reader who makes the same play as the Celebrity Guest will also win a $25 gift certificate!

It's game two against a Boss Sligh opponent.

We won game one with a series of big plays. Multiple Prowess activations on both weenies; multiple Lightning Strikes on multiple Firedrinker Satyrs; a string of Chained to the Rocks two-for-ones.

We started off on six. The opponent on the other hand kept a one land hand. 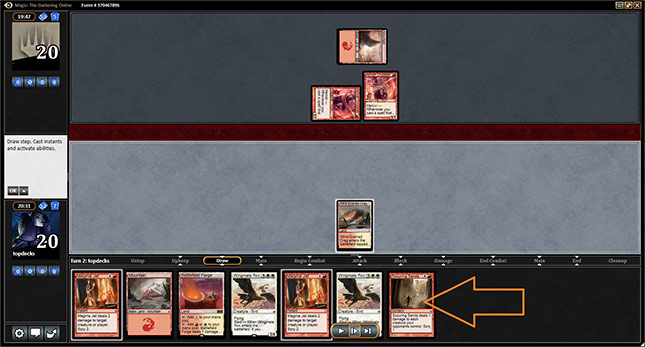 ...we ripped our Scouring Sands

Though our six-card hand could defend itself (and was good on Scry), it was not particularly fast on offense. Those two Wingmate Rocs? We drew no more creatures for the first several turns.

But then turn five rolled around: 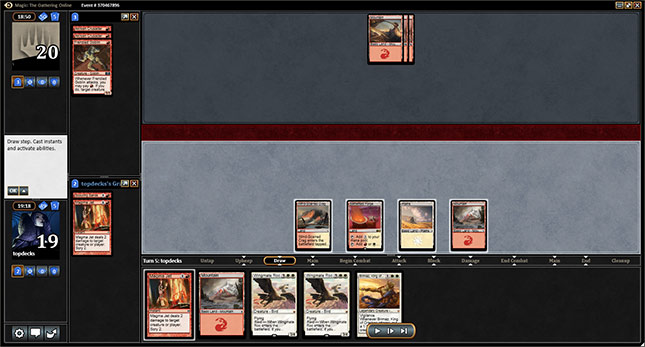 The opponent hasn't issued any more creatures after a Frenzied Goblin we killed with a Magma Jet after it got in for one.

We were fully expecting to start on an un-Raided Wingmate Roc to hopefully set up the second Wingmate Roc...but then we pulled Brimaz, King of Oreskos.

How do you play turn five?

See you back here on Friday...and Merry Christmas!