A couple of weeks ago my Top 8 Magic podcast partner Brian David-Marshall dropped a Tweet that picked up a crazy number of favorites (147) and retweets (44).

That Tweet unveiled a brand new deck by one of Magic's legendary champions...cleaning up the side event tables. Would it legitimately transform (or at least impact) the format? [Jury's still out.] Cause us all to re-think a seemingly static Standard? [Probably.] Is that You Make the Card fan favorite Waste Not? [Why, yes!]

Just got Antonio De Rosa's Waste Not list that crushed a Standard side event at #GPMemphis pic.twitter.com/F7w3bOE63t

Brian was super excited about the deck and called me up immediately upon returning from the Grand Prix. Something different and something quite powerful, Antonino's deck was definitely something I should look at for my upcoming Regional Pro Tour Qualifier.

This is the version (and proxy sideboard) that I tested with:

If you haven't figured it out yet, this deck has a couple of things going on; including one absolutely smashing pocket combo.The Return of Rakshasa's Secret

A few weeks ago Gerard Fabiano (Antonino's longtime partner in crime) busted open the first Fate Reforged-legal Standard event with a couple of copies of Rakshasa's Secret in his Sultai Control deck. Rakshasa's Secret is not the kind of card that is intuitively good to all players in 2015.

It is somewhat similar at "two cards for three mana" that we have seen in a number of successful cards in times past.

While Blightning this is not, Rakshasa's Secret doesn't have quite the job of killing Jace, the Mind Sculptor that Blightning was largely tasked with in its Standard format. Milling two cards from the top of your own library is like stockpiling two future mana in Delve decks.

When the metagame at large started adapting Gerard's list for themselves, his two-of Rakshasa's Secret was one of the first cards to get optimized out; but Antonino went the opposite direction. Instead of going down from two, Ant went up to all four copies! And main deck!

(More on this in a second.)The Dark Deal Mondo Combo

Antonino's deck is the elusive mystery wrapped in an enigma squeezed into a skirt that's just a little too tight.

The centerpiece of this deck appears to be Waste Not. You Lay Waste Not on the second turn and then follow up with either Rakshasa's Secret or -- ooh boy -- Dark Deal and let the Magic happen.

It is not uncommon to just go Waste Not-into-Thoughtseize, take the opponent's best card and either draw a card or make a creature. That feels pretty spectacular if you haven't tried it yet, by the way.

But the really powerful bulk effects involve the opponent discarding lands. If you "just" get the opponent to discard two lands with your post-Waste Not / third turn Rakshasa's Secret that is ostensibly the least exciting thing you can do… But you now have BBBB and some graveyard fodder to, say, lay a fast Gurmag Angler or Tasigur, the Golden Fang.

But the super insane mondo combo that this deck is capable of -- the thing that really puts those Johnny butts in seats -- is Waste Not into Dark Deal.

When you Dark Deal with Waste Not on the battlefield, both players discard their hands, and then very Windfall-like (remember Windfall got banned one second after its debut Pro Tour) puts a bazillion triggers on Dark Deal. What ends up happening most often is that you get a bunch of BB triggers based on the number of lands the opponent used to have in hand, a couple of 2/2 creatures, and draw some cards.

...and of course you draw cards from your own Dark Deal refill!

It's tons and tons of velocity in a tidy two-card package.

You don't win the game outright or anything, but in terms of what is available to do in Standard? There isn't a lot that you can accomplish so quickly, or so blood-pumpingly, as Waste Not into Dark Deal on the third turn.

(Interesting point on that, in a moment.)

In addition to trying the deck out for my own use, I tapped my old buddy Antonino to get his take on, you know, his deck.

"The deck is super polarizing since it has insane matchups...and super bad ones.

"The deck is awesome v. Boros, Abzan, Jeskai, and Sultai. It can't ever win v. Monored, Heroic, or UB Control, so it's a terrible deck to play on MTGO in my opinion.

"THIS IS NOT A Waste Not DECK for whatever it's worth. It's a Delve deck! Against many decks you take out your Waste Not package.

"Other cards I tried in this deck but were not good enough:

"Now that Boros has four Outpost Siege it is probably a bad matchup but I haven't tested against that yet; only the older versions of Boros (which as I said was awesome)."

Learning Ant's take on the deck made game play a bit different than I originally assumed. Dark Deal acts like a somewhat disruptive Dark Ritual that you can access some time in the future more than a Windfall pocket combo. Rakshasa's Secret has a lot of the text that made Stupor, Unburden, and even Mind Rot playable in formats past, plus makes the down payment on your Gurmag Angler sometime later.

One thing is definitely the case however you play this deck though.

This isn't necessarily a deck that you want to take into the wide open fistfight of macro metagame, but if you can largely pick your enemies? Easy matchup after easy matchup. For what it's worth, though (and this is coming from a UB Control player as you know), I thought it was pretty hard to lose v. UB Control once I had a Waste Not down.

So given all that preamble (for those who might or might not have been familiar with this explosive new deck), it's time to get to our Make the Play Monday scenarios!

As longtime readers know, this is Make the Play Monday.

The concept is simple:

So let's get to the situations!Scenario One 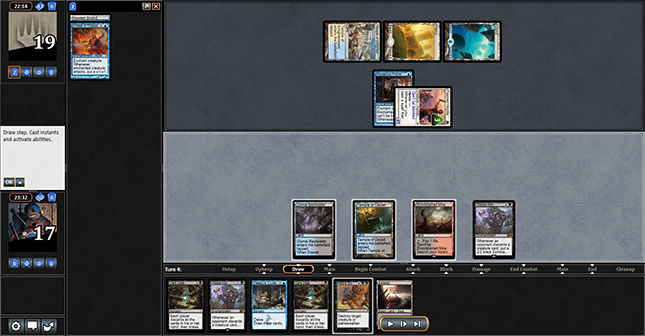 Now here's an overlap of a bunch of things that we've talked about!

The opponent? UW Heroic (or at least he looks like UW Heroic with all blue and white lands tapped; a Favored Hoplite smashing us with three counters on it; enchanted with Aqueous Form).

Or, according to Ant, one of the bad matchups.

But all is not lost for the good guys! (Or are we the bad guys?)

On the previous turn we played Waste Not.

We're untapping with three and have just ripped a Swamp.

Like I said, on draw step we picked up a Swamp.

Make the Play: Make whatever sequence you would Foresee for your pre-combat main phase.Scenario Two

This is our hand:

We know from a turn one Thoughtseize that the opponent has another Mardu Scout and a Wild Slash (the Mountain and the Monastery Swiftspear being in play now).

Per usual, drop your answers in the comments below.

I'll revisit these scenarios on Friday with a Celebrity Guest in tow.