Pack Rat is one of the most polarizing cards to have seen print in recent years. Previously it was just the dumbest Limited card maybe ever, though it initially had no luck making the break in Constructed (even though Reanimator was arguably the leading strategy at the time in Standard).

But, no more of that!

Pack Rat slowly inched its way from a two-of in Kentarou Yamamoto's Top 8 deck from Pro Tour Theros to a whiz bang four-of Staple in Monoblack Devotion, its blue, green, and white splash cousins, and even some duty in blue control decks. No single card is responsible for more "Oops, I won" games in Standard than Pack Rat but that is not to say that Pack Rat doesn't nevertheless give players chances for tight individual plays.

Playing with and against Pack Rat is still giving rise to emerging paradigms. When should a black mage go all-in on Pack Rat? How can we trick the opposing black mage into a war of attrition? What is the balance between threats, removal, and dodging the opponent's sweepers?

Depending on the texture of an individual game, Pack Rat can play like entire rainbow of Magic: The Gathering mechanics. It can be a one-card combo deck; pose interesting questions with every stack / opportunity; synergize with breakers like Underworld Connections; and even smooth out otherwise uneven or even atrocious draws. Kind of like morph or cycling.

For this week's Make the Play Monday we are going to examine a couple of Pack Rat-centric scenarios.

This is our deck:

We got our butts handed to us in game one.

At least we know what the opponent is on; it looks like a red-based devotion deck. Prior to blowing our Bile Blight we Thoughtseized a couple of copies of Fanatic of Mogis (which are doubly dangerous thanks to Legion's Initiative).

At least I wasn't stuck on two!

We led on Pack Rat.

He answered with an attacking Ash Zealot.

We swung for one; he played a second Ash Zealot, challenging us to have a Bile Blight (which we didn't have).

We have three mana open and a ton of options. 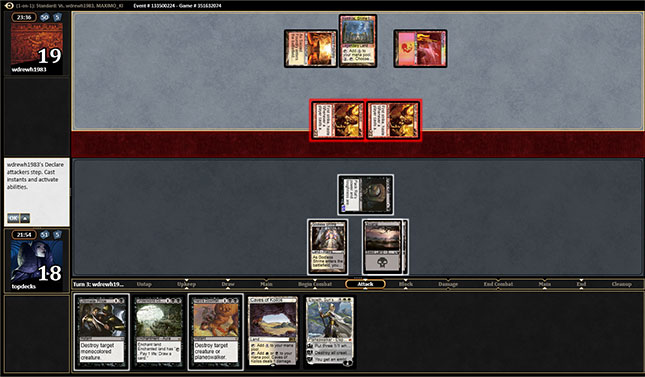 Opponent's Cards in Hand: 5 [all unknown]

Scenario One: What's the play, right here and now?Scenario Two:

We got out of game two! YUS!

(So we must have been able to do something right).

In game three we find ourselves with yet another possible Pack Rat problem.

This position is quite a bit more developed than Scenario One. He's got his Legion's Initiative and is swinging with three other permanents. 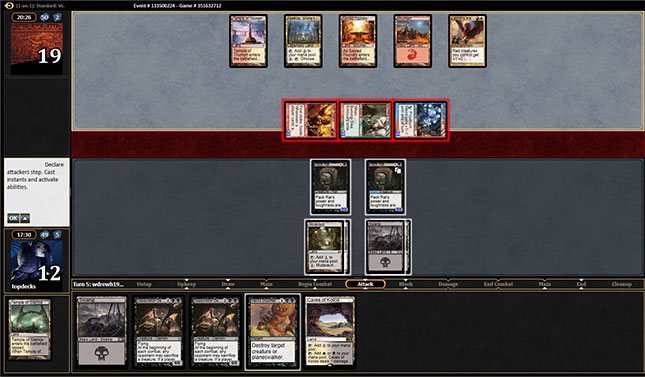 He is on 19 life and has two other cards in hand.

As usual, write your answers in the comments below!

As ever, this is Make the Play Monday. Working under the theory that successful games of Magic are basically plays laced into plays. The objective of this column is to highlight individual plays, share, and discuss for purpose of improvement.

We don't just pose questions; on Friday, I will reveal the plays I made...and loop in a Celebrity Guest to do the same. Want to know if you can play like a Pro? You can find out Friday!

One lucky reader whose stated plays match mine will earn a $25 TCGplayer.com gift certificate.

One additional reader whose plays match the Celebrity Guest's will also earn a $25 TCGplayer.com certificate.