I recently rolled back to trying one of the "when Journey into Nyx came out" Saito decks that was an early tournament performer -- URW Control:

● Firemind's Foresight, though just a "fun-of" singleton, gives the deck a very different structure than more conventional UW or Esper decks. Many of the other card choices in the deck -- one Quicken, a Turn // Burn, a maindeck Deicide, even the pair of Syncopates -- are set to take advantage of this big seven.● I once leveled Jace, Architect of Thought all the way through his ultimate just to get my own Keranos, God of Storms. Keranos can be a route to victory, but with all the Temples in this deck -- and there are all twelve on-color Temples here -- you can set yourself up for a "personal Howling Mine" pretty easily. I am not actually that sold on Keranos (it sucks to invest a bunch of mana only to draw an Essence Scatter), but it has been an interesting new card to try. Among other things, Keranos has played decent Ajani defense.● I took the version of the sideboard from the Top 4 of the Cincinnati Open (Saito didn't actually provide one). Though this version only has one copy of Assemble the Legion, the fact that it is in a blue deck is pretty awesome. How many of you have sided in multiple copies of Assemble the Legion against Black decks and still gotten raced by lucky streak of Grey Merchants of Asphodel? Well, this deck can Dissolve those! #insurance

So this week's Make the Play Monday is all about decisions with this U/R/W deck, taken from some games I played with it.

Per usual, submit your answers in the comments below. One answer that agrees with YT, and one that agrees with our as-yet-unrevealed Celebrity Guest will each receive $25 TCGplayer gift certificates.

So get going on these three questions:

1. You're going first with a keepable-but-unremarkable hand; you do not know your opponent's archetype. Play your first turn. 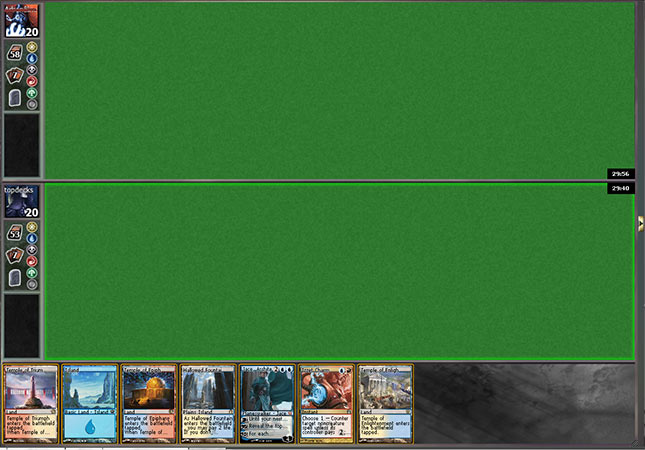 2. You've gone pretty deep against a Bant creature deck; at least nine turns in by the looks of it (which is not uncommon for this kind of deck).

You're probably going to win this game, eventually; but for now you have to figure out what to do before you finish passing your turn. You have eight cards in hand. Which do you discard among the following: 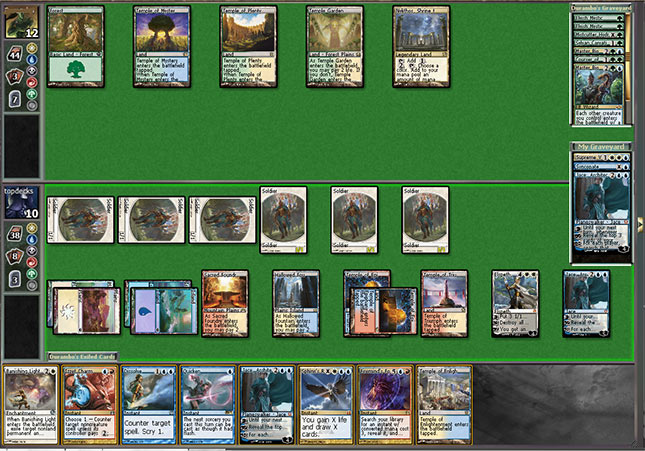 3. You've gone long against a Naya Ramp deck. The opponent has two copies of Courser of Kruphix removed from game thanks to Syncopate and Last Breath; and a bunch of creatures in his bin from assorted other trades.

He has two cards in hand that you know -- from Ajani, Mentor of Heroes -- are Xenagos, the Reveler and Elspeth, Sun's Champion. He has Ajani with six loyalty and has been managing your Elspeth + her tokens with Chandra, Pyromaster.

You have two tokens left facing off against a Sylvan Caryatid and a surprisingly annoying Keening Apparition.

You have seven lands untapped that you plan to use to cast Firemind's Foresight (and an eighth tapped). Your other two cards are Sphinx's Revelation and Detention Sphere (I told you the Keening Apparition was surprisingly annoying).

What do you get with Firemind's Foresight? Note: Per your graveyard (and his Courser of Kruphix), the Last Breath has already been spoken for!

The questions in summary:

1. Play your first turn.2. Which do you discard?3. What do you get with Firemind's Foresight?

Prizes (and solutions) on Friday!