One of the central notions of Make the Play Monday and Flores Rewards Friday is that Magic is a game of decisions-made, and that making more, good, decisions increases our chances to win over time.

When you play a Farseek (or Rampant Growth, or I guess Into the North or some other equivalent) deck it is awesome to draw that Farseek in your opening hand. It is almost like you are playing a different deck when you have your two-mana mana-finder (versus when you don't) on the second turn. It sure is great to cast, isn't it? You get to have four-on-three instead of three-on-three like some peon.

Have you ever gotten the wrong land?

I think that you'd be surprised at the number of games not-won by drawing a Farseek. It's certainly not on the order of the number of games won by overpowering the opponent with that second turn mana advantage, but the disconnect between "getting exactly the card you wanted" and "throwing away the opportunity" is still there. You lazily get your Stomping Ground only to realize you now can't cast the Vampire Nighthawk in your hand. Or you know you are supposed to get the second black -- and even ensure future red by finding Blood Crypt -- without looking far enough into the future to realize you actually need a third green on turn four. It happens!

So this week I want to focus on how to play when everything is coming up Piznarski.

How much practice do you have in making decisions once you've gotten what you wanted to get?

We think of landing the eight for a Dig Through Time as an end in-and-of itself.

Or we get our Dragonlord Ojutai through The Red Zone, declare the game as being toggled onto "Easy Mode" and assume our 5/4 is going to win the game for us by itself.

Every time we touch our library, we have the opportunity to gain or lose value; or at the very least gain more or less value, depending (if you draw an extra Shock, that's probably better than not drawing an extra Shock, but it probably would have been better to choose the Lightning Bolt, given the option).

The stock Esper Dragons deck is essentially a UB Control deck splashing white only for Dragonlord Ojutai; Reid's deck moves to cut out the middleman. It trades in black spot removal for the somewhat less flexible (but still pretty good) white spot removal and Thoughtseize for Elspeth, Sun's Champion.

Last Breath was one of the most important removal cards in Standard last year because it could slow down Pack Rat or trade up on Nightveil Specter; it has lost quite a bit of popularity but is still serviceable, especially if you care about speed against a faster opponent more than playing universally embraced cards.

Elspeth, Sun's Champion is perhaps the most important top end card in Standard (again). Elspeth started out near the top, dueled with Doomwake Giant for a while, flitted in and around the top, got thoroughly out-classed by Ugin, the Spirit Dragon (and Garruk, Apex Predator), and somehow has come around to being the top of the hop again. The UW deck can play multiple unique end games. Elspeth, Sun's Champion is great at holding the fort and is probably the most powerful card, overall, at any given table. It can even destroy Dragonlord Ojutai while gaining an advantage!

Reid's deck was overall pretty fun to play, but I think it is a little thin on sweepers.

I thought Perilous Vault was one of the most impressive cards in Reid's seventy-five, and went out of my way to dig [you know "Through Time"] for it. And even though this deck has Dragonlord Ojutai (i.e. a card you want to keep around) and Elspeth, Sun's Champion (i.e. a card that can do Wrath duty for you) I often wanted End Hostilities more than it actually came up.

But for our especial purposes today, Reid's deck has lots of opportunities to touch your library to draw cards, search for cards, and gain -- or lose -- value.

A simple Anticipate can be a skill tester. Sometimes, when you set up with Temple of Enlightenment (itself allowing you to touch your library) you learn you aren't supposed to cast the Anticipate at all!

Sometimes your library stares back at you!

It might be a bit early to call the game on turn two, but believe you me, only one of the three or more possible options is going to maximize your chances of winning the game.

This week we're going to focus on the bigger, flashier, ways that Reid's strategy can let you touch your library: Dig Through Time and Dragonlord Ojutai.

Scenario One: Dig Through Time 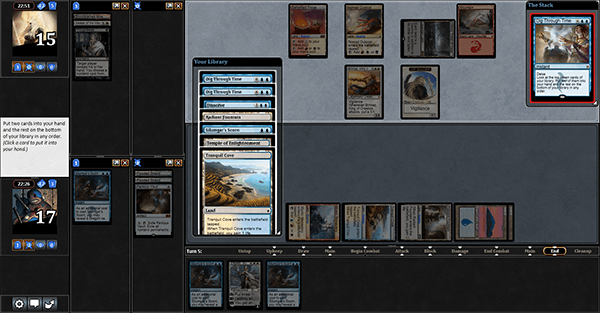 It's the opponent's fifth turn.

We traded Silumgar's Scorn for Seeker of the Way early, but lost Perilous Vault to Thoughtseize.

He landed Brimaz, King of Oreskos; now it's time for us to go with our big spell.

Our Dig Through Time is on the stack.

It is showing us:

Scenario One asks: Which two cards do you take, and why? 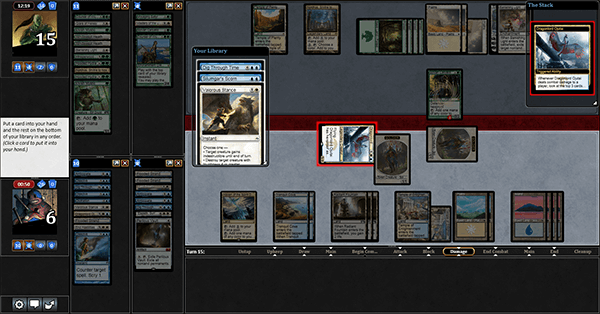 We are super deep in Game Three with GW Devotion.

We split the first two; the first game went to Dragonlord Ojutai and the second to Mastery of the Unseen.

In this one, our opponent had the fast Mastery of the Unseen with a little help, but we were able to answer with Perilous Vault.

Now we're both in topdeck mode, but one of us has Dragonlord Ojutai going!

Scenario Two asks: Which spell do you take, and why?

Like we said up top (and quite often in this column) we believe that Magic is a game of decisions; better decisions make for better long-term prospects in terms of winning; and examining common (or at least replicable) scenarios can help players make these kinds of decisions with greater skill and confidence come actual tournament time.

And let's think about it -- You're going to have to pick two cards for Dig Through Time and one-in-three from Dragonlord Ojutai every single time you play a deck like this (or Esper Dragons)... Tightening up which cards you'd take when at least some things are going your way can go a long way in beefing up your win percentage!

So submit your answers to Scenario One and Scenario Two in the comments below.

In addition to exercising a little gray matter, you will be eligible for exciting prizes!

As with every week, I will come back on Flores Rewards Friday to discuss each play, and what I think the right play is. I will be joined by a surprise Celebrity Guest who will add his skill / experience / genius to the discussion as well.

Comments below: What would you take (and why)?