For today's Make the Play Monday we will pay a visit to Ivan Floch's UW Control deck, the winner of Pro Tour Magic 2015.

This deck is the latest in the long line that started with The Deck way back in the mid-1990s.

Arguably the most extreme version of UW in some time, Floch's deck eschews even the solo copies of Elspeth, Sun's Champion and AEtherling that kill, instead relying on Jace, Architect of Thought (essentially a defensive card advantage machine) and Elixir of Immortality (essentially an improved Feldon's Cane) as his ultimate threat cards.

This deck is instead all about permission, life gain, removal, and card drawing. It is about reaction and survival...survival to keep playing lands turn after turn after turn.

A bear to playtest against, Floch's UW gives the opponent few real avenues for satisfaction. When it's working it really makes an opponent look like he is playing a different format.

Heroes are on the play.

We open on Temple of Epiphany.

The opponent plays Island and passes.

Largely based on the Syncopate in our opener, we go with Mutavault on the second turn. There are lots of different lands we can play on the second turn, but longtime readers must by now know how much I love playing a Mutavault (especially early on)...here and here for instance.

Plus, what read does Temple of Epiphany + Mutavault give the opponent exactly?

So the opponent plays a second Island and runs out Frostburn Weird.

Well...this is the play we were waiting for; i.e. anything. We trade Syncopate for Frostburn Weird and go to our third turn with a naked board on the other side.

So this is what we've got:

Our six specifically are: 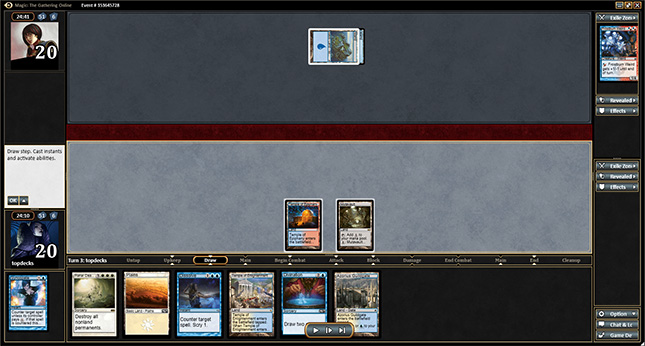 In theory we are in a perfectly balanced situation. All even.

But in practice, the opponent at least at this point seems to be a Monoblue Devotion deck. One of the premier aggressive blue decks in the history of Magic: The Gathering. This is a deck that wants to get its beat on, and early.

Meanwhile we are the 2014 incarnation of the Weissman Fortress. The longer the game goes, the better for us. We have answers to every situation in Dissolve and other permission; and answers to almost every kind of permanent in Planar Cleansing on top of Supreme Verdict (and conveniently we have Planar Cleansing in hand).

The previous turn we played according to a plan and got paid for it already.

Now we have to develop a new plan, and that is going to start with what land we play.

Challenge of the Week: Play your turn three.

If you're joining us for the first time, here's how Make the Play Monday works:

Given the idea that Magic is a game that laces play decisions into play decisions, we choose one (or more) and figure out the best way to approach it. Ideally, the end result is to improve all of our abilities to approach these plays in real-game situations.

This week's special...? Guess the Celebrity Guest! One third reader (who gets this right) will also earn a $25 TCGplayer.com Gift Certificate.

1. "Play your turn three," and2. Guess the Celebrity Guest

See you back here Friday.