You might remember Marauding Captain as that one three-star that your "friend" played three of in an attempt to create an "unbreakable shield" for his monsters. Remember that? And then you played Dark Hole because it wasn't banned, and your friend screamed and quit the game because you foiled his "perfect plan"...

No? Just me? Alright then…

In all seriousness, you've probably seen this guy before, even if you've somehow never set eyes on the card called "Marauding Captain". He's been featured in over 20 pieces of card art at this point, and just like we saw with the Six Samurai, if you use the artwork to follow his adventures, his service record is...impressive. 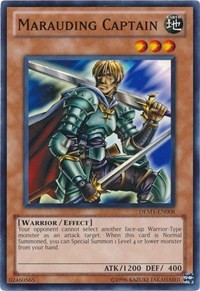 It's important to note that, unlike Six Sams (who have a story in the Master Guide volumes), Marauding Captain gives us nothing to go off of outside of his actual card appearances. I believe I've mapped out the story, but let me know if you have other thoughts!

What's undeniable is that the Captain's gone into battle alongside Freed the Matchless General and Giga Gagagigo; served under the Tyrant's Temper, and has crossed swords with the likes of Inpachi, Goblin Attack Force, and Terrorking Archfiend. He's led armies into battle, put his life on the line to save friends, and survived near death experiences. So this is the unlikely story of Marauding Captain.

Marauding Captain served in the army of the Tyrant Emperor, the same guy you can see in The Emperor's Holiday, under the command of Freed the Matchless General. His role was largely to serve as Freed's aide, including being his cook (which is how we got Marmiting Captain). 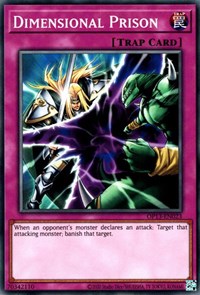 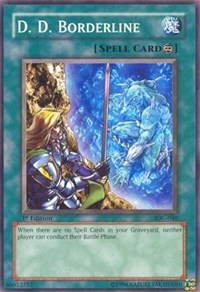 During this time, a monster known as Gagagigo ended up engaging Freed in single combat, but Freed was victorious, sending Gagagigo to the Different Dimension with his Dimensional Prison. (Bear with me, this is relevant.) As Gagagigo stared out at Freed through the D.D. Borderline, he swore he'd get revenge. This desire for payback would set him down a dark path, but for now, let's return to Marauding Captain. 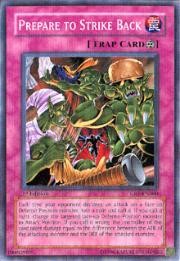 The army of the Tyrant Emperor was engaged in battle against the armies from the realm of darkness, under the command of Reign-Beaux, Overlord of Dark World. Marauding Captain participated in numerous engagements, but his most iconic battle was the Assault On GHQ, in which he caught the Goblin Attack Force unaware. You can see it start to go down in Prepare to Strike Back.

Finally, the army was able to challenge Reign-Beaux. Together with Freed and Sasuke Samurai, Marauding Captain bravely engaged the foe. "Which card is that depicted on?" Well...that's complicated. 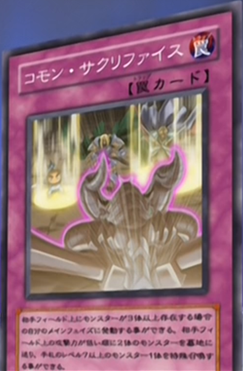 Rest assured that there is artwork for it, it's just not on a card that exists in the game: it's on a card that only appeared inYu-Gi-Oh! GX, called Common Sacrifice. We never see a card depicting the outcome of that clash, though we can speculate on the result of the battle based on the card Tyrant's Temper: the heroes were defeated, and Marauding Captain was blamed for the failure.

Either of his own volition or under the Emperor's decree, Marauding Captain was banished from the army and the kingdom. He set off on his own to engage with enemy champions and hopefully earn his way back into the Emperor's service. 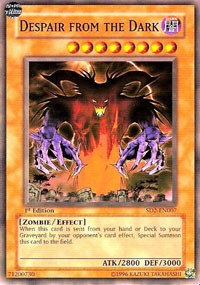 Venturing forth into the realm of monsters, the wayward captain first encountered Despair from the Dark, which can be seen in Staunch Defender. He assumedly defeated the enemy, based on the fact that he's... you know... not dead… and continued on his journey, though it's unknown if Despair from the Dark was killed in the battle or if it was simply defeated. 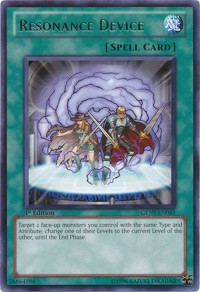 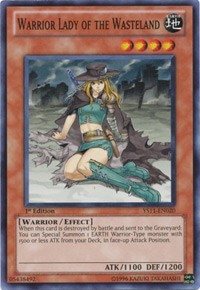 The Captain's destination seems unclear, but he did take it upon himself to defeat as many monsters as possible along the way, while aiding those humans who were wandering the realm of monsters. In the artwork for Resonance Device, you can see him helping Warrior Lady of the Wasteland. 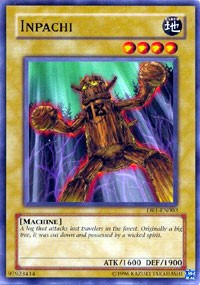 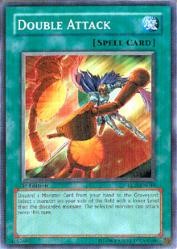 Marauding Captain journey then took him into a deep forest, where he was set upon by the guardian of those woods: Inpachi. The fighting was fierce - the Captain's cape even got torn up! - but in the end, Marauding Captain defeated Inpachi with a Double Attack, slicing the wooden monster into three pieces. But the wood spirit wasn't vanquished however, and it had time to brood on this defeat (and the man who inflicted it). 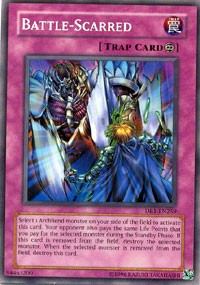 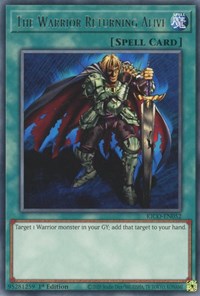 Eventually, Marauding Captain came across Terrorking Archfiend, and attempted to end his reign once and for all. However, the conflict didn't go as planned, and Terrorking Archfiend was able to not only severely wound the Captain but also destroy one of his swords, which is visible in Battle-Scarred.

This particular event is important in establishing the timeline of Marauding Captain, because this is where the Captain receives his iconic scar over his right eye, and for a time, he's depicted with only one sword. The damage he's endured up to this point can be seen most clearly in The Warrior Returning Alive. The Captain escaped and lived to fight another day, but this was a defeat he wouldn't soon forget.

Despite having barely escaped with his life, Marauding Captain remained committed to his mission of defeating the foes of humanity. 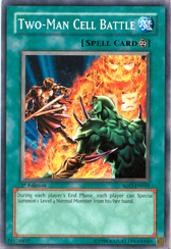 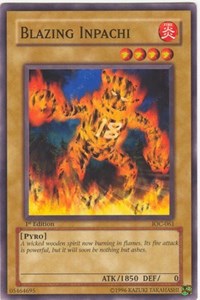 The Captain staggered his way to the lands of the Invader of Darkness. In his weakened state, he was captured by the monsters who served under the Invader. He was allowed to heal and was armed with a second sword to replace the one he lost to Terrorking Archfiend. Then, he was tossed into a Two-Man Cell Battle with an unlikely foe and an even more unlikely ally: Blazing Inpachi and Gagagigo, respectively. 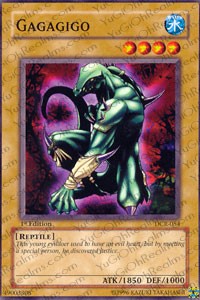 My Body As A Shield

Blazing Inpachi still remembered the damage inflicted upon it by the Captain, and attacked viciously. Gagagigo proved to be a powerful ally, and the Captain came to respect him over the course of the battle, to the point where he even shielded the monster from an attack that would have caused massive damage as seen in My Body As A Shield. 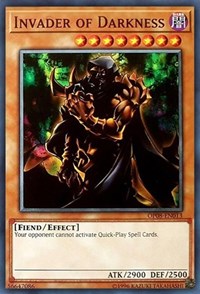 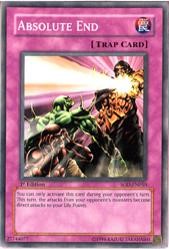 Impressed, and in the Captain's debt, Gagagigo joined the attack against Invader of Darkness. After gathering their force of exiles (an "Exiled Force", if you will), the attack began. It was Gagagigo, and some other hapless human...we'll call him Greg… who ultimately reached Invader of Darkness and engaged him in combat. Unfortunately for Gagagigo (and Greg, I guess), Invader of Darkness proved to be too much to handle. He unleashed a devastating beam attack, and, as seen in Absolute End, where you can see Gagagigo selflessly throw himself in front of Greg to take the blast, mirroring the action Marauding Captain had taken in My Body As A Shield. 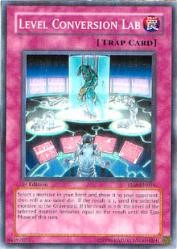 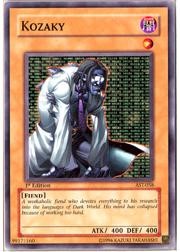 The combined forces were able to defeat Invader of Darkness, but at a cost: Gagagigo was horribly injured. The mad scientist Kozaky took the wounded Gagagigo back to his lab, as per Level Conversion Lab. What happened there...well, that's a story for another time.

There and Back Again

With his foe defeated, Marauding Captain and his remaining men traveled back from the Different Dimension to the service of Freed, likely appearing from nowhere in the middle of a major battle, perhaps as in Reinforcement of the Army. 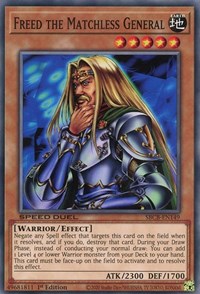 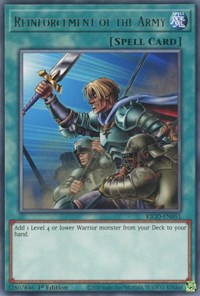 "How did they get back?" I can hear you asking. That's an excellent question! So anyway, Marauding Captain is back with Freed. For a time, go are back to how they were before: Freed leading his men, with Marauding Captain as his right hand. 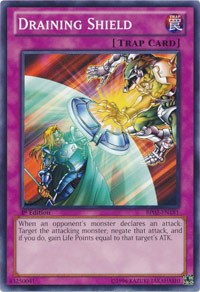 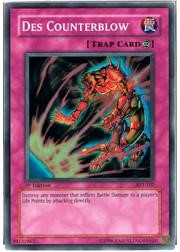 Unfortunately that wouldn't last long; an old foe returned from the Different Dimension to gain vengeance against Freed. That's right: freaking Gagagigo came back, but this time he as Giga Gagagigo! Freed wasted no time in engaging the foe, but thanks to skills like Draining Shield, Freed once again bested Gigagagigo; you can see it in Des Counterblow. 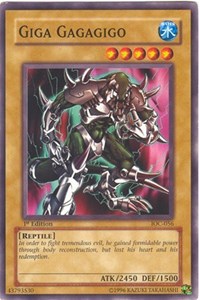 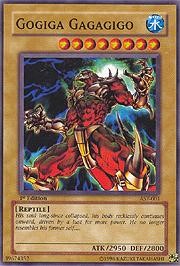 Marauding Captain didn't witness this battle, but he would be present when Giga Gagagigo returned to challenge Freed again, this time as… wait for it… Gogiga Gagagigo! (Please let that be the last permutation of this name I have to write for this article). And that battle FINALLY saw our favorite reptile...cyborg...thing defeat his foe. 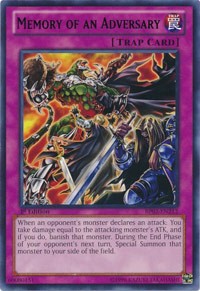 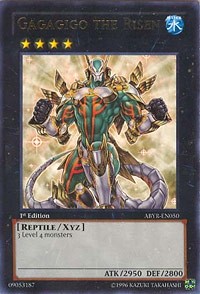 Gagagigo was prepared to strike the final blow when Marauding Captain stepped between the combatants and pleaded with his one-time ally to stop this madness, shown in Memory of an Adversary. Marauding Captain's selfless act reminded Gagagigo of who he used to be, purging him of his evil intentions, resulting in Gagagigo becoming Gagagigo the Risen.

And that...is all we have so far! Does this account for EVERY card Marauding Captain appears in? No. However a lot of the cards that I didn't recount here don't really drive the story. Motivating Captain is just him yelling at people? It probably fits somewhere in the first paragraph of his early career.

In my mind, the primary deciding factor on how the timeline flows is based on Battle-Scarred. There are a few, VERY few cards that depict the Captain with only one sword. To me, those must have been after Battle-Scarred took place. He definitely gets another sword at some point, but he keeps the scar on his eye.

Do you think the story flows a different way? Let me know, and I'll see you all for the next lore dump!