It's been one week since the release of Blazing Vortex.

Last Friday we looked at the biggest cards from Blazing Vortex presales, but this time we're looking at Yu-Gi-Oh's biggest movers and shakers across entire TCGplayer Marketplace. And as expected, BLVO's dominating sales. What we didn't expect, were some of the specific cards that saw big spikes.

Nobody expected the Armed Dragon Thunder deck to be seriously competitive, and early hype was pretty light. But the theme proved to be a big winner in presales, and demand exploded once the set reached full release on Friday. More on that in a bit.

Meanwhile the next Remote Duel Invitational kicks off tomorrow, featuring qualified competitors like TCGplayer's own Hanko Chow, and the world is waiting to find out which new cards could make a tournament impact. New picks like Pot of Prosperity, Underworld Goddess of the Closed World, and Heavenly Zephyr - Miradora have seen lots of action over the past two and a half weeks, and holdouts will have their fingers on the Add To Cart Button all weekend long.

In fact, one of those cards is kicking off our Top 10 countdown today. With no further ado, these were the best-selling cards by unique purchase on TCGplayer this week.

#10 Underworld Goddess of the Closed World 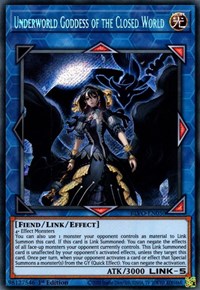 After becoming the Number 1 best-selling card in the Marketplace during presales, Underworld Goddess of the Closed World fell below $30 on launch day and has yet to bounce back. Supply has surged to meet the big demand, and at this point anyone who didn't buy in early on the TCG's first Link 5 is probably waiting to see how it fares this weekend, at the Remote Duel Invitational.

If Underworld Goddess of the Closed World puts in work, expect to see demand surge and the price to head back to somewhere in the $35 to $45 range. It could go even higher. The one thing that's for sure is that the wait-and-see types are going to be on a hair trigger all Saturday long. 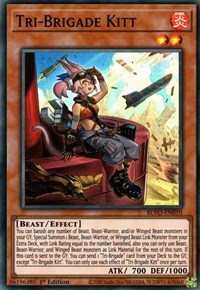 Down from Number 3 last week, Tri-Brigade Kitt reached a high of $4 in presales, slowly declined to about $2.50, and then plunged to 85 cents on release day. Anybody who bought in then - and there were a ton of people buying playsets - came out the other side feeling pretty good, as Tri-Brigade Kitt now back to $2 and still climbing as of today.

Will Tri-Brigades become a tournament-viable deck? Probably not. But is $2 a plausible price for a new card with a likeable character, from a fan-favorite underdog theme? Totally. That price may deter more casual Tri-Brigade fans, but Tri-Brigade Kitt could easily stay solid at this price point. We saw the average sales numbers per purchase go from speculative in presales and launch day, numbers that were more reflective of real players in the following days; there were more buyers purchasing playsets, instead of loading up on 6 or more copies. So there seems to be real fan demand here. 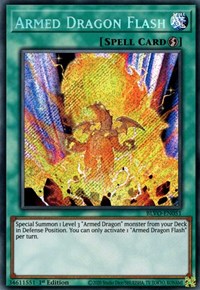 Armed Dragons absolutely destroyed the Top 10 this week, despite some of their key cards rising in price. We've already seen this deck played a few different ways at this point - we featured not one, but two builds from Yacine and Sam - and Armed Dragon Flash is a staple at 3 in all of them. There's an obvious comparison: this is Quick Launch for Armed Dragons. It's got a once-per-turn clause, sure, but it's still a fundamental starter card for the strategy, even if you're running the variant with Artillery Catapult Turtle.

Note that Flash didn't even crack the Top 15 last week; it went from $9.50 to $12.50 in the last six days, and still sold way more copies. Lots of players seem genuinely interested in giving this deck a shot. 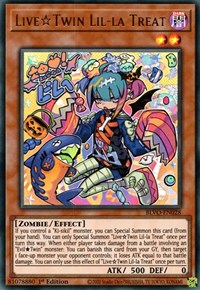 Up from Number 12 last week, Live Twin Lil-la Treat slowly slid from $6 in presales to about $3.25 at launch, which is where it's stayed ever since. The buys here were likely a mix of legitimate player interest and speculation, though it's a little tough to gauge because there's no way to tell if most buyers are seeing this as a 1-of in Live☆Twins just for the name, or a 3-of for… reasons I don't think I can conceive.

Regardless, Live☆Twins once again seem on the verge of exploding, but haven't quite managed to capture a Spirit Charmers level of fandom yet. 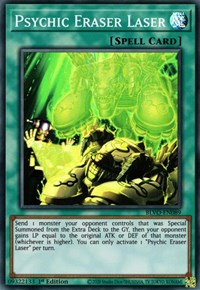 One of the most speculated cards in Blazing Vortex, Psychic Eraser Laser fell one spot from Number 5 last week to land at Number 6. Lots of people picked up copies of this card in the past week, but the average purchase numbers were well above three copies, and when the price dipped from 2 dollars to 90 cents on release day investors swooped in. The result was a return to a value of about $1.75 as of this writing.

As we said last week, Psychic Eraser Laser may not be the best at what it does, but at the very least it's a solid budget answer to plenty of problem cards. I'll be surprised if this sees play in highly competitive tournaments, but as a bit of a leg up for budget and casual players I think it's worth considering. 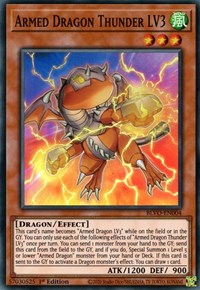 The defacto search with Armed Dragon Flash, Armed Dragon Thunder LV3 kicks off the sequence of pitch-from-hand plays that get you to Armed Dragon LV10 as early as Turn 1. Up from Number 7 a week ago, it's currently worth about 50 cents and the demand seems to be coming from real players looking to finish out their playsets. While Artillery Catapult Turtle is arguably the better combo starter, it's a moot debate because you should probably be running both.

Note that while Artillery Catapult Turtle didn't make the Top 10, it did jump mid-week from 3 dollars to 9, settling at the 8 dollar mark. People are really investing in this deck. 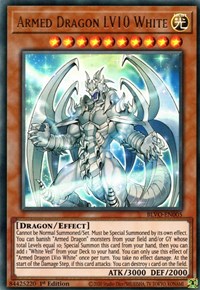 Also popularized by newer builds of the Armed Dragon Thunder deck, Armed Dragon LV10 White started to get some respect as an extender, and a finisher that leads into game-winning plays with Superdreadnought Rail Cannon Gustav Max and Superdreadnought Rail Cannon Juggernaut Liebe. This thing was just barely Number 10 on the sales charts last week, and now it's firmly in the top half of the countdown. The price has remained steady, too, still hovering under 3 dollars. 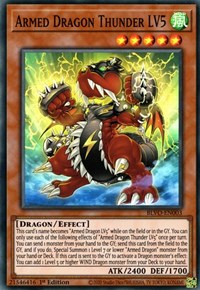 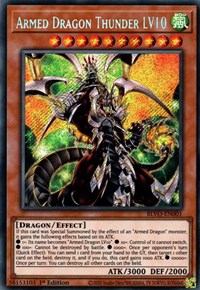 Armed Dragon Thunder LV10 was a solid 10 to 12 dollar card in presales, but the fact that it dipped to 8 bucks upon release just made it that much more attractive to buyers. It popped back up to 9 dollars in a couple days, but at that price it feels pretty approachable for a Secret Rare. The growth in demand here is astounding and vendors might have underpriced it a bit: Armed Dragon Thunder LV10 went from Number 14 on the charts last week, to Number 2 now, which is just massive for a card that's new, unproven, and almost 10 dollars a pop. 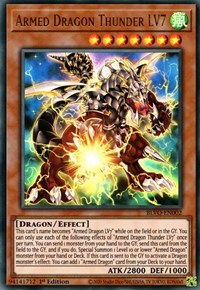 Finally, Armed Dragon Thunder LV7 has been wild to watch over the last two weeks. Most cards start off over-valued in the first day of presales; the first vendors to list new cards don't really know what the secondary market will support, so they tend to price cards a bit high. That meant Armed Dragon Thunder LV7 debuted at 6 dollars. A few days later it was down to almost 3 bucks, but then it rebounded and by February 2nd it was almost $6.50. It held in that range until BLVO officially released, promptly plunged to $2.75, and then it rebounded again when demand exploded for a second time. Now it's almost 7 dollars, and it's the best-selling Yu-Gi-Oh card on TCGplayer.

Right now, I don't expect to see Armed Dragon Thunder in the Remote Duel Invitational this weekend. But if somebody figured out the spice and did wind up bringing some variant of it to the tables on Saturday, I wouldn't be entirely surprised. This theme's carrying a lot of momentum right now, even though nobody expected it to be competitive. Even if it doesn't happen this weekend - and again, I wouldn't bet on it - we're just a couple weeks out from the next Remote Duel Extravaganza. Qe'll definitely see some people playing Armed Dragon Thunder there.

Just outside the Top 10, we saw Greater Polymerization come in at Number 11, as well as S-Force Bridgehead and S-Force Rappa Chiyomaru finishing at Numbers 12 and 13. Perhaps more notable, Heavenly Zephyr - Miradora ended the week at Number 14, costing just $15 since launch day, while Sacred Tree Beast, Hyperyton - the fallback plan if True King of All Calamities gets canned on the next F&L List - was speculated hard once again, and clocked the Number 15 spot.

That's it for this week, but stick with us through the weekend for a great article from Dan Parker, and fresh deck lists as soon as they're available from the Remote Duel Invitational!