Battles of Legend: Armageddon dropped one week ago, and today we have the first look at the set's best-selling cards.

Two weeks ago we saw Number S0: Utopic ZEXAL erupt into the Number 3 position, telegraphing future interest in the Numeron theme as would arrive in BLAR. Sure enough, you can look at the Top 10 today and see that Numerons were the single biggest driving force in the marketplace since the latest Battles of Legend hit stores, with almost every Numeron card in BLAR making the Top 10.

For most people that probably would've been an easy bet to make. But there's some interesting information there that we can glean more competitive insight from – more on that as we get to it. But the non-Numeron cards that made the Top 10 are pretty interesting too, and we have especially interesting data on the past seven months of action surrounding one of the most notorious cards in the game today, Mecha Phantom Beast O-Lion.

Without further ado, let's jump right into it. 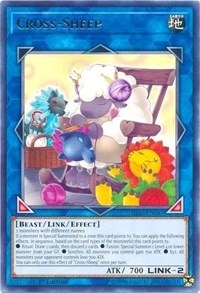 At its peak in February, Cross-Sheep was a $14 rare fueled by the frenzy for Structure Deck: Shaddoll Showdown. It was still solidly in the $8 range through June, but it dropped to 5 bucks this month once we learned it was up for a surprisingly swift reprint in Battles of Legend: Armageddon. It's still a useful card people want to pick up, in part because Invocation was also reprinted and is at least a bit more accessible.

While many players didn't want to shell out 5 to 10 dollars for a normal Rare card, the new Ultra Rare printing of Cross-Sheep's just $1.50, and that made it a big hit this week. 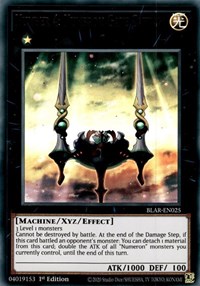 Seven of the eight new Numeron cards in Battles of Legend: Armageddon made the Top 10 this week, with the one outlier – Number C1: Numeron Chaos Gate Sunya – coming in at Number 11. And for good reason: Hanko discussed the Numerons a couple weeks ago, showing you how the strategy unleashes Number S0: Utopic ZEXAL for almost no cost and even less effort. We followed up with Sam a few days later, demonstrating how the deck works turn to turn, and Yacine was up next dropping a complete build.

The Numeron threat is very real, at least until September when we may or may not see the cards curbed by a new F&L List. That made investing in Numerons look really safe this week, and players responded in droves buying them up in massive numbers. Comparing unique purchases to quantities purchased we can see that there wasn't much speculation going on: just a ton of people wanting to pick up the cards and play them. 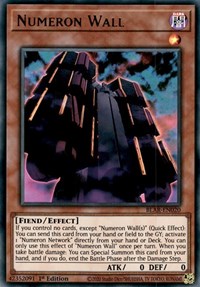 Surprisingly it wasn't even the least expensive Numeron cards that sold the most copies: Numeron Wall and the Numeron "Number" Xyz Monsters are all pretty cheap, and we'll often see that more affordable cards from a new theme outsell the pricier cards even if the big-ticket items are must-runs at three per deck. This time, not so much: the affordable monster cards, most of which are 2-ofs save this one, Numeron Wall, were outsold by the more expensive spell cards you need to run in threes. And Number C1: Numeron Chaos Gate Sunya, which you only run one of anyways, was the one card that just missed the Top 10.

But maybe that's not so surprising. The most talked-about build of Numerons right now is the Eldlich version, a deck that runs three Eldlich the Golden Lord at $130+, $30 worth of Ash Blossom & Joyous Springs, three Infinite Impermanence at $100+ for a playset, and then a bunch of kind of obscure, expensive cards in the Extra Deck (we're talkin' about you, Superdreadnought Rail Cannon Juggernaut Liebe).

Realistically? If an Eldlich player wants to make the switch to Numerons, they're not going to order the cheapy cards and then try and trade for the spells or something. They're going to pay the 75 bucks for everything in on shot and move on with life. What's cool about that as a non-Numeron player is that once we know that's the trend, it's another strong signal that Eldlich players are making that switch. Even if you're not interested in the deck yourself, you at least know that yes, you should be preparing for it. 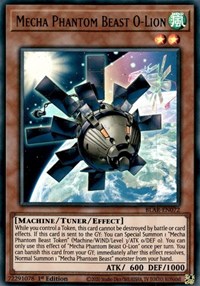 Never reprinted until now, Mecha Phantom Beast O-Lion reached a whopping $20 in mid June. That's almost as expensive as the Crystron Halqifibrax it's played with. Check this out. 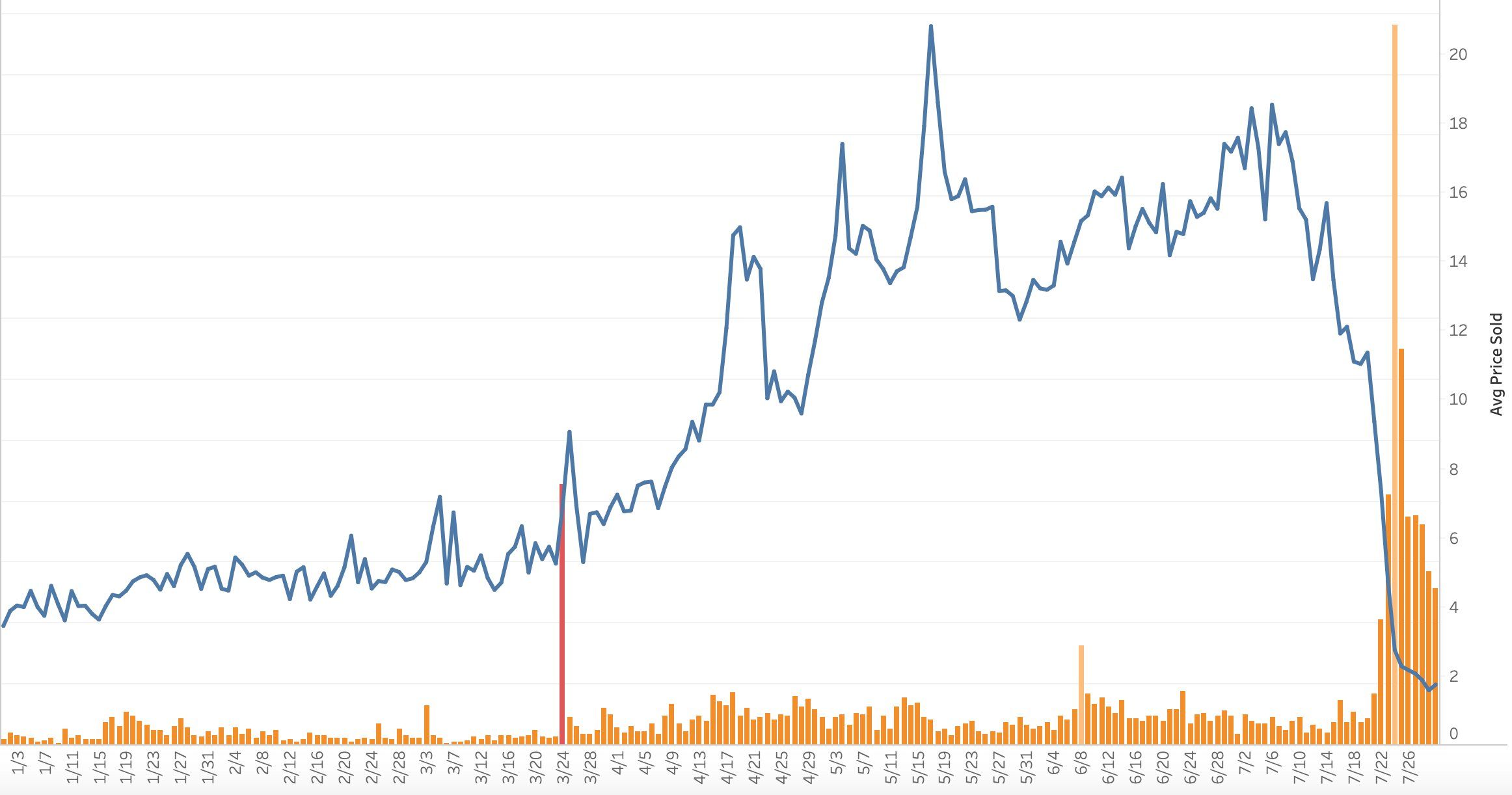 The pricing trends really tell you the whole story here. For the first three months of the year, Mecha Phantom Beast O-Lion is a $4 to $5 card. Then as Duel Overload approaches it starts fluctuating between $4 and $7 and the set drops on March 20th. Four days later on March 24th everybody and their mother realizes they need it, creating that big demand spike in red. Mecha Phantom Beast O-Lion vaults to $9 overnight and it just keeps climbing until mid May.

It continues to climb, almost making it back to the $19 mark before news of the BLAR reprint sends it spiraling downward. On launch day the Ultra Rare's less than three bucks and the number sold is almost three times the number that was sold back on June 24th. Today, Mecha Phantom Beast O-Lion's about $1.75 after a week of heavy buys, from a mix of players and investors alike. 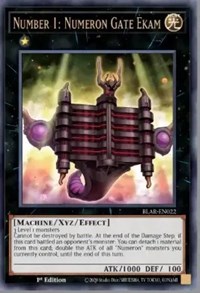 You can't play Numerons without Number 1: Numeron Gate Ekam, and you probably want two copies, especially since it upgrades into Number C1: Numeron Chaos Gate Sunya. Realistically all four of the regular "Number" Numeron Xyz are about equally important, and they all sold a similar number of copies. 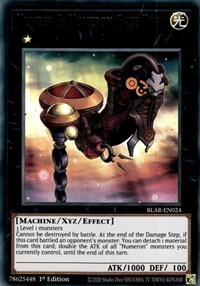 Number 3: Numeron Gate Trini finishes out the four core "Number" Numerons, barely outselling Number 1: Numeron Gate Ekam by a marginal number of copies. There's nothing to read into here: if you're playing Numerons, you at least need to own two of each, even if some future build somehow winds up skimping on some of the Xyz. 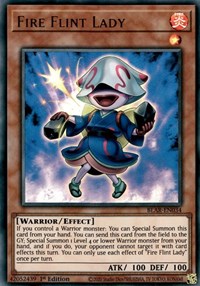 Fire Flint Lady's the one card this week that saw massive speculation, but still scored enough unique purchases to make the Top 10. Make no mistake, a lot of players bought this card because they want to run Infernoble Knights. But the number of copies sold was roughly four times the number of buyers, and there were tons of them, so speculators were certainly getting in on the action. At a Market Price of about $1.50, there are clearly lots of people willing to bet that Fire Flint Lady has a future upside.

Infernobles were proven competitive in the OCG, and the demand for the early entries from Toon Chaos, combined with strong presales for upcoming cards in Rise of the Duelist – cards like Infernoble Knight Emperor Charles and Infernoble Knight Oliver – is demonstrating solid interest in the theme so far. Will the deck make it in the TCG? We won't know for a few weeks, but for now Fire Flint Lady was a (wait for it) hot buy. 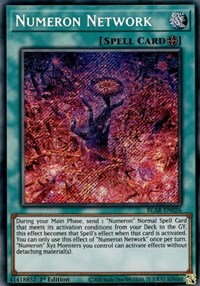 Numeron Network's almost $15 and the quantity moved through the TCGplayer Marketplace this week was shocking. With Battles of Legend: Armageddon fresh in the market there were lots of high-demand cards, but the fact that a card this valuable outsold almost all of them is pretty remarkable.

Numeron Network an obvious three-of in any Numeron deck, and with how Battles of Legend sets tend to go it's difficult to imagine it dropping in value even if we lose Number S0: Utopic ZEXAL in September. Which honestly, I'm not entirely convinced will happen. 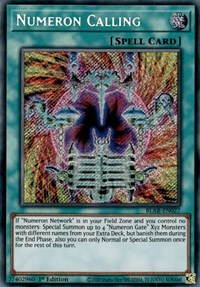 Finally Numeron Calling has a pretty significant price tag too at 5 bucks a pop, and as you'd expect, it sold roughly the same number of copies as Numeron Network – roughly 5 copies more. These are essentially one card for this strategy and playing fewer than three copies probably won't be an option, so the similarity here is easy to understand.

What else was big? So yeah, there was Number C1: Numeron Chaos Gate Sunya at Number 11. Dragon Buster Destruction Sword came in at Number 12, because the only thing more annoying than losing to Dragon Buster Destruction Sword is getting styled on by a foil copy. Fossil Fusion was Number 13, Weathering Soldier finished at Number 15, and Number S0: Utopic ZEXAL continued the Numeron love at Number 14. The rest of the Top 20 was Artifact Sanctum, Madolche Anjelly and Fossil Warrior Skull Knight.

That's it for this week, but stick with us through the weekend as Zach writes on his experience with the Numeron app, and Paul compares some of the differences between Magic and Yu-Gi-Oh. To get notified about those articles and more, follow us over on the official Yu-Gi-Oh! Infinite Facebook Page and Twitter. Have a great weekend!