The long-awaited Rise of the Duelist dropped today, but preorders have been going on for the better part of two weeks here on TCGplayer, and the result was a Top 10 for the week that's packed with ROTD picks.

The biggest strategies causing shifts in the marketplace should be no surprise, as players started to pick up cards for the new Dogmatika theme and the now-fully-fledged Infernoble archetype. But at the same time, sleeper hits started to emerge at the budget level, and it all started with everybody's favorite mix of cuddles and bloodcurdling horror. 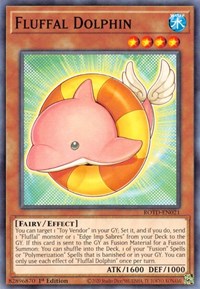 Rise of the Duelist is a really competitive set: the Dogmatika and the Infernoble Knights are both tournament level decks, while Forbidden Droplet and Triple Tactics Talent are two of the year's best tech cards. The set's not cheap either, with many of the most competitive picks debuting as high-priced Secret Rares.

But that's not to say that ROTD has nothing for casuals, nor competitive duelists who are just looking for a new strategy on the side. Some of the set's biggest sleepers are the new cards for Fluffals, starting with Fluffal Dolphin. The Fluffal deck's usually been played as an OTK strategy that hits hard and burns out fast, but as Fluffals emerge as a more well-rounded strategy that's better at going first, both of Dolphin's effects are geared toward creating longevity for a deck that's often struggled in that metric. Combined with hype for the deck's new Fusion Monster we might see a Fluffal revival.

From the ridiculous to the sublime, Dogmatika were all over the Top 10 this week even if their key Secret Rares were too scarce to reach the best-seller list. The $15 to $20 price tag on Dogmatika Ecclesia, the Virtuous didn't do much to deter determined Dogmatika fans, as lots of players moved to pick up the Dogmatika three-of before its official release.

Armed with the theme's core search effect and easily Special Summoned straight from the deck with Titaniklad the Ash Dragon, Dogmatika Ecclesia, the Virtuous likely to be one of the hottest cards of the year. It'll be interesting to see where the price on this goes now that we're at release day. 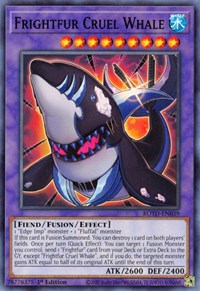 Back on the Fluffal side of things, Frightfur Cruel Whale brings a lot of range to the deck that didn't really exist before. Its removal effect helps clear the way for bigger plays, and as a Level 9 it leads into set-ups with True King of All Calamities. Paired with the new Edge Imp Scythe, which came in at Number 11 this week, you can drop it on your opponent's turn to disrupt their plans. From there the Scythe can even protect the card of yours you'd destroy.

Both Doug and Loukas called out this card as a hit in their content this week, and it looks like they were definitely on to something.

Down from Number 3 last week, Fire Flint Lady's stepped aside in part to let the Infernoble Knight cards she's played with take center stage. As you'll see in a moment, two of the week's Top 3 best sellers were Infernoble monsters. The Infernoble Knights were a successful combo deck in the OCG, and that's an environment where they have to contend with Maxx "C", a problem that doesn't exist here. With Toon Chaos and Battles of Legend: Armageddon having set the stage, it seems like a lot of players are stepping up to bat for the next generation of Noble Knights.

We'll have to see what the numbers look like next week, but right now it seems like lots of competitors are picking up Infernobles with real competitive intent. 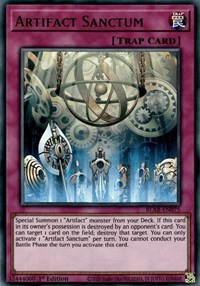 Leon called this one out in his video this week, highlighting the fact that Artifact Sanctum's historically been one of the most volatile cards in the game. In the past five years it's been as low as a dollar, and as high as almost 50 dollars. Played with cards like Artifact Scythe, Artifact Sanctum rotates in and out of Side Decks format to format, and right now Battles of Legend: Armageddon has opened up the chance to grab copies for about two bucks a pop.

Artifact Sanctum's not reprinted very often; it debuted in 2014'sPrimal Origin, it was reprinted a year and a half later in the 2015 Mega-Tins, and then it was two years before it appeared again in Battles of Legend: Light's Revenge. It's been three years since that release, and it was just finally reissued in BLAR. Reprints of Artifact Sanctum are coming further and further apart, so if you want a playset for your decks it's a great time to grab one, and if you want to make a long term investment it's great for that too.

Shaddoll Schism's a key component of many Dogmatika decks, searched with El Shaddoll Apkallone when you send it to the graveyard with Nadir Servant. It's part of an exceptionally common opening play that leads into a field with Dogmatika Maximus, Dogmatika Ecclesia, the Virtuous, El Shaddoll Winda and Dogmatika Fleurdelis, the Knighted, making three negates off one card. If you haven't seen that yet, you can watch Sam demonstrate it in his latest video.

Shaddoll Schism's not cheap right now, but it's not overly pricy either: as a one-of singleton its current Market Price is just under $4, which is where this type of card often settles. It's not likely to shift much, and if you want to run Dogmatika you probably need to own it.

Speaking of off-theme cards played in Dogmatika, here's the next one. When you're resolving Dogmatika Maximus' effect and sending two different monsters from your Extra Deck to your graveyard, sending Elder Entity N'tss as one of those two cards trigger's the Elder Entity N'tss ability to target and destroy any one card on the field as a bonus. It turns Maximus into an even more disruptive card, helps shut down combos and removes problem cards from the field so you can go for wins.

Elder Entity N'tss was $3.50 a month ago, and it reached a high of $6.50 this week. There are several hundred copies on TCGplayer right now, but the way price walls are looking, it could easily jump to $7 or $8 if certain vendors make specific moves. Lots of players are going to need two copies for their Dogmatika decks, and right now it seems undervalued at its current lowest available price of 5 bucks. 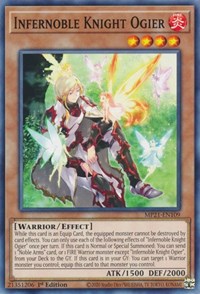 Both cards are incredibly cheap right now at less than 50 cents, and as two-ofs in most Infernoble Knight builds they could have a bit of upside. Anyone looking to play the deck is going to need multiple copies, and the low barrier to entry made Infernoble Knight Oliver and Infernoble Knight Ogier top picks for what could become a new top deck.

We're a simple people: we see Invoked and Shaddolls back in the game and we buy Cross-Sheep.

Numerous players looked to play catch-up on the Battles of Legend: Armageddon reprint of Cross-Sheep this week. Cross-Sheep's a flexible card that keeps popping up in a variety of strategies, and with Invoked and Shaddolls back in the mix thanks to Dogmatika, it clearly looked like a good time to grab some more Sheep while the Ultra Rare hovers around 2 dollars.

That's it for this week, but stick with us through the weekend as we continue to bring you articles and content in the wake of Rise of the Duelist. If you're not following our socials just yet, check us out over on the official Yu-Gi-Oh! Infinite Facebook Page and Twitter so we can tell you whenever we post something new here on Infinite.