What should have been an exciting celebration of Pokémon's 25th Anniversary has instead been replaced with a wave of frustration for collectors across the world. Collectors, content creators, and scalpers alike have taken to McDonald's in a frenzy for the anniversary starter Pokémon packs this week. Twitter, Reddit, and Instagram are full of photos of 10+ happy meals on a table. While some creators are saying that they are donating the food to those in need, the community is now questioning the excessive greed shown by people collecting the packs.

Is this product worth the hype? Currently, the most expensive card in the set (Pikachu) is topping out at only $8 for non-foil and $50 for a foil version, while there are currently listings on Ebay for cases of the booster packs between $1,000 and $1,500. Other popular Pokémon products, like Vivid Voltage or the upcoming Shining Fates, have a much higher ceiling for value for collectors and flippers.

Sadly, this sort of news has become the norm for the Pokémon TCG community and it isn't even the only Pokémon product to be hoarded this week.

Though The Pokémon Company Inc. has stated that they are working to fix problems regarding the supply of upcoming and previously released sets, it seems that the McDonald's problem will continue due to a lack of clear rules regarding the purchasing of Happy Meal toys.

After the initial craze to find cards died down, the community turned inward to question who these products are for. While McDonald's happy meal menu items are designed for children, the Pokémon collecting community trends closer to the teenager-to-young-adult range. As a consumer of various card games, I'm used to hearing that a given product isn't for me, but completing your collection is a much bigger part of Pokémon than it is for Yu-Gi-Oh Or Magic. Collectors in other games may be happy to find "premium" versions of their favorite cards, while the Pokémon community is full of fans who pursue every printed version of a given Pokémon or character. 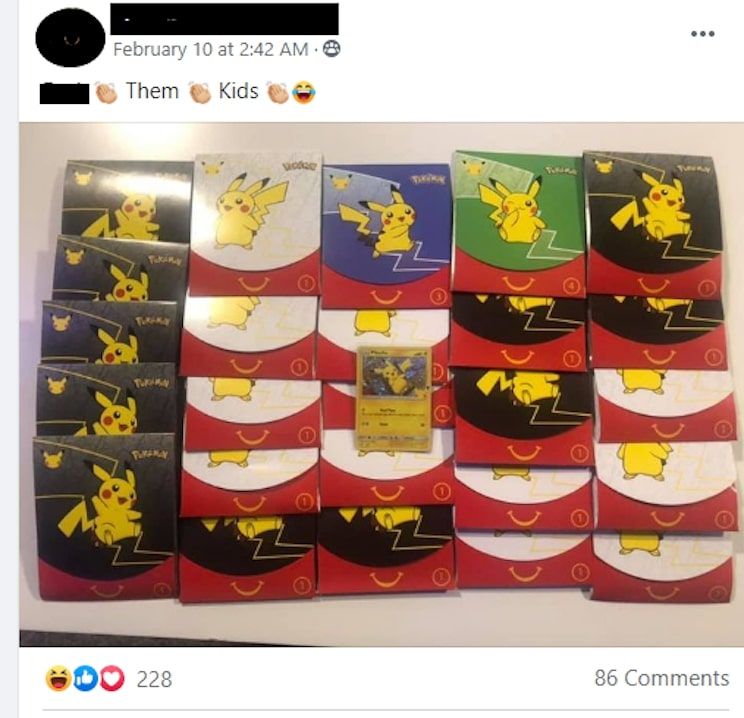 Scalpers are considered "evil" in the community for driving up prices by artificially reducing available supply. Unfortunately, content creators that buy exorbitant amounts of products to use in videos aren't that different when it comes to their impact on the community. Either way, casual collectors and younger fans either miss out on a product designed for them, or are forced to pay inflated prices on the secondary market.

Everyone in the community wants the Pokémon TCG to continue growing, and that is impossible without showing the great and positive impact of the game to the younger generation. Your goal might be to catch 'em all, but make sure to leave some for the Youngsters.