Thanks to MetaZoo for this exclusive preview.

The sun has set, and darkness reigns. As the light leaves and night takes over, terrifying cryptids stalk the land looking for their next meal. Contracting these powerful Beasties can bring you one step closer to your goal of becoming a Master Caster, as long as they don't eat you first! Make sure to bring a flashlight, because in MetaZoo's Nightfall, there is always something going bump in the night. 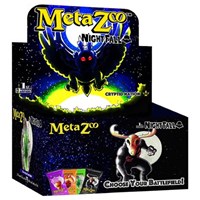 Nightfall is the second set for the exciting new game MetaZoo. This set focuses on the Cryptids and stories found in North America, so there are plenty of references to stories you may have heard around campfires or at slumber parties. In MetaZoo, these stories are real. The Mothman hides in Point Pleasant, Bigfoot roams Missouri, and the Bell Witch is no longer confined to horror movies.

In a set full of the most ferocious Beasties to be found in North America, one stands apart as the sole judge of death. Everything that lives does so by this Beastie's allowance, and if you see them... it is time to make your peace, because you've reached the end of your life. It is time for the return of the Grim Reaper!

Before Nightfall, the Grim Reaper was product-hover id="251875" as a limited-print promotional card with a different card design and entirely different mechanics. With a new printing in Nightfall, the character has been completely redesigned to better represent the slow, unyielding presence of death as the Grim Reaper continues to harry your opponents until they finally submit.

The Grim Reaper has a rather difficult contracting requirement, requiring 9 Aura that can only be generated from Dark Auras, but they can be contracted into play from anywhere! Whether they get sent to the Limbo, Cemetery, or Afterlife, death can only be delayed, never completely removed.

The Grim Reaper's attack is the real icing on the death cake here. The End only does 1 damage, but, because of the Destroyer trait, that is enough to take care of any Beastie. The attack really shines when you are able to damage an opposing caster, because then, as long as you don't roll a 1 or 6 on a d6, this attack destroys the opponent! Although the steep costs and weak stats might make the Grim Reaper look ineffective, their ability to completely end the game in a single attack might make them the most terrifying Beastie of all. 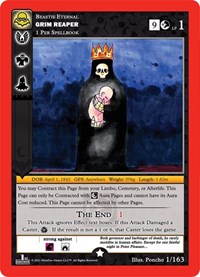 Outside of gameplay, the Grim Reaper is one of the most popular myths in the English-speaking world. The hooded, scythe-wielding skeleton has continually permeated different forms of media and culture over hundreds of years. While other creatures like Mothman or Sasquatch are cultural stories rooted in the areas around where the stories were born, the Grim Reaper has existed for so long that it has reached its tendrils into most English-speaking countries. Since the first tales of Thanatos, humankind has been trying to personify the concept of death in order to lessen the terror that the concept inspires in people.

While plenty of other cards in the Nightfall set might resonate with some groups of people, the Grim Reaper can inspire awe, and maybe even a little fear, in anyone that opens a pack of Nightfall. As Nightfall is only the second set from MetaZoo, there is only a single set to compare prices and popularity to, but depending on availability, the Grim Reaper could be one of the most sought-after cards in the set. Just make sure your copy stays in the binder and not trying to send you to the afterlife!

Nightfall releases on October 22, 2021, and you can order your own box of Nightfall right here on TCGplayer.