I know why you're here. Who clicks on a link titled the "The Emrakul Deck" if they don't want to see some giant tentacle Eldrazi? 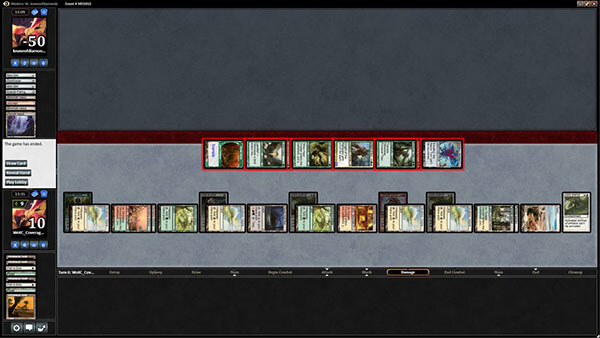 Welcome to Modern in my world.

I'm Corbin Hosler. I've worked on a lot of projects in Magic and worn a number of different hats, but you can most commonly find me on the podcast Brainstorm Brewery or working on the Wizards of the Coast coverage team (I'm one of the guys in the background working on a laptop when you tune into the Pro Tour).

I play a lot of Modern. And I do mean a lot. And while a lot of it is with my Merfolk, my favorite deck, even more of it is with brews. You name it, I've tried to play it. From Allies to Taking Turns to Twiddles, I've cast a lot of spells you won't see often. Oftentimes this doesn't work out well, but every so often I am able to design or tweak a deck that I believe has real legs in Modern.

The Emrakul Deck is one of those.

A parade of mana dorks — including the unexpected powerhouse that is Nest Invader — power fast starts and Windbrisk Heights activations. Lotus Cobra and a fetchland allows for a Through the Breached Emrakul, the Aeons Torn on the third turn. Knight of the Reliquary is an incredible toolkit and ramp spell all in one that just happens to grow into a game-ending threat on its own. Khalni Garden and Dryad Arbor provide surprise attackers and blockers to carry out your game plan. Summoning Trap doubles as a powerful six-mana instant or a punisher for anyone who thinks it's safe to Remand your turn two Lotus Cobra.

All of these parts work beautifully together to land haymakers your opponents can't deal with. You have the speed to race the fastest decks in the format and the tools to grind out the grindiest of decks.

I'm not claiming this is the next Tier 1 deck in Modern, but over a sample size of 50 or so two-man queues on Magic Online, I've won more than 60% of my games. The Emrakul Deck is real, and it's a blast to play.

Take a look for yourself.

I'll be bringing you my adventures as we traverse the wild, untamed world that is Modern in the coming months, and I'm excited to explore just how deep we can mine Modern. You can find my videos on TCGplayer's YouTube channel at https://www.youtube.com/user/myTCG.