A few weeks ago, I explored one of the more unique archetypes we've covered in Mining Modern: Mono-Black Devotion. 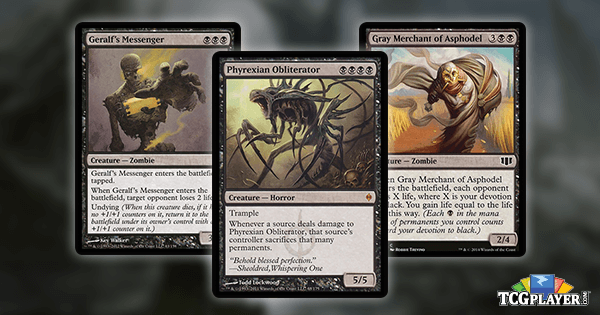 The idea behind the deck is simple: produce a lot of black mana symbols, make a bunch of mana with Nykthos, Shrine to Nyx and then drain them for a million life with Gray Merchant of Asphodel. After sharing the deck, the response from readers and viewers was pretty enthusiastic – you wanted more.

I don't necessarily want to just repeat decks so close together, but I did decide to take a reader suggestion this week and change the deck up a bit. Out went the small red splash for Blood Moon, and in came the green cards; Abrupt Decay and Eldritch Evolution in the main, and a host of sideboard cards to shore up certain matchups.

While this build of the deck doesn't look that different, it actually represents a pretty wide departure. Before the deck just wanted to curve out with recursive and powerful threats, but interacted poorly with some opponents. The new version has a lot more flexibility with Abrupt Decay providing versatility, and Eldritch Evolution really changes the way our deck can play.

There are a few really powerful lines for Eldritch Evolution, and I strongly considered playing a third copy. The ability to turn Bloodghast (another new addition) into Phyrexian Obliterator on the third turn is a fast clock, and turning Geralf's Messenger into Gray Merchant of Asphodel represents at least seven point of damage to the opponent and a gain of five on our end. Add in some additional flexibility with the card after sideboarding, and we go from a pure threats deck to a deck with many more toolbox options and the ability to play a controlling game.

Is it a better iteration than before? I certainly think it's more well-rounded. While Gatekeeper of Malakir shines in the right matchup, the deck before basically had a handful of discard spells but no other way to stop an opponent from executing their gameplan. If that gameplan happened to be a fair, creature-centric one, then Mono-Black Devotion shined. But any deviation from that exploited the mono-black build's weaknesses. The green addresses some of that, plus gives several stronger sideboard options to combat the wide range of decks in Modern.

I think there is more to explore here. Should the deck go all-in on Eldritch Evolution and really play a toolbox alongside the traditional threats? Should it double down on building devotion for Gray Merchant? More removal, or more discard? I'm not sure the best place to go from here, but I do think there's enough here to make it worth exploring.

And, in the meantime, you get to play Phyrexian Obliterator. Not such a bad thing.