It's easy to overlook Modern given the recent popularity of Pioneer. However, Modern remains a major format, with Amulet Titan, Eldrazi Tron and Urza archetypes currently dominating the landscape. Although all these strategies are tough to beat, they are linear in what they want to achieve which allows more aggressive decks to take charge. This week, we are taking a break from Pioneer to bring you more budget Modern decks with an emphasis on a much-loved fringe archetype: Soul Sisters and Martyr Proc.

Most heavy white-based decks over have focused on aggression with cheap and efficient creatures. Admittedly, there is Death and Taxes which is more disruptive, with Thalia, Guardian of Thraben being the headline card in these archetypes. However, what if we had the disruptive game plan with a life gain approach? This is where Soul Sisters and Martyr Proc come in, as both of these strategies use plenty of the same cards but adopt a different game plan. I believe both Soul Sisters and Martyr Proc are criminally underrated in Modern and deserve more attention than the format currently allots them.

Let's begin with Soul Sisters. One major bonus of both of these archetypes is that they are affordable even if built optimally. Soul Sisters centres around two cards, Soul Warden and Soul's Attendant, which gain incremental life to buff up our win conditions in Serra Ascendant and Ajani's Pridemate.

Let's start with this budget build of Soul Sisters, which comes to just under $110. Fortunately, the core of Soul Sisters is affordable with Serra Ascendant being the only card over $6. Dismember may look odd in this list, but there is a method to the madness. Within the build, it essentially costs one mana given how much lifegain there is which offsets the Phyrexian mana, creating a fantastic alternative to Path to Exile. Ajani, Strength of the Pride is highly synergistic within the build as it creates more Ajani's Pridemates and also offers a compelling artifact sweeper against Urza and Tron strategies.

One of the biggest draws to playing a white-based strategy is the sideboard options, since white boasts the best sideboard cards in Modern. The key ones are Stony Silence and Rest in Peace, which offer the best answers to the questions of Modern.

Your creatures aren't very powerful on their own, but with help from Honor of the Pure, they can end games quickly. This budget version of Soul Sisters will provide what you need to get started and offers a semi-competitive approach at FNMs. Luckily, the bridge between budget and optimal is fairly close, and adding another $100 to the build gives you a powered-up version of the fringe strategy.

Rounding out to $230, the ideal list incorporates Path to Exile, Archangel of Thune, Gideon, Ally of Zendikar and Flagstones of Trokair for a more competitive edge. The upgrades are simple enough: replace Dismember with Path to Exile, Flagstones of Trokair with a few Windbrisk Heights, and Archangel of Thune with Martyr of Sands. You may decide to keep Martyr in your build, but finding room for both Martyr and Archangel can be tricky. I prefer Archangel of Thune in these lists as it's a potent threat and another payoff card for life gain. It's also excellent to be hidden away under a Windbrisk Heights for that powerful alpha attack. Gideon, Ally of Zendikar is a token generator and anthem in one package, and while anthem effects aren't always necessary in this list they do offer another way to overwhelm your opponent.

If you want a more controlling approach, Martyr Proc is a strategy which adopts plenty of the same cards as Soul Sisters. Instead of being the aggressor and gaining ridiculous amounts of life, the approach with Martyr Proc is to grind out your opponent with inevitability by using cards such as Ghostly Prison as insurance until you can recur threats consistently with a forecasted Proclamation of Rebirth. If you ever want a change from Soul Sisters, Martyr Proc is a good way to repurpose your cards into a very different strategy.

Admittedly, this budget variant is more expensive compared to Soul Sisters, as we are incorporating a soft Gideon package as well as controlling cards which are worth more money. Gideon of the Trials offers an interesting "you don't lose the game" tactic which with Gideon Blackblade and Ghostly Prison can be difficult for your opponent to deal with. That buys you time to deploy threats and overwhelm the opponent. Wrath of God, Hallowed Burial and Day of Judgment are backbreaking against certain archetypes, and we can recur our threats with Proclamation of Rebirth or Emeria, the Sky Ruin, which over time gives us total control of the board.

Similarly to Soul Sisters, upgrading Martyr Proc costs just under $100 coming to $245 overall. Again, the replacements are straightforward: bring in Gideon of the Trials for Gideon Blackblade and Cataclysmic Gearhulk for Elspeth, Sun's Champion and Archangel Avacyn. You can replace Winds of Abandon by finishing off the set of Path to Exile.

Another benefit to running a mono-colored list is that you don't need to invest into fetch lands unless you want to. There are Martyr Proc and Soul Sister lists out there which run Windswept Heath or Flooded Strands too add deck filtering, but this isn't essential. If you want to hedge against non-creature strategies, Ranger-Captain of Eos may be one to consider as it acts as a pseudo-Silence while also grabbing one of your one-mana threats. Ranger of Eos is the better card in these builds, but combining both could be an option also.

There are a few tips to keep in mind when playing Soul Sisters or Martyr Proc. For instance, the combat rules with Serra Ascendant can be a little non-intuitive. If you are in a scenario where you are on 29 life and your opponent attacks with a creature, you can block with the Serra Ascendant, triggering lifelink which converts it into a 6/6. That's good to keep in mind, especially if you are choosing to be defensive with multiple Serra Ascendants. Sometimes casting an early Martyr of Sands is a fine approach so it can get a few attacks in. At worst, it forces removal from your opponent which isn't going to your bigger threats. It's easy to be greedy with revealing cards to Martyr of Sands to grant the most value, however, it's worth being selective on what you reveal to your opponent. Sometimes it's useful to represent that last card in your hand as a threat or a sweeper, when you know it's a land. You can also target yourself if you end up with Flagstones of Trokair and a Ghost Quarter, replacing them two Plains which is useful if you intend to turn on Emeria, the Sky Ruin. There are plenty of fine lines with both strategies, and over time, you will pick them up once you are familiar with playing them.

Looking ahead, there may be a possibility to add new Theros Beyond Death cards to these archetypes, in particular, Heliod, Sun-Crowned. 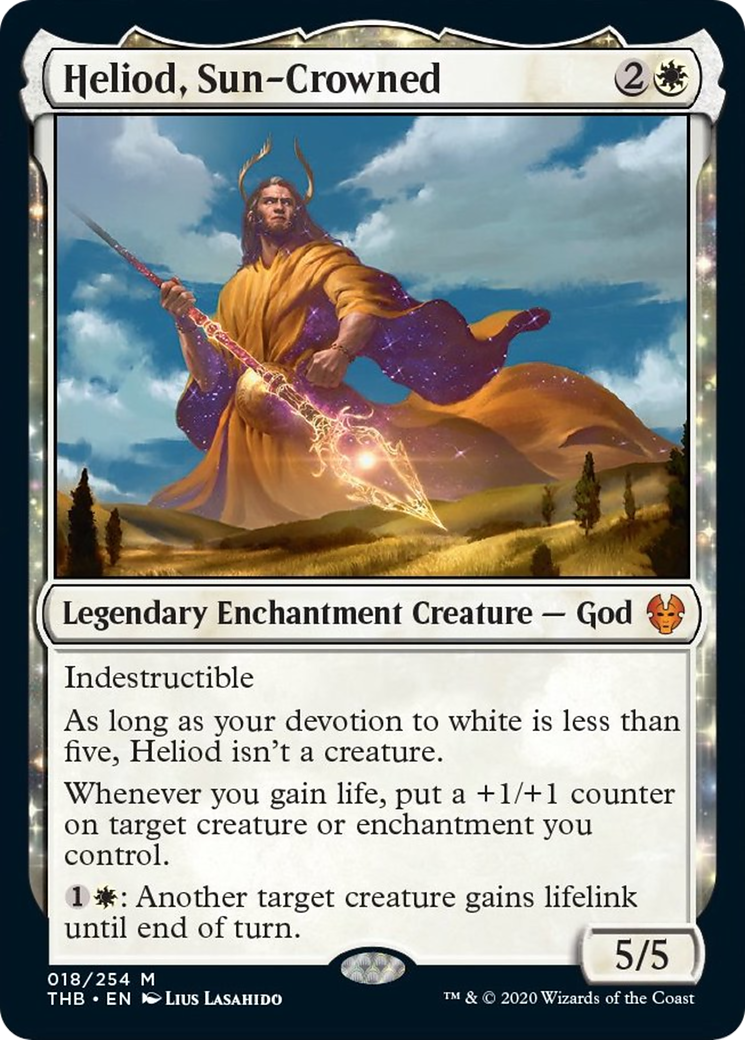 Heliod, Sun-Crowned already looks synergistic with the Soul Sister and Martyr Proc game plan with the amount of life gain the God promotes, however, that is not all. Heliod also offers a potent infinite combo with Walking Ballista, which has seen comparisons to Splinter Twin from the old days of Modern. This can be achieved in a few simple steps. You need to cast Walking Ballista as a 2/2 for the interaction to work, but by giving Walking Ballista lifelink from Heliod's ability, it will trigger Heliod's triggered ability when you remove a +1/+1 counter to ping your opponent. Then Heliod replaces the counter, and you can rinse and repeat. Although I expect this sequence to be most powerful in Pioneer, where the format feels fair currently, I believe it will have a place in Modern also. Within the Martyr Proc and Soul Sister build, I would incorporate these two cards in some capacity as it provides a different out from focusing on aggression or absurd amounts of life gain.

Additionally, you can tutor for Walking Ballista with Ranger of Eos or recur the artifact creature with Proclamation of Rebirth also, so there are ways to grab half of the powerful combo. I would not lean completely into the combo as that is a different deck altogether. But with the synergy Heliod offers coupled with Walking Ballista's flexibility, it's essentially free within the Soul Sisters and Martyr Proc shell. 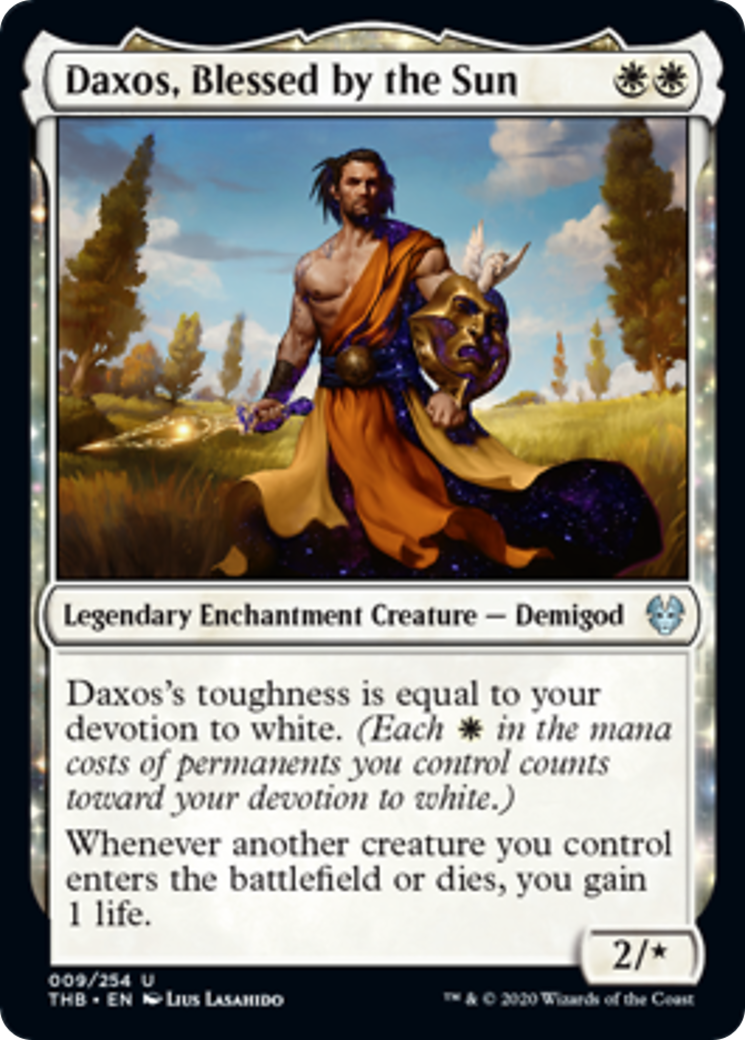 Lastly, Daxos, Blessed by the Sun is another "Soul Sister" which can be utilized within a Soul Sister build. While Daxos is an extra mana compared to Soul Warden and Soul's Attendant, he offers life gain when your creatures die which is something to consider going forward.

Soul Sisters and Martyr Proc have been around in Modern for a long time and remain viable options in the format. One of the best features of Modern is seeing a skilled pilot take down an event with a fringe strategy such as Dimir Mill, Selesyna Hexproof or even Soul Sisters. It proves that playing the best deck does not equate to success, as there are other components which influence these results. Fringe strategies benefit from being unexpected, which leads to under-preparation from your opponent. Realistically, you can play whatever you want in Modern as enjoyment should outweigh the competitiveness, however, if you find success with both then you are living the best Modern life.

Emma Partlow is a writer and Modern enthusiast based in Suffolk, England. She's been involved in Magic since Khans of Tarkir back in 2014, and loves helping players dive into Modern and Pioneer.