If there's one problem with Modern Masters releases, it's that you can't really feel the same excitement for its spoilers that you feel for brand new cards from brand new sets, with brand new worlds and brand new mechanics. This is because you've seen them all already. You're already familiar with what the set is offering as you've perhaps been playing with the cards for years already.

But there are three very common demographics that should feel a good deal of excitement for the set's spoiled goodies: 1) those players who were not around the experience when the original cards were released, 2) those who have been looking to pick up some of the cards that are included in the set in order to play them in older formats, and 3) those who feel a sentimental attachment to the original card.

I admittedly fall into the third camp.

The Great One himself.

Dark Confidant has two very redeeming qualities going for it in regards to why it hits that third category for me: it was first released in Ravnica: City of Guilds, which was one of my all-time favorite sets and blocks, and it was the Invitational card of Bob "The Great One" Maher, Jr. himself.

For the newer players that last statement might need a little bit of exposition.

You see, the Invitational was a format of yore that took the Top 16 best players from a given year - similar to the current World Championship - and pitted those players against one another to compete in various formats. For those familiar with the Community Cup, often times the formats would be unique, much like the stipulation Cube Drafts held there.

Each year after a winner was crowned, that winner would then go on to design their own Magic card to see print in a future set. Cards like Snapcaster Mage (Tiago Chan), Sylvan Safekeeper (Olle Rade), Meddling Mage (Chris Pikula), and Shadowmage Infiltrator (Jon Finkel) were all the result of Invitational winners. There were 11 Invitational winners in total, as the Invitational was held from 1997 to 2007. It has not been held since, unfortunately.

The subject and creator of Dark Confidant, one Bob Maher, Jr., is a Hall of Famer with one Pro Tour win, four Pro Tour Top 8s, three Grand Prix wins, ten Grand Prix Top 8s, a Masters win, and an Invitational win. This impressive resume is what lead him to earn the nickname "The Great One" and he could often be found in the same discussions with the likes of Jon Finkel and Kai Budde: two of the best - if not the best - players to ever grace the game. This is also the reason for people referring to Dark Confidant as "Bob" for those who were always curious but never knew.

While it is disappointing that the Invitational is gone, having offered one of the coolest prizes in the game's history - a custom Magic card created by the winner and illustrated in their own likeness - the results from those events will live on for as long as the game does, I presume, and this third printing of Dark Confidant (fourth if you count the awesome judge promo with the old card frame) is proof of that. 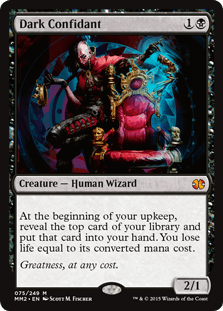 I've always been a fan of Dark Confidant, especially in conjunction with cards that allow you to manipulate the top of your library, like Courser of Kruphix, fetchlands, or Sensei's Divining Top. Courser is a particularly potent teammate as it allows you to gain back some of the precious life points that you would otherwise be burning away with the human wizard. When it was first printed Dark Confidant was often compared to Phyrexian Arena: the three mana enchantment that gave you an extra card every turn, but at the cost of one life. The parallels are obvious.

Dark Confidant is an incredible creature in both tempo and aggro decks where you want both efficient creatures and card advantage. When the two happen to come in the same package, it's even better. The fact that you will often hit a land with Dark Confidant between one third and half the time means many of the cards drawn by Dark Confidant over the course of its entire lifetime have been free. That's pretty amazing if you think about it.

Dark Confidant is one of the best examples of the "life as a resource" philosophy in the entire game, wherein he asks us to pay portions of our precious life total in order to gain an advantage elsewhere.

I remember when I was young and naive and I first saw Necropotence. I wondered why anyone would want to pay life to draw a card. "But having more life is how you win the game," I would think. This was the late nineties, and games were not the same then as they are now; I think Magic has somewhat paved the way for the way gamers see games nowadays and the way we approach resource management within those games. It has taught us that the only point of life that will cause us to lose the game is the very last one, and each one prior should be used, in whatever way possible, to help us win the game instead. I think this is a common feeling held by newer players, as one of the main tenets of Magic is that losing all your life points equates to losing the game; hence things that Diminish our life total are things that take us farther away from winning.

It makes sense on paper, this attachment to life, but it is far from logical in practice. I believe it to be the way our parents played games or the way our classmates, whose sole experience in gaming is Monopoly, might play games. Dark Confidant teaches us that simply because an object in the game is the focus of winning the game, does not mean it cannot be leveraged. Dark Confidant teaches us this once per turn, during our upkeep, game after game. "You're worried about giving up life points?" he scoffs.