Magic has a number of "sol lands," but there is exactly one soul land. And it didn't take very long for the stalac-tightest land in the game to make a crater-shaped impact on Magic: The Gathering. 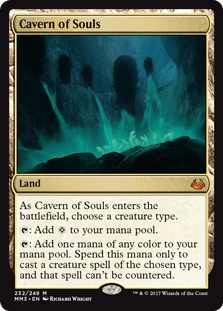 Cavern of Souls may have started off with an immediate impact on the rules, but it made an even bigger and more far-reaching impact on competitive Magic after that. Starting with Pro Tour Avacyn Restored and never relenting, Cavern of Souls is an integral part of nearly every constructed format.

Equally as loved as it is hated, Cavern of Souls serves as a mana fixer for any decks relying on a single tribe of creatures that often range across many colors of mana, like Allies or Humans. Cavern of Souls makes Ancient Ziggurat look ancient. It makes City of Brass unable to talk Brass tacks. It makes Undiscovered Paradise look like a well-discovered dumpster behind Taco Bell on Paradise Avenue in Durdle, Nebraska. It is one of the rare cards in Magic that simultaneously has kitchen table appeal while being a dominant player in Magic'stop echelons of competitive play.

That's not why people love or hate the card, however. Making tribal mana is cool and all, but Cavern of Souls also has more text on it, the hallmark of every great card. Just when you thought the ink had maybe run dry, Cavern of Souls keeps going with a nifty little "uncounterable" clause that lets tricksy hobbit tribal players sneak their creatures past Gollum's Cryptic Command.

I've experienced the unbridled joy of being on both sides of the aisle on this one. For players like myself, Cavern of Souls naming Beast followed by Thragtusk was my anthem for an entire year of Standard. Double points if you follow that up with a Cavern of Souls on Angel plus Restoration Angel for the Thragtusk. Beast, conveniently, is also the creature type for Craterhoof Behemoth, and I think we know how that story ends. Well, fine, I'll spell it out. It ends with them dead 10 times over the turn you cast an uncounterable Craterhoof Behemoth. Happy now?

But for every uncounterable Thragtusk I've shoved into open mana, I've also had the distinct displeasure of being on the opposite side of Cavern of Souls. As one of "those people," alternatively known as "scum," who play Miracles in Legacy, I've made the acquaintance of Cavern of Souls from the other side of the field of battle and it really drains my Force of Will to continue playing the game. Let's just say I would have gotten away with countering that Sanctum Prelate if it wasn't for those meddling kids who later became game developers that got jobs at Wizards of the Coast where they worked their way up the ladder until eventually being part of the Avacyn Restored design team just so they could print Cavern of Souls to mess up my intricately laid plans. The long con.

Cavern of Souls may have had an immediate impact on the rules and a bigger, far-reaching impact on competitive Magic, but it had an absolutely enormous, planet-smashing impact with galactic reaching implications on my wallet. 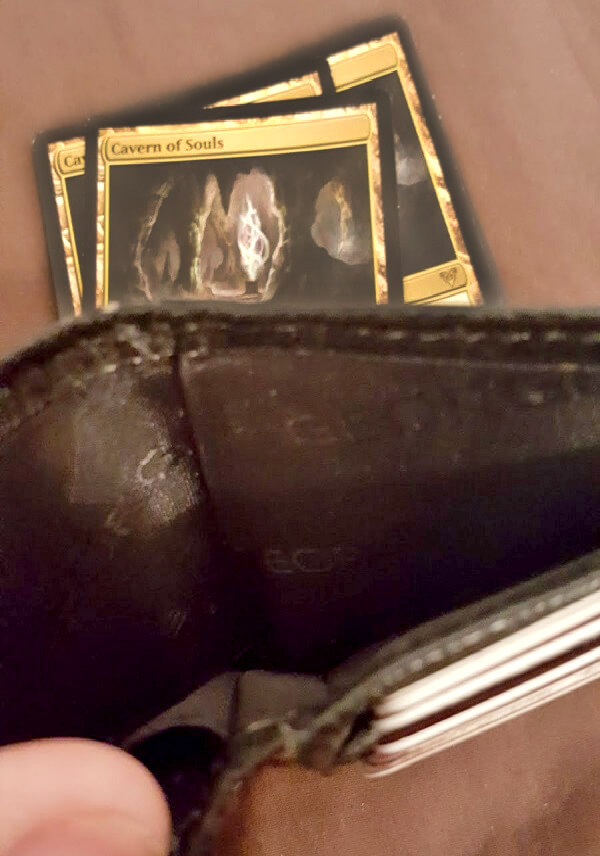 I made a classic blunder. When Cavern of Souls rotated out of Standard I thought to myself "these suckers are like 20 bucks, I'll wait for them to go down in price and then I'll buy them." Ohhh boy. Hate to see that. Awkward. They never did go down in price. Instead they kept rising. I could faintly hear the sound of a sad violin playing in the background as I sheepishly purchased Cavern of Souls for $40 each so I could play my beloved Bant Eldrazi deck last year. The price hasn't stopped there either, making me look like some kind of delayed genius for getting in on the Cavern of Souls hype years late, but still before they reached their peak.

That may be ending. Because as you may have suspected from me randomly writing a theme piece on a playable, expensive, Modern-legal card during Modern Masters 2017 preview season, yes, Cavern of Souls is in Modern Masters 2017. But don't feel too smart about figuring this one out because I also have theme pieces coming up on Obzedat, Ghost Council, and Kambal, Consul of Allocation and those are unrelated to any spoilers or card releases! They are pure, adulterated, fan fiction. Gotta keep people on their toes. Can't be too predictable.

Let's take a quick look at some of the lists in Modern and Legacy that make use of Cavern of Souls to fuel their strategy.

Even beyond these top-tier decks in Modern and Legacy, there are also plenty more tier two and beyond decks that rely on Cavern of Souls to either make their mana work or to simply make important creatures uncounterable.

I grew up casting Thragtusk and Restoration Angel off Cavern of Souls, and with those two cards spoiled already, Modern Masters 2017 is one Unburial Rites short of allowing me to draft my favorite Standard deck of all time. Now that is something I can get behind. I've already played Cavern of Souls in every other format. Why not Limited, too?