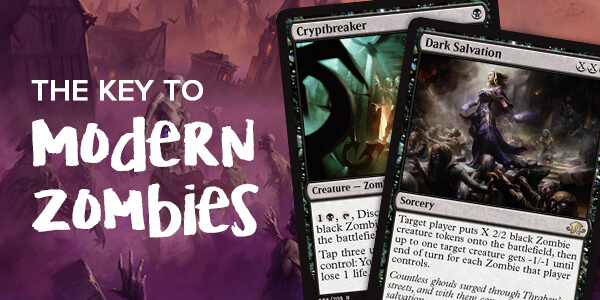 These two Eldritch Moon gems provide a much-needed axis of card advantage for Zombies. Cryptbreaker allows the deck to "go off" once it reaches a certain threshold of zombies or to simply pull ahead in a topdeck war. It can also turn unwanted discard spells or lands into creatures, which can then be used to draw more cards.

Dark Salvation has three modes. It can be Flame Slash, Gatekeeper of Malakir, or Zombie Ultimatum, depending on whether you cast it for one mana, three mana, or a ton of mana. There is a point in the Spirits match where back-to-back Dark Salvation in the late game swing a desperate situation into a commanding board.

Blood Scrivener is the other important card advantage engine in the deck. It works especially well with Crpytbreaker in that you can draw two cards off each activation so long as you can empty your hand, an endeavor Crpytbreaker can assist with via its zombie-making ability.

Tidehollow Sculler fits perfectly in the deck, combining a zombie body and disruption. Alongside Inquisition of Kozilek and Liliana of the Veil, the opponent's hand is under a lot of pressure.

Speaking of Planeswalkers, Liliana of the Veil is basically a removal/discard spell with upside. Discard Gravecrawler and then cast it from the graveyard. Sorin, Solemn Visitor's main function is to gain life since the deck uses its own life as a resource so much, though making Vampire Tokens comes up a lot, especially against decks with fliers.

Remember that Mutavault is also a zombie, so it can draw a card in a pinch off Crpytbreaker, cast Gravecrawler from the yard, or give something an extra -1/-1 with Dark Salvation.

Oath of Liliana can usually end up making a couple Zombie Tokens over the course of a game, which fits nicely into our overall plan of flooding the board with zombies to do all kinds of neat things with them.

Watch the videos to see how I pilot the deck. There are a lot of different cards that could potentially be good in the deck, but this is the version I am happiest with so far. I tested Death Baron, Relentless Dead, and a few other cards, and they underperformed, but feel free to modify the deck to your own liking and try out other things.

What to Sideboard IN

Lingering Souls comes in against Affinity, Jeskai, Jund, Abzan, and any deck with small fliers or lots of one-for-one removal spells.

Stony Silence is for Affinity, Tron, Eggs, and Lantern Control, but can also be brought in against Aether Vial decks (Merfolk, Hatebears) in small numbers since we have no artifacts with activated abilities.

Nihil Spellbomb comes in against Dredge, Goryo's Vengeance, Melira Combo, and anything that utilizes the graveyard.

Thoughtseize comes in against combo decks, but is flexible — add against any deck without Lightning Bolt where we need to bring in an extra card.

Burrenton Forge-Tender is for burn decks and Anger of the Gods, and I also bring in a few copies against Affinity decks that run Whipflare and Galvanic Blast.

What to Sideboard OUT:

Cryptbreaker can come out against decks where early blocking is vital, such as against Goblin Guide decks.

Path to Exile can come out against creatureless decks, including Scapeshift decks that don't run Primeval Titan. Same with Oath of Liliana. You can also shave some copies of Dark Salvation.

I'll take out one or two copies of Sorin, Solemn Visitor in matchups where life gain is less important.

Overall, be careful not to board out too many zombies since the deck's engine — Cryptbreaker + Dark Salvation — runs on a high threshold of them. Also be careful not to hurt your opponents' feelings as you crush their face with this new zombie deck!