Last week, I applied the Quadrant Theory to multiplayer, looking at the four quadrants with an eye to Magic games involving more than two people, and came away from an interesting rating system.

The downside to the Multiplayer Quadrant Theory is the limited flexibility of the system. A card that can score in every quadrant is considered amongst the best, but we know that a card like Pernicious Deed is certainly better than Gonti, Lord of Luxury, even though it scores poorly in the Early Stage quadrant.

This week I'd like to take a look at another rating system for multiplayer cards, created by Anthony Alongi, one of the original writers of casual Magic. His system was used to create a Multiplayer Hall of Fame. He rated EVERY CARD IN MAGIC, including the top cards in every color (plus artifacts, lands, and multicolored cards) in his Hall of Fame. I (with the help of many friends!) updated the Hall of Fame a couple of years ago. The rating system can appear complicated initially, but once it is broken down, everything is pretty straightforward. I'll go through each step, using the same cards we used last week to show how the system works.

Each element that we discuss below gives a rating of zero through eight. If a card scores zero, that element is nonexistent in the card. If a card scores an eight, it is the best for that rating in that color. Only one card in a color can score an eight in a category, so a seven is generally the top score. Going through each of the numbers in between:

Given these ratings, there is a fair bit of flex in this rating system. One person could give a card a four, while another would rate it a three or a five. This flexibility can create some variations in the ratings between players, but not too much.

This is the real feature of this rating system! Alongi would break down cards using animals to represent each of the six elements. While each category is important, they aren't equally important, so each has a multiplier that increases or decreases the value of a high rating in that category. Here are how the categories and the multipliers break down.

These cards are the ones that discourage your opponents from attacking you. It can be as basic as a creature with high power and toughness or something with a Propaganda-style effect. One of my favorite examples of a great Rattlesnake card is Pernicious Deed. It sits on the board and everyone knows that when they attack you, you are likely going to activate it and kill everything. This encourages your opponents to attack elsewhere.

How do I rank the cards in the Rattlesnake category that we looked at last week?

A flying creature that sometimes has lifelink has the rattlesnake element readily available.

A 5/5 creature has the rattlesnake element readily available.

While Saheeli can produce a creature to act as a deterrent with her second ability, planeswalkers tend to attract attacks more than deter them.

A creature with deathtouch who may have found a card that can hurt you during combat has the rattlesnake element readily available.

These are cards that have bigger effects. They tend to make immediate statements in the game. A card like Living Death demonstrates a strong Gorilla element! I find that many Rattlesnake cards score well in the Gorilla category by threatening their effect or simply being a large creature. If you find you are giving similar numbers in these categories don't be too surprised, but take care. Some Gorilla cards have their big effect because they are a surprise, so there is a difference.

Aethersphere Harvester: 5. A flying creature with lifelink rates medium high for me on the gorilla scale.

Cultivator's Caravan: 4. A 5/5 is handy but to score higher would involve an effect on the creature and/or bigger power and toughness.

Saheeli Rai: 4. Her second and third abilities can be big, but they don't hit every time, and aren't always impressive when they do.

Gonti, Lord of Luxury: 3. The ability to find a big effect card gives Gonti some presence in this category.

These tend to be cards that trap or surprise your opponents. Instants and cards with "enters the battlefield" effects tend to score well in this category. A card like Illusionist's Gambit scores well here. Spider cards tend to score poorly in the Rattlesnake category and vice versa, since Rattlesnake cards are evident in warning off opponents, while Spider cards are, by definition, surprises.

Aethersphere Harvester: 2. The only surprise here is whether lifelink is used, so it scores low here.

Cultivator's Caravan: 2. Tapping for mana or crewing the card offers some surprise, but still low here too.

Saheeli Rai: 4. The surprise aspect for a planeswalker is often there, with the question of which ability will be used and, in this case, what will be copied. The flexibility of planeswalkers tends to lend to a reasonable score for most in the Spider element.

Gonti, Lord of Luxury: 5. The reason to use Gonti lies in their ability to get a surprise card. While I'm reluctant to score this a six, a five seems appropriate for Gonti.

These cards are ones that get better with more opponents. I personally love Pigeon cards but a Gorilla card is generally going to be better to have, so it gets a higher multiplier. Pigeon cards that score higher are cards like Seedborn Muse and Prophet of Kruphix, so sometimes Pigeon cards do just fine!

Aethersphere Harvester: 1. Can you come up with a convoluted scenario where Aetherborn Harvester is better when there are more players? I could, so I gave it a 1. If you gave it a zero or two I wouldn't argue with you.

Cultivator's Caravan: 1. A regular creature that can just sit and play defense gets better with more players, so I'd give a plain creature a two in this category. As the Caravan needs to be crewed, I bumped it down to a 1.

Saheeli Rai: 5. Saheeli's first ability gets better with more opponents, so I scored her a five here. It could be a four, but doing only one damage makes me reluctant to score her any higher than five.

Gonti, Lord of Luxury: 5. With multiple opponents, Gonti gets more options. With one opponent, Gonti may have to choose someone whose deck is working on a different axis than Gonti. With multiple opponents, you can choose the opponent who best suits what you are looking for, perhaps someone who has the top card of their library revealed. I wouldn't score Gonti higher since the likelihood of hitting a land or dead card is still significant.

Aethersphere Harvester: 0. If you wanted to really stretch, you could say that having this on the board benefits all players since it will discourage attacks, for fear of reprisal. I don't want to twist the rating that badly.

Saheeli Rai: 1. Perhaps Saheeli is copying or finding an artifact that is a great Plankton card?

Gonti, Lord of Luxury: 1. I can picture some scenario where Gonti pulls a card that is a great Plankton card. This would be very rare.

These cards are the ones that offer repeat effects or extra resources. Cards like Blood Artist or something that regularly recurs cards from graveyards are great Cockroach cards.

I am using the multiplier that Alongi uses, but I would give Cockroach cards a higher multiplier. Cards that can be used repeatedly in multiplayer games offer a type of card advantage that is essential to winning multiplayer games. A Gorilla effect is essential, but if you get it once then it is gone, it needs to be truly amazing. Even a small Cockroach element can leave a big overall effect on a game.

Aethersphere Harvester: 4. As a permanent that can be a creature it rates between a three and a four. Add in the repeated lifelink and I put it to four. If it was a regular creature, it would probably be a five.

Cultivator's Caravan: 6. A permanent that taps for mana and can be a creature. Cockroach defines this card and makes it a solid six.

Saheeli Rai: 5. A planeswalker offers repeated effects. I would give it a six, but since virtually every planeswalker could be a six, there is little room in the rating system, so I put it at a five. If you prefer six, I won't argue.

Gonti, Lord of Luxury: 3. As a creature, Gonti gets a three or four. Since the ability is a one-time use, I set it to three.

Now you take the ratings you gave in each category, multiply it by the multiplier for that category, and add up the numbers to get an overall rating! 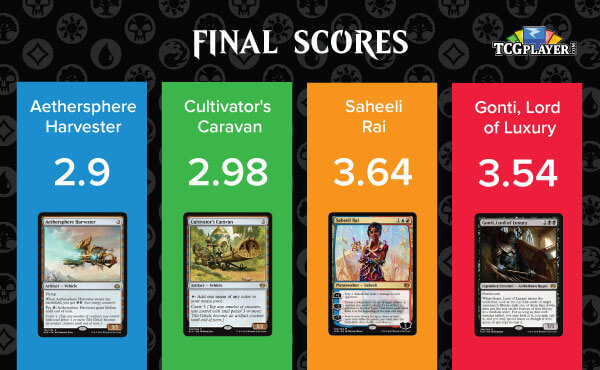 The ratings for the Animal system have plenty of flexibility to create values that make sense to you, while still considering all aspects of multiplayer games. Multiplayer Quadrant Theory offers a quick and dirty way to analyze cards on the fly, the Animal system offers a careful, measured way to look at a lot of cards and lay them out from best to worst. I hope these rating systems provide you with some interesting alternatives the next time you are looking at new cards!