After Pro Tour Eldritch Moon, I sat down with French rising star Julien Henry. You may not have heard of him yet — he was the unfortunate soul I beat in the finals of GP Manchester — but you'll hear of him soon now that he's a Silver level pro and will play in at least in the next two Pro Tours. While we were discussing the tournaments to come, he shared some of his concerns:

"I'm good at constructed, I can build decks and play, but I suck at limited. I'm gonna have to get better quickly! I'll draft nonstop until the next Pro Tour."

Drafting a lot helps improve Limited skills, but there's a conventional way of drafting… and a better way, or at least a way that works better for me.

The conventional way of drafting tells you to evaluate each card, compare them to the others in the pack and select the one that has the best score. During the release weeks, there are a lot of writers (I also took part in the review process for TCGPlayer) who write down their thoughts about every card and give ratings for every one of them. You'll also find "The List," a concept popularized by Frank Karsten that consists of all the cards in one given set in order from most first-pickable to the worst of the worst. Both are good starts to study a format and to give you ideas of cards you may have missed.

However, following those guidelines alone will not make you a good drafter. Every draft is different. The rating of each card depends on when you pick them, what you've already drafted, and what your deck needs (how much removal you have, which card fits the curve better). 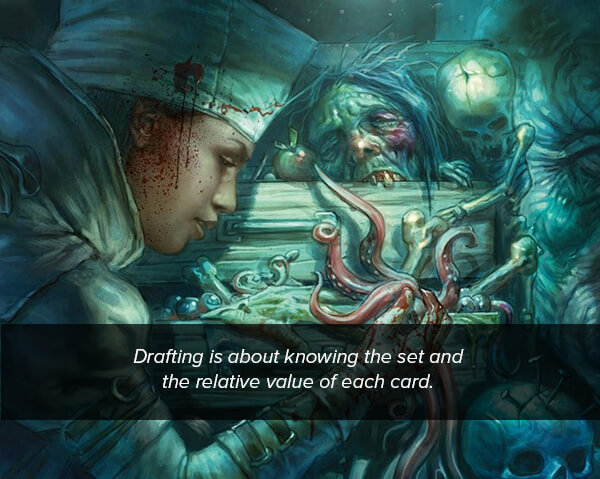 Drafting is about knowing the set and the relative value of each card. Relative as in the value it has in the deck you're drafting. If you follow the basic strategy of card ratings, you might end up with a deck that lacks synergy or with a bad curve.

I've been drafting since 1996 and played with most of the sets ever printed, and found that I have had more success with sets where most commons are playable and I could rely on opening good rares and draft around them. This is a strategy that I hope for every time I start a draft: I want to be driven by the flow of good cards in the color of the rare I opened. But that doesn't work every time. While you always want to keep that door open, you have to focus on other factors: the commons and the undervalued cards.

You need a clear idea of what you'd prefer to draft in terms of color combination and archetype and be able to fall back on your feet if you're being cut or if the cards just don't come (or if you open a good rare in a combination that isn't in your top choice). There's a much smaller chance that your deck doesn't come together if you know the relative value of the commons and underrated cards, because you'll have access to a lot more of them.

Trying out cards that don't look good is a long process. At the testing house in Sydney before Pro Tour Eldritch Moon, you have no idea how many Bold Impalers I drafted over the dozens of drafts we played. It's all about thinking outside the box and trying combinations no one else is willing to draft. The others questioned my sanity, calling my brews "Levy decks."

In our testing, I had a couple of decks that showed potential. One featured multiple Waxing Moon. I managed to draft a total of 12 Werewolves along with the green instant, which was quite a record, and frankly, not something you'll get every time.

But let's say you open Ulrich of the Krallenhorde and have access to a lot of Werewolves. Waxing Moon will be good in that deck. Drafting common strategies helps you figure out how to make the best of rares you can open.

Now take a look at this deck. 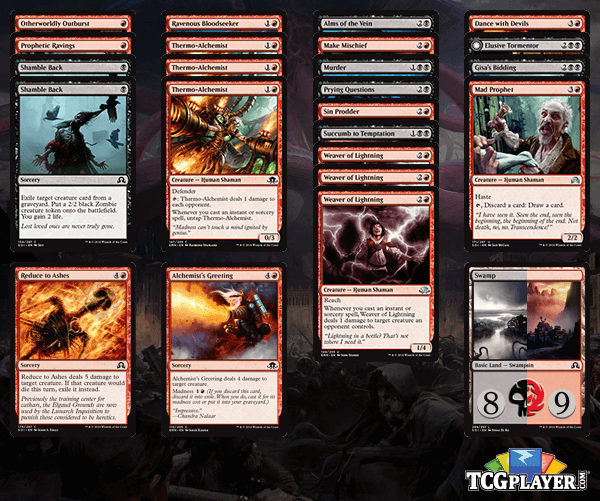 How many of these cards are playable? In other words, how many 12th-14th picks do you see in this picture? 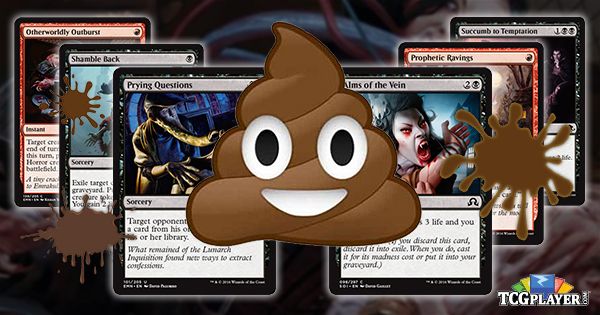 The deck featured three Thermo-Alchemist and three Weaver of Lightning. The rest was just spells: removal, direct damage, and creature-generating cards. I didn't aim to draft this deck, but when I got the second and third Weaver of Lightning, it made sense. Blue wasn't available and there weren't enough red spells coming my way so I had to go black.

All the 12th-14th picks played great, as I needed cheap spells to fuel both Thermo-Alchemist and Weaver of Lightning. Shamble Back was surprisingly good as a one-mana spell that provided a blocker to buy some time. Prophetic Ravings is pretty good on a Thermo-Alchemist.

The problem with the B/R Spells deck is that it relied on strong commons and uncommons. The deck would not have worked if I didn't have three Weaver of Lightning and three Thermo-Alchemist, but once that happens, are you going to pick a random black creature over a Shamble Back just because Shamble Back is one of the worst cards of the set?

It's not a deck I would recommend drafting. It was a good one (I 3-0'ed without a sweat, winning games without even having to attack) that I had a lot of fun playing with (who DOESN'T like to win with last picks?) but it's too hard to put together.

Pracitce drafts are about learning as much as you can from your errors. There's no way I would have thought every card of this deck above was good (in a specific setting) had I not tried them together. Try weird combinations and draft rares as often as you can, not to just "rare draft," but to try them out.

I don't think there's a worse feeling at a draft table than opening a rare that you've never tried but think might be good. You have a safe pick that you know is good alongside this rare — you heard It was good, but honestly, you don't know how good it is compared to the safe pick. Sometimes you take it because you don't want to pass a potentially broken rare to your neighbor and it ends up being unexciting. Sometimes you take the safe pick and realize the rare is a bomb and regret it for the rest of your life.

When I heard about about Scott Lipp's strategy at GP Sydney, I was over the moon. A common picked high that no one wants? That's a strategy I can get behind. I proceeded to force white aggro archetypes with Lunarch Mantle for a few days after the Grand Prix with amazing results. His strategy was brilliant, and I couldn't believe I had missed it. Just draft any random 7-10th pick white dorks in white, fill it out with any second colour (green if possible), add 16-17 lands, and you have a winning deck.

If you manage to draft almost the same deck three, four (or more) times in a row with a different crowd and have a positive record with a couple of 3-0's, you've found something. I Insist on the "different crowd" clause because if you try the same strategy with the same people, they will either stay away from your colours and you'll have more cards available than you would normally do, or they will cut you on purpose, and you won't see as many cards as you would normally do. Either way, it's bad for your results. It also keeps the other players at your draft from trying your strategy and you from having feedback. "Inbred" draft (drafts with the same crowd) is a big cause of failure at the PT if players stick to their favourite colour combinations and never let you draft new things. That's why I enjoy spending a few hours drafting online before Pro Tours to make sure my strategies work in a different environment and to try the archetypes I haven't tried yet.

At the Pro Tour, I wanted to draft W/G Mantle, but in my first draft, I opened Distended Mindbender and Choking Restraints. I took the whole 45 seconds to make my decision and went for the rare. I had tried Distended Mindbender in practice drafts and it was insane. I ended up with a decent B/G Emerge deck that I was satisfied with, even though it's not what I was hoping for (and went 2-1 with it). For the second draft, everything went according to plan and I even opened rares in my colors: 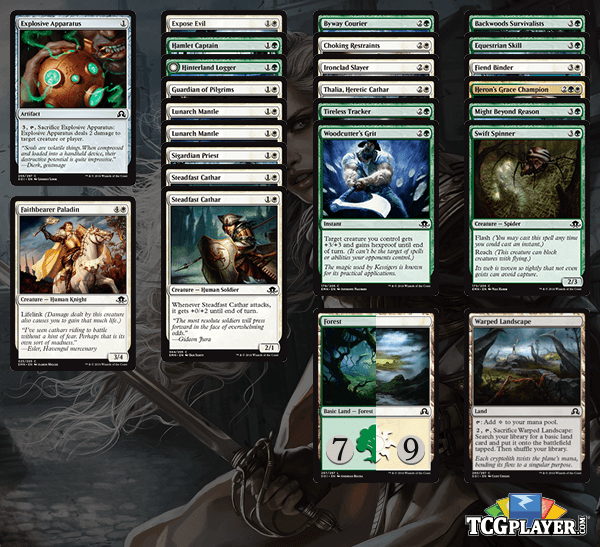 I went 2-1 with that deck but felt a lot more confident after the draft than with my first deck.