Innistrad: Midnight Hunt is on our doorstep! We do know a few cards that have already been spoiled, but the majority of the set is unknown, as of the time I'm writing this article. What we do have is a combination of hints about the set's contents from Mark Rosewater, and the knowledge of what types of cards an Innistrad set is likely to provide. My goal is to piece together the known knowledge to make some educated guesses about what we will see in the set, and which cards to be on the lookout for to help make Standard a healthy format.

Before we get into predictions though, let's take a look at some standouts that have already been spoiled. 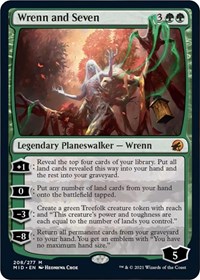 I laughed along with everyone else when I saw the name of product-hover id="246018". I like the concept of having a series of Wrenn planeswalkers, and this series of Dryads seems like a big hit already. Wrenn and Six was of course an incredibly powerful card, seeing a ton of play in Modern and even in older formats as well. I don't think Wrenn and Seven is as good as Wrenn and Six, but that's not necessarily a bad thing, as we are looking for a card that can be good in Standard. Making a large creatures with reach, or grabbing some card advantage by searching for land is pretty nice value. I would say this one is well designed. 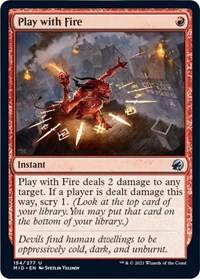 product-hover id="246017" will be a Standard staple. Bonecrusher Giant is rotating out, and Shock has seen its fair share of Standard usage. Adding a scry to Shock just makes it straight up a better card. For red decks looking for a burn spell, this seems like a very good option. 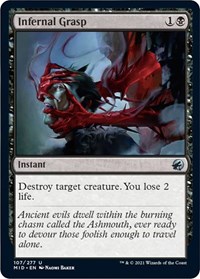 Another card we can directly compare to other cards, like Doom Blade or Terror for instance. We aren't going to get straight-up Terminate in Standard again, but losing 2 life is a reasonable cost to pay for killing any opposing creature. This card should definitely see play in Standard, and in formats like Cube and Commander as well. 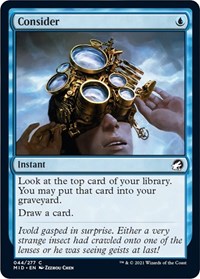 product-hover id="246015" is the new Opt: a very good one-mana cantrip that will see play far beyond Standard, and into Modern, Historic, and potentially Legacy. This is a better card than Opt in any deck that wants to fill up its graveyard, and that's a lot of decks. Think about a deck like Izzet Phoenix for example, and how perfect Consider will be for that deck. Of the cards we've seen so far, I expect Consider to see the most play. 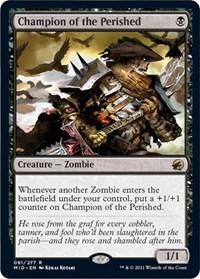 It looks like there will be a Zombie theme in Midnight Hunt, as you don't see cards like product-hover id="246013" without other Zombies to go alongside it. Remember there was a time when Mono-Black Zombies was the best deck in Standard. Over the past couple years, the tribe hasn't made too many waves, but Champion of the Perished is a good enough card to help the tribe out in a big way. This one-drop can quickly grow into a very formidable threat, assuming you have a ton of Zombies to trigger it. 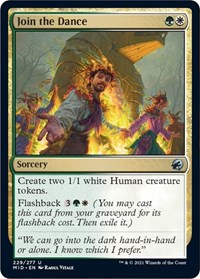 The key here is we know flashback is coming back, which did seem very likely to be the case anyway. This is also a perfectly good card in a Selesnya tokens deck, as we have seen cards like Raise the Alarm and Dragon Fodder succeed in Standard before, and product-hover id="246020" is an upgrade to those.

Taking a look at the cards already spoiled is important for predicting the future. This grouping of cards is a very strong one. There aren't many spoiled cards at the moment, but seemingly they all could be good enough for Constructed play, which is a bit unusual. It could be that the goal is to preview the best cards first, or it could be that there are just a lot of really sweet and cool cards in Innistrad: Midnight Hunt, which is my suspicion. Still, these cards aren't necessarily too good, but they are upgrades to cards we already use. Shock and Opt just got replaced.

We have gotten a hint that three of the mechanics already seen in Innistrad will be making a return again for Innistrad: Midnight Hunt. This isn't to say there won't be any new mechanics, but we can make educated guesses about what some will be. Flashback we already know, and it is perhaps the most important one.

Flashback cards generally see a decent amount of play. Being able to use a card twice in a game is simply really strong, especially on cards that could be good enough to play even if they didn't have flashback. Let's take a look at a card I suspect gets reprinted: Ancient Grudge. We already are aware based off what Mark Rosewater has said that a popular tournament card is going to be reprinted, and that could be referring to Ancient Grudge. Being able to destroy two artifacts with one cheap removal spell has always been very strong against artifact-based decks. I will be paying close attention to which cards they decide to give flashback.

I also suspect we will see transform make a comeback. Double-faced cards seem to be popular with players, and transform (being able to change into another card after already being in play) is a cool ability. It seems a given that there will be Werewolves in Midnight Hunt, and transform fits that creature type thematically.

The other returning mechanic could possibly be morbid. If Zombies are indeed going to be a supported tribe in Midnight Hunt, having a strong mechanic that is black based could make sense.

Another one that I think could be fun to see again is the Curses. Being able to put an enchantment on an opposing player is definitely interesting, though Curses haven't got as much usage as people thought they might. We know that creatures can transform into Curses, like Accursed Witch, but we could end up seeing the reverse, as in a Curse that can become a creature.

Other possible mechanics? These seem less likely as we know there will only be three returning mechanics, but fateful hour, miracle, soulbond, undying, delirium, investigate, and skulk are all possible.

Past in Flames and Snapcaster Mage These are long shots because of how powerful they are, especially in the case of Snapcaster Mage, because it is such a generically good card. I would be surprised if Wizards wants to put Snapcaster Mage back in Standard, but these are the type of powerful cards related to flashback that definitely would create a buzz if reprinted. Will we see Ghost Quarter come back? Having some type of land disruption in Standard definitely makes building mana bases more complicated. This could fill a hole left by Field of Ruin. Standard is desperately in need of some new lands that produce two colors, as this next rotation will wipe out a lot of the good mana fixing. In order to build consistent two-color decks we need better lands, and three-color decks will likely still be a rarity in the new format even with a new cycle of dual lands.

The question is will we see completely new lands or the return of a cycle we have seen before. We could see lands like Port Town and Choked Estuary from Shadows Over Innistrad, or we could go back to original Innistrad for check lands like Sulfur Falls and Hinterland Harbor. The check lands were reprinted in Dominaria, so that may influence whether WotC is ready to go back to those again.

We will definitely see some emphasis being put on tribal synergies. If there is one thing I want to see in Standard, it's a tribal creature deck that's good enough to be a top-tier strategy. It's been a while since this was the case. Let's take a look at some tribes we could see a lot of again.

Zombies: This one is basically confirmed by Champion of the Perished, and if Midnight Hunt is anything like Shadows Over Innistrad we will see a lot of Zombies.

Humans: We often see tribes divided up based on color, and I fully expect to see plenty of Humans in white. Cards like Champion of the Parish and Thalia's Lieutenant are from Innistrad, and we should see this trend continue. I wouldn't be surprised to see a staple Human reprinted like Thalia's Lieutenant to give this strategy a boost.

Werewolves: Red and green make a lot of sense for Werewolves, and cards that transform.

Ooze? While other tribes are likely in Midnight Hunt, I'm skeptical that WotC will commit to making any of them playable in Standard. Oozes are a well loved tribe, but it's rare we see a lot of them printed at the same time. There have been hints that we could see Oozes in Innistrad though.

Interpreting Other Hints from Mark Rosewater

A new drawback for creature tokens that lets us create them cheaper: We already know about a Selesnya card that makes tokens. We also get the indication there may be a way to generate tokens more effectively than we have seen previously. This gives us a strong signal that Selesnya Tokens may be a very real competitive deck.

A white card that could potentially draw you a card each turn: Is this a push to make white decks better? We rarely see white card draw, so I'm guessing this card refers to a rare or mythic.

A mythic cycle with "you may pay [COST] any number of times": A key point here is there will be a new cycle of mythics, which is quite exciting. It sounds like there will also be decision making involved when playing with these, so this is something to be on the lookout for.

A four-mana blue Aura with "You control enchanted creature": I don't believe we will see a card as good as Control Magic again, so my suspicion is there is some drawback here. Mind Control effects are very powerful, and if this card is basically Control Magic that would be very good.

Some of this article may be quickly invalidated as previews are going to be coming out quickly, but that's awesome. I love that we have some information to work with based off of what Mark Rosewater has tweeted, as well as storylines from the last Innistrad sets. With Innistrad: Midnight Hunt I expect a lot of familiar elements from previous sets, and I'm hoping that includes dedicated creature tribal decks. Also, we need good lands to play with in Standard, so let's see what we get.