As a casual player, you might expect that I'd be excited about Kaladesh. You'd be right! Who doesn't get excited about new cards and all the new opportunities those cards afford? New decks and updates to old standbys are wonderful things!

Imagine buying a car. You can buy a new car and pay the premium that comes with a new car purchase, or buy the used car. That "new to you" car has proven that it isn't a lemon and runs just as well as the new car. The downside of the used car is that it is worn down and the life of the vehicle is shorter.

What if you could buy a car at the used car price, with none of the wear and tear? This is what the Standard rotation is like for me. The cards are eligible for casual play no matter what! Kaladesh entering the Standard format means Dragons of Tarkir and Magic Origins are now out. Losing that eligibility has generally meant that prices for cards in those sets, like a new car driving off the lot, drop. This means that cost conscious casual players should have a host of cards that are just a little cheaper than they were before, with none of the used car downside!

Now, I know that a finance guy would tell you that this isn't true for every card, and many cards achieve "bulk" rare status before their Standard run ends so you don't have to wait until the set rotates.

For someone like me who isn't particularly interested in watching individual card prices, waiting for Standard rotation is advice that is generally correct and easy for someone as lazy as me to follow! Remember, as a casual player, time is on my side. The cards don't get worse if I wait 18 months. I don't need the cards right away, and if waiting those few months means I save some money then I'll continue to play with the cards I already have until the cards rotate out of Standard and drop in price.

I've picked out a few cards that fit the bill for me. These were cards I was excited about when Dragons of Tarkir and Magic Origins came out, but decided to wait until the prices came down a bit before biting the bullet. 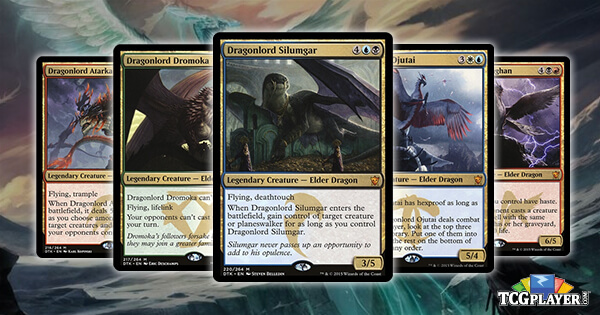 Not every Dragonlord is for every player, but I'm betting at least one of them is interesting to you. I have a copy of Silumgar in my Lazav, Dimir Mastermind deck and it has been great. Stealing a creature then playing some amazing deathtouching defense has made Silumgar a clutch performer in the deck. Personally, I like Dragonlord Atarka the best. An 8/8 with "flample" (flying and trample) that can the destroy creatures that could limit the amount of damage it deals is a wonderful thing. Whether Atarka is your commander or not, not many creatures bring the beating that Atarka brings. I've also had a Dragonstorm deck together for years, and the dragonlords can add new blood to the deck and make things even more miserable for my opponents. Karrthus, Tyrant of Jund would love Dragonlord Kolaghan and Atarka as new friends!

Maybe Risen Executioner isn't for everyone, but I have a love for zombie decks and this fellow does a great job. I'm also tempted to try it in a Zombie Token deck that runs almost no creature cards, mostly as a way to recast it for the same price again and again. The Executioner provides enough options for deck builders that getting a play set is something I'm interested in.

Mass removal in black is unlikely to Languish in my collection unused, so I've been looking forward to picking this one up. I'm particularly excited for Languish since I have a couple of decks that appreciate getting to keep their stronger five-toughness creatures. In addition to mass removal, Languish can also work well as a post-combat trick, taking down especially big creatures.

When I first saw this card I thought how great it will be in my Vorel of the Hull Clade Commander deck. With so many ways to add a token or double counters on a permanent, Hangarback Walker could produce a ridiculous number of thopters. It would fit anywhere on the mana curve, and be a constant threat to opponents!

Then the Pro Tour came along and the price shot through the roof and stayed there. Now with it also appearing as a Masterpiece in Kaladesh, you can be sure I'll be picking this up with my next order. I don't think Hangarback Walker is an auto-include for every deck, but when it fits in a deck it is just amazing. I've had it played against me in two different decks and it goes off just as I hoped it would.

I tend to be very careful about putting tutors into my decks. I like variety in my decks and tutors tend to encourage a linear play that involves the same card(s) again and again. However, a card like Dark Petition has some fun built right in. Not only are you getting the card, but if the Spell Mastery provisions are present, you'll get three black mana to make it happen. The card combines Demonic Tutor and Dark Ritual? Okay, I have to at least try it!

I have a couple of black decks that have a toolbox of cards I'm usually looking for, so I'll be trying it in there. If I find that I'm just searching for the same cards again and again, I may opt to move on.

Waiting for the Standard rotation lets me tithe in comparison to those who purchased at the Archangel's peak. In addition to the quasi-Propaganda effect, creatures can't block when the angel attacks unless they pay per blocking creature. I loved this card the moment I saw it spoiled, but the price was just too much. With the price falling, things are looking up for me and my other creatures as the Archangel of Tithes leads the attacks.

I can see Archangel of Tithes in an Odric, Lunarch Marshal deck; the Archangel's weakness is probably the lack of vigilance, and Odric will help out with that better than other commanders could. Serra's Blessing helps things along as well. Even Brago, King Eternal could bounce the Archangel back to untapped status. I'm sure you can work out plenty of ways in your decks to make the Archangel work double duty for you. 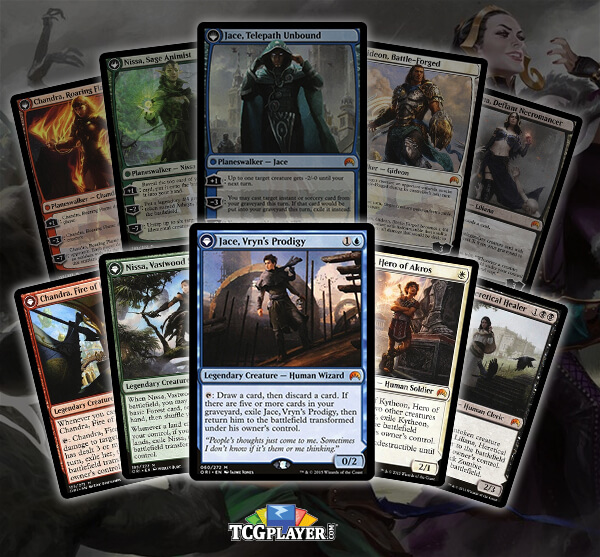 Each of the Origins Planeswalkers started out pretty expensive. While I haven't had any experience with Chandra or Kytheon, both look promising as parts of various decks. I was lucky and pulled three (!) prerelease packs with Jace as the promo card! I also opened a Liliana as well and worked with my friend Daryl to build a deck that took full advantage of everything she can do. That deck hasn't gotten any worse with rotation, but it has become a bit more cost effective. I bit the bullet and bought Nissa since I had a deck that was perfectly suited for her to take the helm. That deck helped me to a few wins and epic plays while attending Gencon and Pax East, and got me a feature with CMDRDecks.

The deck offers a ton of ramp and is in desperate need of updating; Burgeoning and Concordant Crossroads (thanks to Jimmy and Josh for the suggestion) are just a start. The deck also can be frighteningly explosive with The Great Aurora and The Chain Veil both doing special things!

I recommend considering Jace, Liliana, and Nissa. Each offers something special and in the right deck, they can really make things hum.

I think this is a great card for Commander and most multiplayer formats. Finding someone to attack usually isn't too difficult and getting extra land when you do is excellent mana ramp. It is an artifact that can go into any deck you have that uses creatures to attack, so it should work in most decks — I even have a Boros deck that struggled with mana until Sword of the Animist showed up! I have never seen anyone unhappy to be running this sword in their decks, and when the single copy I have makes appearances in my deck it is practically always good news.

Standard rotation is more than just a way to pick up some cards on the cheap. This is also a chance to get a second look at cards you may have missed the first time around. These are cards that may have hit your playgroup and are now being forgotten. You've had the chance to see them in action as a one-of in one of your decks, or watched them perform in your friends' decks. These are cards that will give your deck that surprise factor it has been lacking since your last update that was probably too long ago.

And while the Standard rotation used to be once a year, the joy is that it now happens every six months! Every six months, two more sets of cards get more affordable for the casual players everywhere! Every six months these "new to you" cards that have had a chance to prove themselves in your decks and for less than the new card cost! I'm sure you have a handful of other cards you could find in Dragons of Tarkir and Magic Origins that will work for you!