Welcome back everyone! I had a fantastic Father's Day and my token from winning the SCG Invitational was finally revealed. It's the best one yet, if I do say so myself. I'll let you decide for yourself though! 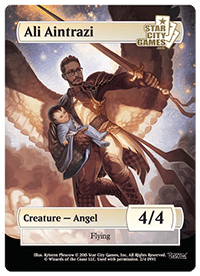 I knew it was going to be pretty sweet regardless, but I didn't know they were actually going to give Aiden (my son) facial recognition. I had requested him to be in the token, but I thought it was just going to be a generic baby swaddled in my arm, lying beside me, or me holding it in some way. But when I saw that it was actually Aiden, I was pretty stoked. Not only is it a sweet token, it also has a ton of sentimental value to me. I couldn't have asked for anything else really. Well...I take that back; I'd like a foil version! That would've made it sweeter! I was going to write a Modern or Legacy article with Geist of Saint Traft, Entreat the Angels, or Sigil of the Empty Throne to commemorate this token, but I'm gonna hold off for now. Trust me, I really want to write a miracles article, but I want to get better with the deck and have a solid list before I do that. I also happen to have some very sweet standard decks for you guys. Two in fact, and I feel like one is more refined while the other is very powerful and has some sweet interactions, but could use a little work.

I ran into Trevor at the Invitational and he was playing a sweet deck that he had played previously in a qualifier and finished in first place. Usually you can tell what your opponent is on or have some general aspect of what they're playing based on the lands they play and what spells they cast. Well...when he played Temple of Enlightenment on turn one I figured he was UW/x Heroic or Esper Dragons. But then he played an Opulent Palace and I got all sorts of confused.

Throughout that game he just kept jamming haymaker after haymaker while beating me down with the Deathmist Raptor and Den Protector Engine. I lost that game and had no idea what was going on and became very sad when my Dragonlord Dromoka got stolen by Dragonlord Silumgar. See, one of the reasons Naya Dragons was so powerful was because nobody had seen it before, and an unexpected Xenagos, God of Revels resolves people tend to hold up some removal or a Counterspell for the next turn so they don't get bashed by a Whisperwood Elemental or the such, only to have their dreams flattened when you played a Dragonlord Dromoka and attack for a 20 point life swing that they can't do anything about.

Well that game I felt like I was the one being juked instead doing the juking, and that's huge in a match of Magic. Trevor Eckoff was very friendly and we both had fun in our match. Afterwards he gave me his deck list so that I could share it with you guys and gals. Without further ado!

This deck can do some very powerful things and can catch your opponents off guard, which I'm always looking to do if possible. When you have a strong deck that people aren't too familiar with, you're going to win a lot of games from sheer power of the deck and also the unknown factor, since they don't know what you're playing or how to really board against you.

I've really enjoyed playing and testing this deck, especially since decks like this usually fold to monored aggro or other similar strategies. Except this one doesn't. Fleecemane Lion, Courser of Kruphix, Deathmist Raptor, Siege Rhino, and Dromoka's Command help a lot against those types of matchups. Satyr Wayfinder isn't really anything to scoff at either. He can find you a land then trade with a Foundry Street Denizen or gain you some amount of life. Speaking of Satyr Wayfinder, I really think that card is extremely powerful. It's okay in this deck, but I don't feel like we take the full use out of it, especially with no Haven of the Spirit Dragon and no delve spells main deck. In the most recent version that I'm testing I've cut one Abzan Charm, one Hero's Downfall, and a Courser of Kruphix for one Treasure Cruise, one Haven of the Spirit Dragon, and another Satyr Wayfinder. It's been doing pretty well and rebuying the Treasure Cruise with Den Protector is a very real thing. I want to play more delve spells and possibly the full set of Wayfinders, but I didn't want to change the deck too much. I wanted to present you the deck that I'd been presented with before making significant changes so that you can start off with what I started off with. I won a ton of matches with the original list that Trevor sent me, so I didn't want to stray too far off the original path just yet.

The sideboard is very good and allows you to transform your deck after game one to be better suited against any of the current standard decks. You have a wide array of options since you are playing four colors. One card that I kept wanting to test out but didn't get around to it was Ojutai's Command. It's a pretty powerful spell that just gets stronger the more two-drops you're playing. And I personally felt like a full set off Fleecemane Lion was enough to warrant its inclusion in the sideboard. It also gives you something else to do against control decks by drawing a card and zombifying a Fleecemane Lion or Den Protector at instant speed. Soon maybe we can Ojutai's Command for the new two mana Jace; that's going to be exciting!

I highly recommend you test this deck if you want something new to play at your next tournament. It does very powerful things without playing cards that are too mana intensive and that says a lot. So give it a go!

Another list I'd like to talk about also plays the Den Protector and Deathmist Raptor package. I know, I know, you're probably tired of seeing those two cards together or just hearing about them. Well, what if I told you that you want to see this list. Not because of the previous mentioned cards, but because of another card. I'm pretty sure we all love playing with: Prophet of Kruphix.

BAM! And you thought Mastery of the Unseen was a powerful card. Well wait until you see it paired with Prophet of Kruphix, you can really start abusing Mastery of the Unseen then. When an opponent taps out it's nice to just slam this card down and have all your mana untap. We all know that free/reduced spells in Magic are extremely powerful, and most of the time ban-worthy. (See: Treasure Cruise, Dig Through Time, Mental Misstep, Force of Will, any storm card, Cascade, etc.) While this card isn't on the same power level as those cards, it's still extremely powerful when it goes unanswered. Even if just for a turn or two. It basically makes all your spells free while it's alive, and like I said, we all know how powerful free spells can be. Sometimes they'll try to kill Prophet of Kruphix on their turn and you can just flash in a Dragonlord Ojutai, another Prophet of Kruphix, or even a morphed Den Protector to pick the prophet back up or a better card. And once you get Mastery of the Unseen out you can start manifesting on your turn and your opponent's turn. You can also protect the Prophet with a timely Valorous Stance and if you can follow that up with anything, it's most likely lights out for your opponent. Flashing in a Fleecemane Lion at your opponent's end of turn then monstrous'ing it on your turn just to have everything untap again is extremely good.

Playing this deck I really wanted to play more Counterspells or maybe Stratus Dancers, at least in the board, to make it more tempo-like. I understand what Nykthos is for and it allows you to go pretty wild with Mastery of the Unseen, but I'm not sure that it's needed. I'm not too thrilled about playing three colorless lands in the deck either. I had another list that I tried that focused strictly on Prophet of Kruphix and Mastery of the Unseen, playing four of each, 12 mana guys, and Whisperwood Elemental. It was okay, but man can that be mind-numbing after a while and an Anger of the Gods or Drown in Sorrow can still hurt you, even if you have four manifests out. I ended up not liking it too much and felt like I had strayed too far.

Don't get me wrong, in no way do I think this deck is completely finished and finely tuned, but it's a very strong shell that can go many different ways. You can also thank Andy Manthei for the original list. I asked for it after getting my butt handed to me on Magic Online. I don't mind losing, and I especially don't mind losing to a sweet deck, and that's exactly what this deck is.

For those wondering, this is what I had transformed the deck into, but I wasn't really happy with the final result.

The deck was initially doing very well but it seemed like it was missing something. It might've been right to just go the old fashioned way and not play Dragonlord Ojutai, but instead play things like Polukranos, World Eater, Genesis Hydra, and possibly even Hornet Queen; basically what the GR Devotion decks are playing. I decided to play a singleton Nylea and Colossus of Akros to close out games. Also Colossus of Akros may look goofy, but against some opponent's it's very hard to beat. Not even Ugin can kill it and it will end a game very fast. It also plays well with Mastery of the Unseen which is why I gave it the nod over Ugin, the Spirit Dragon maindeck. Ephara, God of the Polis is pretty decent on its own and makes your mana guys not dead draws late game, but it turns into an insane draw engine with Mastery of the Unseen and don't get me started with Prophet of Kruphix.

Again I liked this version of the deck, but felt like it needed something, not sure what though. I'll be testing more standard decks for an upcoming Standard tournament and hopefully I can get back to you next week with a finely tuned deck.

Thank you very much for reading and happy belated Father's Day to all the fathers and single mothers out there.

Follow me on twitter @Alieldrazi
Follow me on Twitch and watch me stream: Twitch.tv/Alieldrazi
Also make sure to check out Freshly Brewed, the best podcast in all the multiverse! Where we discuss everything Magic and then some!