Ever since Zendikar was first introduced, the set (or rather, the plane) has been all about the lands. Creature lands, utility lands, fetch lands...the blocks have basically had every kind of land you could think of.

When Battle for Zendikar cards were being spoiled, we happened to get a pretty good one in the form of Shambling Vent. Shambling Vent went on to be a card that found a home as a four-of in most Standard decks that were running both black and white; those decks needed color fixing to begin with, let alone the bonus utility of an extra life gaining threat that could easily hide away in their manabase!

Today we have something...similar, to say the least. I'm not going to provide too much build up; I just want to introduce our card, then follow up with some analysis of where it might fit best in regards to other competing options in both Standard and Modern.

Magic players have been waiting for a cycle of enemy creature lands for quite some time. Since at least the original Worldwake, when the cycle of allied creature lands first appeared. We saw two lands from this highly-desired cycle in battle for Zendikar, and we all knew that we would find the remaining three in Oath of the Gatewatch.

We're proud to present one of those three today: Hissing Quagmire! 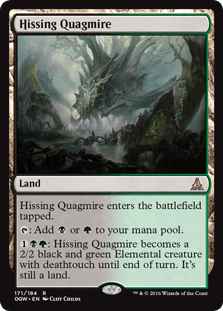 One of the things I typically mention quite often is my fondness for enemy-color combinations: B/G, B/W, U/G, etc. Further elaborating that Sultai is my favorite clan, and you can imagine how this land was basically perfect for me!

I want to take a look at the three clan/shard combinations that contain black and green, and where Hissing Quagmire might fall in each.

Abzan has a tremendous amount of popularity in Standard right now, but the archetype is also a Modern staple as well. Originally the clan only had one creature land in the form of Stirring Wildwood, which never saw that much play in the deck. The creature land that they often deferred to was Treetop Village, but we're only looking at the dual-colored creature lands here. That being the case, we definitely think Hissing Quagmire will be preferred over Stirring Wildwood, but Shambling Vent with its lifelink might still trump it. All in all, I definitely think the Hissing Quagmire will show up in both Modern and Standard versions of Abzan making it the second best choice for our dual-colored creature land needs.

Sultai is less popular than Abzan, but still shows up from time to time. It's extremely hard to compete with Creeping Tar Pit as three unblockable power is hard to beat, especially when its activation cost is on part with the cheapest of activation costs at three mana. Nevertheless, our other options is Lumbering Falls, and I think Hissing Quagmire will come out ahead here. While the hexproof on Lumbering Falls is great, the fact that the Hissing Quagmire can act as removal for three mana is pretty beneficial and can't be overlooked. If we put Raging Ravine or Celestial Colonnade, the two gold standards of dual-colored creature lands, up against either Lumbering Falls or Hissing Quagmire, only one of the latter two lands will come out ahead...or rather equally.

Jund is most heavily played in Modern where the other two creature lands are far on the ends of the spectrum; Raging Ravine is fantastic nd almost always played as a four-of, while Lavaclaw Reaches sees little play. I think, once again, that Hissing Quagmire falls in between the two. It won't take over for Raging Ravine, which is an incredibly potent clock on its own, but I would be much more eager to play it where I would decline adding Lavaclaw Reaches.

This is the very definition of a great utility card for me. Hissing Quagmire doesn't take over for some of the other options, but it can find a home in multiple decks, and you're never upset at having more creature land options. Just like Shambling Vent before it, I expect certain decks that can do so to be running the full set of four Hissing Quagmire. While I don't know if it will straight up replace Shambling Vent in Standard's Abzan list, I do think having access to creature lands five through eight will be a huge boon for the deck, granting it one more versatile card in its ever-growing arsenal.