This is the first time I have ever had insider information on the release of a new set. I have been one of the few people in the world that has known about the reprinting of Serum Visions. Even though I've only known about it for a little less than a week, I am happy to share this exciting news with the world, as I have been itching to talk about how big a deal this reprinting is. When Modern Masters and Modern Masters 2015 were released, I was left wondering why Serum Visions didn't get reprinted. It seems Wizards had a different idea in mind as finally, with Conspiracy: Take the Crown, this powerful one mana card-draw effect is finally more available to the community at large. 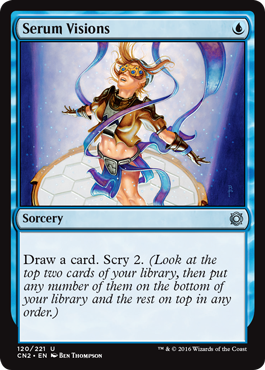 Conspiracy is a unique series of sets containing both reprints and brand-new cards. The initial inspiration for Conspiracy was to enhance multiplayer formats, specifically Limited. However, Conspiracy sets have now grown into much more than that. Now, cards reprinted in Conspiracy actually have a significant impact on tournament Magic as well. This is basically the best of both worlds, as the set aims to have something for everyone whether it be casual, competitive, or multiplayer Magic players.

Let's take a look at Serum Visions, a playable card in a wide variety of formats. Since I primarily play Modern and Standard, I immediately classify Serum Visions as a Modern staple. There have been players who have claimed Serum Visions should be banned from Modern — that is how powerful the card is. Looking back to before the Splinter Twin and Summer Bloom bannings, Serum Visions was being played in over the half the decks in the Modern format. Currently blue decks see a little less play, but Serum Visions is still a four-of in most blue decks in Modern. It is smart to reprint Serum Visions as an uncommon as it really was too powerful as a common when originally printed back in Fifth Dawn.

So what makes Serum Visions such a powerful card? First of all, traditionally card draw is more powerful the cheaper the card is to cast. The best card-draw spells of all time cost only a single blue mana, and Serum Visions is on that short list. Over time, Wizards has gradually decreased the power level of these card-draw effects, since they have always been a bit overpowered. Looking at the predecessors to Serum Visions, we see Ancestral Recall, and then Brainstorm. Those cards are busted, huge players in Eternal formats. Since Serum Visions is not as powerful as Brainstorm, it does not see a ton of play in Legacy or Vintage.

When comparing Serum Visions to blue card-draw effects in Standard like Take Inventory, Fortune's Favor, and Dragonlord's Prerogative, once again we see that it costs more mana to draw cards nowadays. These cards take some work in order to make them work in Standard; it isn't a good idea to stick one of these in any deck that plays blue in Standard, yet they are playable cards given the right circumstances. Serum Visions, on the other hand, requires very little in order to make it work.

It can be argued that Serum Visions is best suited in a combo deck, though it also sees play in midrange and control strategies too. Pro Tours have been won with Serum Visions, most recently Antonio Del Moral Leon winning with Splinter Twin comes to mind.

It is hard to actually equate how much a single scry is worth but I think that estimate is fairly accurate. Serum Visions is not quite as powerful as drawing two cards for one mana, yet in some situations you would rather scry two than draw an additional card. This is often true for decks that are digging looking for just one or two specific combo pieces.

Currently combo decks in Modern aren't quite as popular as they once were, but there are still some good ones which continue to do well. Let's take a look at one of the current most popular combo decks which also plays four copies of our namesake card:

Ad Nauseum is essentially a two-card combo deck, but without having an Ad Nauseum and a way to prevent yourself from losing the game there really isn't a way to win. The deck absolutely needs to find its combo cards and do so in a timely matter. This is where Serum Visions comes in. In a deck like this Serum Visions isn't an actual combo piece itself, but it digs you three cards deeper into your deck which is super important. It is also nice when scrying if you already have the necessary combo piece, you can always scry a redundant combo piece to the bottom. In order to fully illustrate just how much this deck wants scry, there is no deck in Modern that plays close to this many temples, but the Ad Nauseum deck wants to scry bad enough to warrant playing a whopping eight temples!

This list is a pretty straightforward version of Grixis Delver. There are only 11 creatures, and they are all high-impact cards that work well with all of the cantrips, removal, and counters. I consider Serum Visions to be a cantrip because it does replace itself with another card, and create some additional value. Almost any deck in Modern which has a high density of noncreature spells, and is blue should want to play Serum Visions. The card seems like a role player because you don't say "Serum Visions won the game" but it is a super important piece of the puzzle in these types of decks. Without Serum Visions I'm not entirely sure Modern Delver decks would exist to be honest.

This is one of those cards that isn't flashy but fits into a wide variety of archetypes because of how versatile and universal the effect of drawing cards is. While Serum Visions can't be considered card advantage in the strictest sense, as it doesn't actually net any additional cards, it helps enable the most important cards in a given archetype, or the key features of a deck. There are many more archetypes in Modern that play Serum Visions, Jeskai Control, Storm, and Scapeshift come to mind, and I expect the card to be a format staple for years to come. By reprinting Serum Visions I believe Wizards is less likely to ban it in Modern. It is a powerful card, much too good to see Standard play, and I believe Modern is the perfect fit for the card.

At its roots, Conspiracy is a multiplayer-oriented set, and while I don't play multiplayer magic too often I can see why it will work in these types of games as well. While I wouldn't say Serum Visions is more oriented towards multiplayer than two-person Magic, the effect is so universal that it can be applied to just about any deck. When I am playing blue in Limited, Serum Visions will always make the deck no matter what. There are so many crazy decks and cards in multiplayer Constructed formats that Serum Visions should see play in a wide variety of decks there as well. Overall the reprinting of Serum Visions will affect a large portion of the Magic community, and strikes me as one of the most influential cards in Conspiracy: Take the Crown previewed so far.