What Is Pauper Pokémon?

Pauper Pokémon is an unofficial "Unlimited" format for playing the Pokémon Trading Card Game that allows any card with a Common or Uncommon rarity printing. Following Pokémon Trading Card Game Online's (PTGCO) format standards, legal card sets include all the Black & White Series to present. In some circles, you may hear you can't use Special Energies, and in others there may be ban lists of specific cards.

While you can't currently play this format online, or during official Play! Pokémon Events to qualify for Regional or National competitions, your Local Game Store (LGS) may offer events near you. Or you can start your own home League with friends and family—just be sure you know which rules your group agrees to play by!

Unlike other formats we've previously covered, Pauper can even the playing field for players of all budgets, since it's the least expensive option for getting into the Pokémon TCG. As decks only use common and uncommon rarity cards, you can get a decent deck for a low cost, or even stock up on cards other players sometimes give away for free. If you've played other formats over the years, you can gather up your extra commons that usually sit around collecting dust, and make a library of pauper decks. Playing Pauper makes the game more accessible to younger players, newer players, and players who want to try something different.

It's also a refreshing alternative to the highly competitive world of sanctioned play, offering players the chance to use cards and themes that wouldn't normally be competitive. Make use of a super poison deck, mill your opponent, or invent your own unique combos you wouldn't see in Standard.

Where are all the Pauper Players?

Ah, we've arrived at the tricky part! While this format is inclusive, fun, and quite challenging, establishing a thriving Pauper community in your area can require a bit of innovation. In recent years, streamers have taken to experimenting with Pokémon Pauper, play groups have formed within gaming clubs, and LGSs have even hosted tournaments. But we have yet to reach the necessary momentum to launch Pauper into mainstream play everywhere. After all, the incredibly popular Pauper format in Magic: The Gathering has been around for years, but wasn't officially supported in tabletop gameplay until just 2 years ago—largely due to fan support.

The good news is once you do get a group going, excited players become a magnet for more participants—including those who are new to the game. Want to give Pauper a try or build a local community? It's totally possible to be a ripple of positive change and get your community to take off.

Here are some tips I've found to be successful:

Decide on the rules ahead of time.

Because Pauper isn't a widely recognized format, different areas may adhere to different rules—such as coming up with specific card ban lists. Before getting a playgroup together, decide what rules you want to incorporate while upholding the spirit of using only common and uncommon rarity cards. Sticking to the legality rules of the official PTGCO can also help by reducing confusion and preventing the less fair advantage of some of the oldest Pokémon cards.

At TCGplayer, we adhere to the following:

Maybe you're looking to grow beyond your group of friends and need a way to expand your community. Do you have an after-school or local library-hosted gaming club? A youth group or club? Is there an LGS interested in getting people into the store on traditionally slow nights? The increased foot traffic of Pauper Players could boost their sales! Reach out to those in your community who can provide a safe gaming space for your group.

If you're still in school, ask your adult or a teacher if they can help. If you have school-aged kids in your life, get involved with the local Parent Teacher Group/Organization to see if your school can host a game night, and maybe even volunteer to run it (opportunity for school to fundraise selling snacks!).

From personal experience, starting a Game Night like this is extremely rewarding and really makes a positive impact—even getting entire families gaming together. More often than not, organizations would much rather see kids playing games safely at a hosted event than other alternatives. An in-person (or virtual meeting) discussion with those able to host can be the key to making your community happen. See if a phone call, e-mail, or even an old fashioned letter can get you that invite to connect in-person.

If you have enough interested players, and it's feasible, consider supplying a library of decks. By removing the obstacle of purchasing a deck, players have a higher chance of experiencing the fun and getting excited to invest in their own decks. We set up a successful Pokémon Pauper League here at TCGplayer (before COVID-19) by inviting interested players to come and check out the format, and try out our Pauper Library during breaks or after work—going from casual lunchtime matches to League with prize support. You can take a storage box, some simple deck boxes, and card sleeves (I recommend matching and color-coding the sleeves and deck boxes to prevent mix ups) and build an efficient library. This was ours: 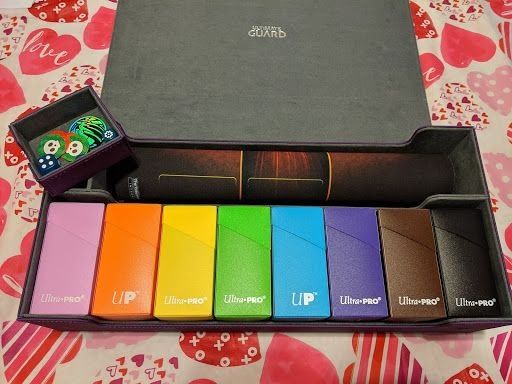 Do you stream? Play sanctioned format events? Use social media? Spread the word about Pauper and offer to teach others! Keep it fun, friendly, and a source of relaxation. Like a ripple, you can create a far-reaching interest and help Pauper take off!

Above all else, one last, incredibly important aspect to establishing a thriving Pauper community is to keep things safe during COVID-19. In-person events and gatherings might have to wait for a while, but you can definitely play against friends online using Pauper format "Expanded" decks to get started. You can start reaching out and getting involved with organizations that could host future Game Nights to introduce options like Pauper Pokémon. Sort out old collections, maybe buy a bulk lot, and build some decks to play at home and for when we're all ready to be together again.