Arrr you ready for another round of Plunder Patroll cards?

Eternity Code's adding seven new cards to the Plunder Patroll theme, effectively doubling the theme's existing support from Ignition Assault. There are a lot more Main Deck cards this time around, and that's both helpful and concerning. Ultimately I think the Plunder Patroll deck post-ETCO will have a serious shot at competitive viability, even if the lack of Wind and Earth monsters in the Extra Deck is a potential roadbump. 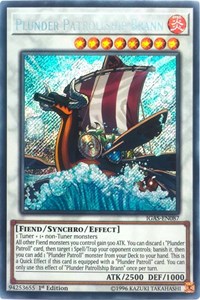 Another obvious issue that Plunder Patrolls have faced so far is the lack of Attribute coverage in their Extra Deck line-up. Upgrading Whitebeard or Redbeard to an Xyz, Link, or Synchro feels amazing, but if your opponent doesn't put a Dark, Water, or Fire monster on their field or in their graveyard you'll have to Summon these monsters the old-fashioned way. They're not exactly difficult to Summon – Whitebeard itself is a Level 4 Tuner that replaces itself when used in a Link or Synchro Summon – but you'll usually have to overextend slightly to equip them with a Plunder Patroll card.

Luckily the new cards in Eternity Code address both of the inherent weaknesses in the Plunder Patroll theme. There's a new Extra Deck monster that covers another Attribute, and a huge number of Main Deck cards to keep your Fusions, Xyz, and Synchros stocked with ammo so you can broadside your opponent.

Lys notably carries monster effect negation that's a Quick Effect regardless of whether it's equipped with a Plunder Patroll card. Instead, Lys will replace your discarded Plunder Patroll card with another from the deck if you go the extra mile to equip it with something like Whitebeard or Redbeard.

Plunder Patroll Shipshape Ships Shipping is the on-theme Fusion Spell meant to be used with Plunder Patrollship Lys, but you're just as likely to Summon Lys with Whitebeard, Redbeard, or Blackbeard in match-ups against Light themes or decks that are tapping into Light monsters. Shipping itself might still be worth playing because its graveyard-activated effect can equip a Plunder Patroll monster or the theme's new Equip Spell from the deck to a Plunder Patroll you control. It's definitely a nice bonus, but there are a few alternatives to consider for Summoning Lys.

First, Predaplant Verte Anaconda's actually pretty useful here with a teched copy of Dark Fusion – it lets you Summon a copy of Lys that can't be targeted until the end of the turn. Anaconda's first effect is also handy for changing the Attribute of an opponent's monster to Dark, allowing you to use Blackbeard to Summon Plunder Patrollship Moerk on your turn. 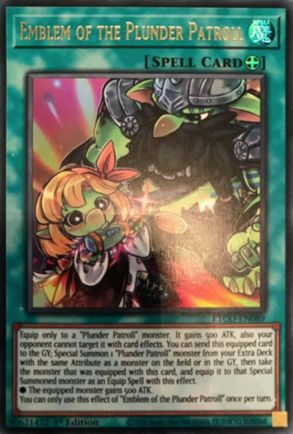 Patching Holes In Attribute Coverage With Emblem Of The Plunder Patroll
I think Plunder Patrollship Lys makes the biggest first impression of the new Plunder Patroll cards, but I'm convinced that Emblem of the Plunder Patroll is the biggest game changer among the new support. Emblem's continuous effect is certainly appreciated – after all, what's not to love about targeting immunity? Equipping Emblem to a Patrollship unlocks those lovely bonuses we've already mentioned, including turning Brann and Moerk into Quick Effects and letting Lys replace its discards. It's definitely useful purely as an Equip Spell that carries the Plunder Patroll name, but there's so much more you can do with Emblem's second effect.

You can activate Emblem of the Plunder Patroll's second effect by sending it from the field to the graveyard, which then Special Summons a Plunder Patroll from your Extra Deck with the same Attribute as a monster you control, then equips the monster that was previously equipped with Emblem and equips it to the freshly-Summoned Plunder Patroll from the Extra Deck. That's a lot of info to digest, but it's functionally the same as Whitebeard, Redbeard, and Blackbeard with one difference: your Extra Deck Summoning options are based on the monsters you control. That difference is huge, because you no longer need to rely on your opponent's selection of monsters to cheat out your Plunder Patrolls.

Imagine this combo: you Special Summon Photon Thrasher from your hand, then Normal Summon Whitebeard. You equip Emblem of the Plunder Patroll to Whitebeard, send it to the graveyard, then Special Summon Plunder Patrollship Lys. From there you're set to negate any activated monster effect, including Nibiru, the Primal Being, Ash Blossom & Joyous Spring, or Droll & Lock Bird. What's incredible is that none of those hand traps can actually stop you from pulling this combo off, which gives Plunder Patrolls an incredibly safe path towards building serious field presence early in the duel. 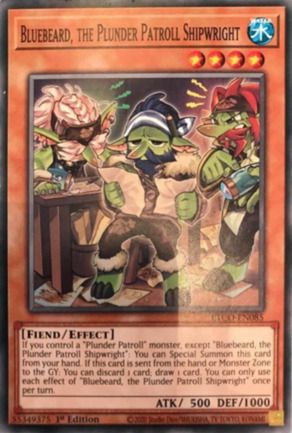 While Bluebeard feels like a shoe-in for the Main Deck, Goldenhair, the Newest Plunder Patroll is a bit more questionable. You can Special Summon it from your hand, but the cost is a bit steep compared to Bluebeard. Its second effect is also a double-edged sword, although sticking to Plunder Patroll Special Summons for the rest of the turn isn't too difficult.

More than anything else the Plunder Patroll theme just needs names and bodies to sustain the demands of the Patrollships, so Goldenhair will likely see play regardless of how steep its Summoning costs and restrictions are. Goldenhair's biggest selling point is that you can use both of its effects on the same turn, and it doesn't banish itself when it leaves the field. Playing a single copy to summon back to the field each turn before your final Plunder Patroll Summon might be the ideal ratio. 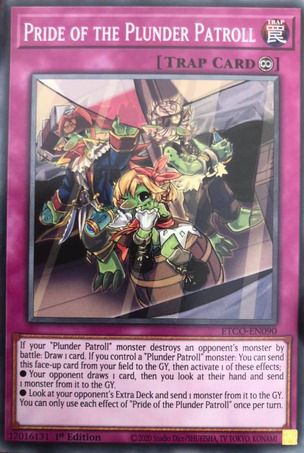 Pride of the Plunder Patroll's first effect isn't particularly impressive, but its second effect is a rare instance of hand manipulation that gives you perfect insight into your opponent's cards. It's not terribly strong by any means, so I wouldn't prioritize it. Pride's third effect has much more impact depending on the match-up, letting you snipe a monster out of your opponent's Extra Deck. We've seen Extra Deck manipulation be effective in the past, and you might end up with Pride in your hand for free via Brann's effect anyways. I see it as a match-up specific Side Deck card that just doesn't quite fit into the Main Deck strategy. In this format I have a hard time imagining that you'll be destroying enough monsters in battle to make use of Pride's draw effect, which itself is restricted to a once-per-turn activation.

Plunder Patroll Parrrty's practically demanding a one-of slot in your trap line-up to help with a couple of situations where you're able to Summon a Plunder Patroll on your opponent's turn, but you can't equip it with a Plunder Patroll card immediately. That can happen when you're resolving Blackbeard by targeting a non-Plunder Patroll monster, although that's likely to be a rarer occurrence now that we have two new Main Deck Plunder Patroll monsters. Still, Parrrty can equip itself out of the graveyard once per duel to a freshly-summoned Plunder Patroll Extra Deck monster with minimal effort, and it patches up a common hole in the Plunder Patroll strategy. Unfortunately the once-per-duel clause really hurts its viability, and its activated effect isn't exciting enough to warrant multiple copies.

The biggest challenge facing Plunder Patrolls post-Eternity Code are their missing Wind and Earth Extra Deck monsters. Maybe those cards were never planned anyways – after all, each Extra Deck card type is already represented by the current line-up. Regardless, Plunder Patrollship Lys and Emblem of the Plunder Patroll are exactly what this theme needs. I think we're going to see Plunder Patrolls pull off some big wins when tournaments start up again, and I'll personally be playing them this year. There's a lot of room for a hybrid strategy, but for the first time we can finally play a pure build without the deck feeling like a gimmick.