A couple of weeks ago, I wrote a piece on the top 5 reasons to play the Pokémon TCG. After hearing from some other players-become-parents, it's clear that the Sword and Shield games they watch their kids play on the Switch just isn't how they remember Pokémon. It's intimidating. Jumbo sized cards? Dual types? MegaStones? My Pokémon also has an EX?!

The game has evolved dramatically since the days of rock-paper-scissors mechanics. Many unique dynamics and synergies were designed to keep things challenging, fresh, and interesting - particularly for the TCG metagame, appealing to both younger and older players. While this can be exciting and challenging for current players, it can also be a little overwhelming to returning players (or anyone who learned off of their older brother's old cards they found in the garage).

So let's bridge that gap in knowledge and empower you to get back into the game!

Setup Steps have changed over the years. As of today (Sword and Shield: Darkness Ablaze), we start off by:

You may have played during Generation 1, when Pokémon first came out, and even made it a bit into Generation 2, but stopped playing before the Expedition set (2002 in the US), where cards had funny lines on them like this: 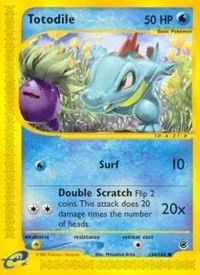 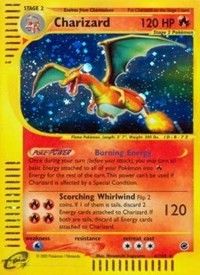 These are Pokémon E-reader cards. The "Dot Strips" on the bottom or sides were basically barcodes that scanned into a device called the Nintendo e-Reader, using the Gameboy Advance. Sadly, the accessory wasn't popular enough in North America to survive past 2004. E-Reader strips were a novelty that gave a player in-game items, mini-games, and music in various video games. E-cards don't affect TCG gameplay in terms of rules, but now you won't be confused if you come across one.

The Expedition set didn't just give us digital in-game goodies - it also introduced a subset of Trainer cards called "Supporter Cards". Unlike other Trainer cards that have been around since game launch - like Item -, you can only play one Supporter card per turn. As of the Sword and Shield set becoming tournament legal on February 21st, 2020, the player who goes first cannot play a Supporter card on the first turn.

Shining Pokémon cards depicted an alternate color variation of the Pokémon, like in the video games. They made their debut back in Neo Revelation (2001) and Neo Destiny (2002). Decks could only contain one of each kind of these extremely powerful cards, which all happened to be Basic, and their attacks required different mixed energy types. 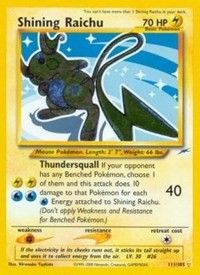 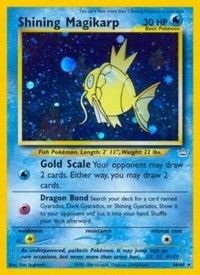 One important note: Shining Pokémon returned in the 2017 Shining Pokémon subset of the Sun & Moon series. This time, a foil layer was applied to the depicted Pokémon, making them literally shiny. Unlike Neo Destiny, multiple Energy types weren't required for attack costs, and the 1 per deck rule was lifted. With Sun & Moon, a new rarity symbol appeared for Shining Pokémon in the form of a foil blue and yellow colored star. Additionally, all cards in this set were either Legendary or Mythical.

Holographic cards have been around since the original Base Set, when foiling was applied to the background of the Pokémon illustration. In 2002, The Legendary Collection started printing cards with shiny foiling on the front of the card's face, with exception to the illustration, which was left unfoiled. This is known as a "reverse foil." While these cards are beautiful, they're not necessarily considered rare, as even commons can be reverse holofoil.

All Third Generation sets have "EX" in their name, which stands for "extra." These cards feature higher HP and a wide range of attacks with additional powerful effects. Because the "EX" portion is included in the name, you can have four copies of these cards in your deck - for example, you can have 4 Pikachu and 4 Pikachu-EX in your deck. Finally, the "EX rule" states that if a player knocks one of these out, they get to take 2 prize cards, so be mindful. 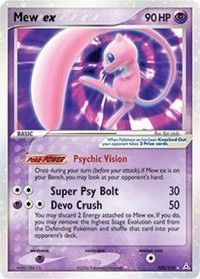 EX continued to get even more 'extra' with the introduction of Star Pokémon, called "Pokémon Star", during EX Team Rocket Returns in 2004. Like the original concept of Shining Pokémon, Star Pokémon depict alternate color variations of Pokémon and appear with a star symbol (☆) on the card next to the Pokémon's name. Only one of an individual Pokémon Star card is allowed per deck. 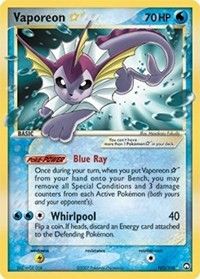 There's an interesting storyline behind Delta cards - some scientists were using fancy high tech gadgets to track down the legendary Pokémon Mew, and exposed a bunch of Pokémon to electromagnetic waves in the process. Because science. This created new species of those affected, and more or less scrambled their Pokémon types. For example, Seadra δ Delta Species can be a Fire type or a Fighting type, instead of the usual Water type, but its weakness is still Electric. 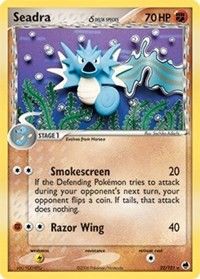 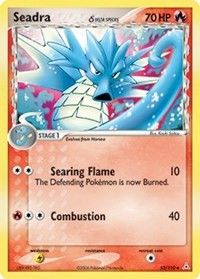 Beginning with Generation Four (2007) and Diamond and Pearl Base Set, Pokémon LV.X replaced the now-retired Pokémon-EX and Pokémon Star cards. These are neither Basic Pokémon nor Evolutions. LV.X is considered to be "leveling up" a Pokémon.

Interestingly, like with evolution, a Pokémon cannot be Leveled-Up on the turn it is played or evolved. Likewise, a Leveled-Up Pokémon loses Special Conditions that affect it, such as Poison or Burn. But unlike evolution, only Active (not Benched) Pokémon can be Leveled-Up.

Pokémon LV.X cards also share the same name as the Pokémon they Level-Up from - so you can't have 4 Leveled Up versions in your deck in addition to copies of the standard version of the card. Finally, it's important to remember that LV.X Pokémon are able to use all Pokémon Powers and attacks that could be used by its previous level (i.e. the Basic or Evolved Pokémon under it), making these cards a bit more complex. 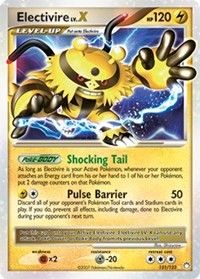 Diamond and Pearl also included energy-less attacks, which are basically attacks that have a transparent Energy symbol next to them where the expected Energy symbol would be found. As the name implies, these attacks can happen if the specified requirements are met, without using any Energy. 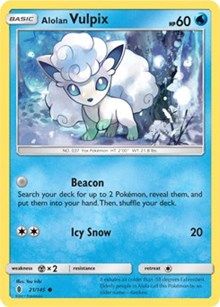 These cards were introduced in HeartGold and SoulSilver as a replacement for Pokémon LV.X. Pokémon Prime cards were considerably more powerful than their non-Prime counterparts, and featured close-up face illustrations of the Pokémon with a foil border and name.

Pokémon LEGEND cards feature one or two Pokémon and consist of two different cards. They're unique in that you need to have both cards in your hand (each considered to be a half of the card) and then play them both at once, essentially combining the two into one single Pokémon. The word "LEGEND" is always included at the end of their names. However, both halves of the card have the same name, so only two copies of a complete Pokémon LEGEND card can be used in a deck.

These cards cannot be played during game setup, and aren't affected by anything that affects either Basic Pokémon or Evolution cards. However, anything that affects un-evolved Pokémon will affect Pokémon Legend. Outside of play, each half is treated as a separate card. These cards are amazing to look at, and arguably feature some of the most impressive artwork in the game. 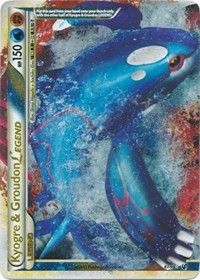 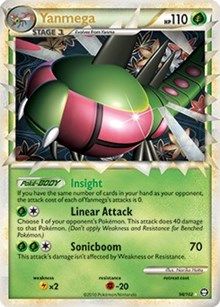 Dragons became a type in Generation 5 in Dragons Exalted (2012).

Mega Pokémon feature a large stylized "M" graphic to the left side of the card name, and were introduced in XY as a new mechanic. Mega Evolutions are an evolution of EX cards and follow all the same rules of EX (i.e. knocking one out results in 2 prize cards). When you play a Mega Evolution card, your turn immediately ends. There is an exception to this rule, when players use a Pokémon tool called "Spirit Link". 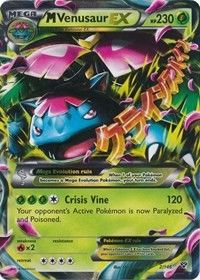 BREAKpoint introduced BREAK as a new mechanic in 2016. Cards feature a stylized "BREAK" graphic on the card name. They function as an evolution, and are played sideways over their previous stage and cover the illustration box. These cards get an HP boost and additional attacks or abilities, but also keep the attacks, Abilities, Retreat, Weakness, and Resistance of the previous stage. 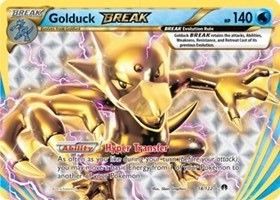 2017's Sun & Moon introduced the new Pokémon-GX mechanic with the Seventh Generation. Much like the previous EX, GX meant that HP and attacks were higher and more challenging. As with EX, when a GX Pokémon is knocked out, the player who knocked it out gets 2 prize cards.

Prism Star was a card variant introduced in the Ultra Prism expansion. Like the name, Prism cards feature a prism graphic on the card face. These can be Pokémon, Special Energy, Stadium or Supporter Cards. You can only use 1 Prism Star card per deck and when you would discard it, it goes into a "Lost Zone" instead. If you're familiar with Magic: The Gathering, it's similar to the Exile mechanic. 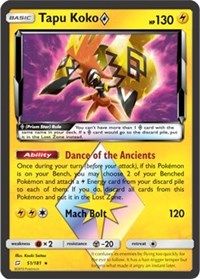 In Sun & Moon-Team Up, Pokémon introduced the concept of Team-Up Pokémon. These cards sport powered-up combinations of Pokémon. Watch out though - your Pokémon have higher HP and Attack power, but if one of these get knocked out, they're worth three prize cards! 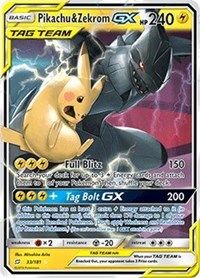 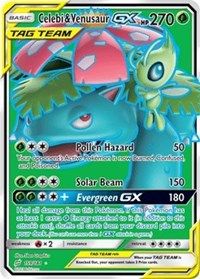 Bringing us up to present day, we have the Pokémon-V and V-Max mechanics, introduced with Generation Eight in the Sword & Shield set (2020). Pokémon-V basically replaced the GX mechanic, and V-Max is the "gigantamax" or "dynamax" (i.e. getting real super big with the power of some magic stardust bracelet), as seen in the Sword and Shield video games.

V and V-Max cards have some of the highest HP totals and strongest attack values we've ever seen in the TCG. They also pose a larger risk, too - when a Pokémon V gets knocked out, that means 2 prize cards are taken. And if you get your VMAX card knocked out, your opponent will get 3 prize cards, so tread carefully! 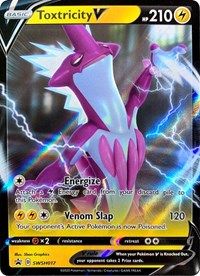 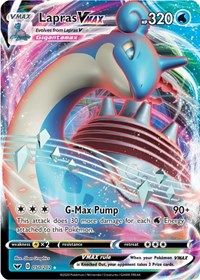 From time to time, you might come across "regional" forms of Pokémon. What this means is that those Pokemon lived in climates different from where they'd been previously found. They now look different in terms of color/appearance, but are NOT considered shiny. Some Pokémon can only be evolved from their region-version Basic Pokémon form. Others don't have a Basic form that is region specific. For example, Alolan Marowak evolves from Cubone because there is no Alolan Cubone. Galarian Rapidash, however, can only evolve from Galarian Ponyta. Card text will always specify. 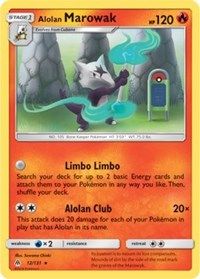 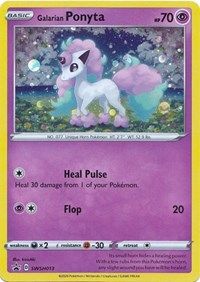 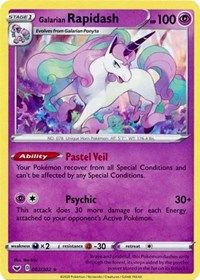 Finally, be sure to keep up-to-date on the Banned List - this is what the Pokémon company uses to keep track of what can no longer be played in events!