It's the centerpiece of the dedicated Prediction Princess strategy because it totally changes the narrative on Flip Effects. For over a decade, Flip Effects have seen a steady decline in competitive play, and that's largely the result of the terrible reality of setting a monster face-down. A set monster exerts zero pressure on your opponent because it isn't applying a continuous effect, or threatening a trigger effect. Setting a monster's an extremely passive move that signals "I'm not a threat." Even the most inexperienced players can pick up on that and punish you for it.

Flip Effects saw a small bump when Shaddolls released, but the Shaddoll theme isn't necessarily built on resolving the flip component of their monsters. Sinister Shadow Games and The Hidden City helped make Flip Effects a serious threat in Shaddolls and Subterrors because their effects would flip monsters face-up on the opponent's turn. Prediction Princess Tarotrei does something similar, but its effects aren't limited to any specific theme. It turns any Flip Effect into a Quick Effect, and that's a game changer for certain flip monsters. 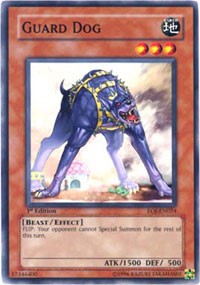 So what's the best Flip Effect to exploit with Prediction Princess Tarotrei? I've really enjoyed using Pot of the Forbidden in the past with its suite of insanely powerful effects, which include bootleg versions of Raigeki, Harpie's Feather Duster, Pot of Greed, and an improved Trap Dustshoot. Pot of the Forbidden's utility is almost unmatched, but it's nearly impossible to play outside of a deck with Prediction Princess Tarotrei. That said, I don't think I'd build the deck entirely around Pot of the Forbidden. It's a great one-of tech pick, but your opponent can still play through any of its effects.

Guard Dog, on the other hand, is a lot more difficult to play around and much more deserving of a win condition for this strategy. Flipping Guard Dog on your opponent's turn can stop your opponent from playing the game entirely. You've seen the kind of devastation that Artifact Scythe and Amorphage Goliath deliver against strategies that rely on the Extra Deck, but Guard Dog stonewalls an even wider range of strategies.

Pot of The Forbidden

Manju of the Ten Thousand Hands

Valerifawn, Mystical Beast of the Forest

Manju of the Ten Thousand Hands is best in slot for a budget build, but it's competing with the deck's other key Normal Summon: Rescue Cat. Between Manju of the Ten Thousand Hands, Pre-Preparation of Rites and Extra Foolish Burial, you'll almost always have access to your Ritual Monster, and usually enough fodder to summon it. Ideally you won't have to Summon Manju at all, but it's there to guarantee a Turn 1 Prediction Princess Tarotrei. Don't forget that you can activate Manju off its Normal and Flip Summon, so feel free to abuse it with Prediction Princess Tarotrei if you have the opportunity.

Okay, let's check out this build's other key engine. Rescue Cat isn't mind blowing when you're trying to pull Guard Dog out of the deck anyways, but it's more than a doggy delivery service. Resolving Rescue Cat lets you put Guard Dog in play alongside Valerifawn, Mystical Beast of the Forest or Key Mouse depending on your Synchro Summoning goals.

You can use Valerifawn and Guard Dog to Synchro Summon Naturia Beast, or pair Guard Dog with Key Mouse to summon Herald of the Arc Light instead. Naturia Beast is pretty self-explanatory, but you can take an extra step with Herald by sending it from the Extra Monster Zone to the graveyard to Link Summon Gravity Controller. Doing that triggers Herald of the Arc Light search effect immediately, which is extremely useful in a pinch.

Pot of the Forbidden

A Turn 1 Lockdown With Excellent Recovery

Pairing Guard Dog's "temporary" floodgate with the negation of Naturia Beast or Herald of the Arc Light is a devastating combo that can force most players to end their turn without making a move. It's surprisingly resilient: you activate Prediction Princess Tarotrei in the Standby Phase before your opponent can use their removal effects, or you wait for your opponent to commit a card to the field to beat Infinite Impermanence. You can often play around a single Ash Blossom & Joyous Spring, and you'll also typically avoid Nibiru, the Primal Being unless you use both Rescue Cat and an Impcantation on the same turn.

Guard Dog itself is challenging to outplay, especially since it doesn't need to stick around on the field after it's flipped face-up. Even if your opponent breaks your board with Evenly Matched, they'll need to jump through some hoops to make sure you can't make a comeback next turn. As long as you have another Prediction Princess Tarotrei summon on the following turn, and a way to get to Guard Dog again, you'll be set to lock down your opponent's Special Summons on their next turn.

Playing second is more of a struggle. Manipulating Pot of the Forbidden with Prediction Princess Tarotrei can answer an established board, but it's easily countered by any number of interruption effects. That said, you do have a few options.

First, you can Link Summon Subterror Behemoth Fiendess to send Shaddoll Dragon to the graveyard to remove backrow, or bait out your opponent's effects. Second, you can send Elder Entity N'tss to the graveyard with Extra-Foolish Burial to destroy a card on the field. Finally, don't underestimate Prediction Princess Tarotrei own aggressive power. It's not as strong as other Level 9s, but its Quick Effect can turn off floodgates, change the Battle Positions of non-Link Monsters, and delay ignition effects by flipping monsters face-down right after they're summoned. 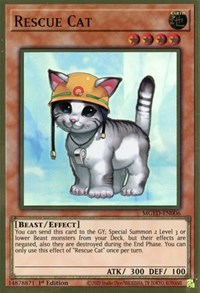 Extra-Foolish Burial is a potential liability with Impcantation Chalislime, but it's rare to actually take damage from Impcantation Chalislime effect. If you're being attacked directly by a Special Summoned monster you've probably lost the duel anyways, so just keep in mind that the biggest threat to your strategy is probably something that can negate Prediction Ritual. Droll & Lock Bird hurts too, so it's worth siding copies of Called by the Grave to counter it. Kaijus can also be a threat if you're waiting too long to activate Prediction Princess Tarotrei. Try to use Prediction Princess Tarotrei as soon as possible if it doesn't look like your opponent's playing Infinite Impermanence.

If you have the budget to expand on this strategy you'll want to invest in the Extra Deck. Crystron Halqifibrax is a natural fit with Rescue Cat and it's a much better way to Summon Herald of the Arc Light. You can add in all the extra pieces you need from there, including Deskbot 001 and Mecha Phantom Beast Auroradon. You can pull off some wild plays by leveraging Crystron Halqifibrax, and Rescue Cat's the perfect way to kickstart those combos. In the Main Deck you can try out three copies of Pot of Extravagance since you're not playing any other draw effects on your turn.

This deck will definitely draw some interesting reactions from your opponents, especially when you reveal that the ace up your sleeve is a Level 3 monster from 2006. It's amazingly cheap, with Cross-Sheep representing one of the most expensive cards at $6 to $7 a copy. Playing two isn't mandatory, so you can get away with just one. The same can be said for Herald of the Arc Light. Your actual Extra Deck choices aren't too important outside of Naturia Beast, at least one copy of Herald of the Arc Light, and an Elder Entity N'tss to make the most of Extra-Foolish Burial. Manju of the Ten Thousand Hands is still a bit pricey at $3 to $4 a copy, making it the most expensive card in the Main Deck. All in all, you can build this deck from the ground up for about $90, or considerably less if you already have some of the cards kicking around.

Prediction Princess Tarotrei's incredibly fun to play, and Guard Dog helps make sure you're not overrun by Special Summons. It's a great casual strategy that leans heavily into the Ritual playstyle, and you can build it on a budget with plenty of investment paths for upgrades. Nearly all of the cards in this deck can be put towards future Ritual or flip-based strategies too, so the money you're investing will keep paying dividends for years to come.