Quite a few Japanese Trading Card Games have made it to America, including the Pokémon Trading Card Game and Yu-Gi-Oh. But a vastly greater number of TCGs based on anime or Japanese video games falter immensely when they try to reach a Western audience.

The Digimon Card Game, a new iteration of the Digimon franchise's many attempts to make a Digimon TCG that sticks in the West, has been a huge hit among fans of the franchise. Players have been spreading the word of this highly-anticipated game through word of mouth and on social media. Put simply, Digimon has a niche in the trading card game industry at last.

When Target retail stores in the United States started stocking shelves with a short supply of the Digimon Card Game prior to the original official English release date of February 12th (a date which was delayed from late January), nobody could have guessed that the stores would be bombarded with Digimon fans clamoring for the ultimately sparse supply of the game.

As a result of the short supply and high demand of this game, Digimon fans all over the Internet have been scouring Facebook groups and pages for leads as to where they can find Digimon Card Game starter decks, booster packs, and supplies in stock. But for all that scouring, it seems that this game has experienced a vast and perhaps strategic buyout in advance of the release date. Social media threads have popped up by the score asking where fans can find packs, boxes, and starter decks. Administrators and moderators of Facebook fan groups have created mega-threads to try and contain the sheer mass of posts made, but these mega-threads are obsoleted by the day as new information comes to light about some stores going from having stock to being out in the blink of an eye.

Interestingly enough, many Targets seem to be out of stock of Pokémon cards as well. However, while this is notable as the Pokémon card craze hasn't seen such buyouts since its initial release, much like Pokémon back then Digimon is just getting a fresh start now. Back in the late 1990's there were not nearly as many TCGs in wide circulation in the United States, and demand for trading card game components was not nearly as high as it is now for established games like the Pokémon TCG, Yu-Gi-Oh, and Magic: The Gathering.

Bandai, the publisher for the Digimon Card Game, has responded to these levels of demand. According to Bandai's announcement on the Facebook page for the English release of the game:

We have become aware that a number of retailers have posted that we are not reprinting V1.0 or V1.5 booster boxes. However, reprints of both versions are currently underway to meet demand. This reprint will be made available to distributors at the end of February. Shipping schedules globally continue to be impacted by Covid-19 so we recommend stores work with their distributor representatives for updates on the reprint availability.

Ideally, this will afford the players and collectors of the Digimon Card Game a bit of solace as they struggle to find cards for the game, especially paired with the fact that the game's initial allocation hasn't even been released yet. 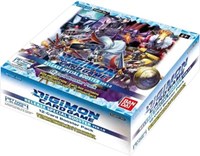 Meanwhile, on the TCGplayer marketplace, booster boxes of the Base Set have climbed to a market price of $189.41, far higher than the price many retailers had presold boxes. An alternate art version of the chase rare of the set, Omnimon, has a market price of $179.99 at time of writing. 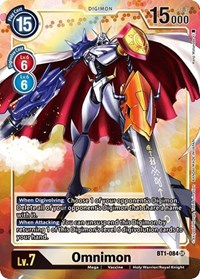 Other chase cards fetch $60 and higher. The prices for a chase rare of a card from a Japanese game that hasn't released in the West yet has not been this high since, arguably, 1999, when the Pokémon Trading Card Game first got its English release. To be fair, the market for Pokémon was not established firmly back then due to the internet being so new, but that mainly just adds to the mystique of the Digimon Card Game's success.

Of course, there are many reasons why we can and should be more skeptical of the Digimon Card Game's instant success. Wizards of the Coast's Transformers TCG and Alter Reality Games' Argent Saga were also instant hits, but due to various reasons—not the least of which was COVID-19—had to cease production. Plus, with tabletop gaming as a whole suffering due to the need to socially distance during the pandemic, it's going to be very difficult to run sanctioned events once the game releases (though not impossible). Simply put, there may not be room for a game like this anymore.

Digimon itself as a franchise has had a total of nine card games (five originally made in Japan and four in the United States and Europe), and of those nine games, only this one has managed to be anywhere near this popular in the West. Let's hope publisher Bandai keep the game fresh and the cards plentiful going forward.