When players have discussions around which cards are the best in multiplayer games, most conversations are something like this:

Aaron: "Have you seen this card?! It is ridiculous!"

Aaron:"That would be so awesome in my Atraxa deck!"

Betty: "Wait! What about my Breya deck?"

While I appreciate how fun it is to take part in these conversations (I have them with every set's release!), they don't go far when determining how good a card actually is in multiplayer games. "Awesome," "ridiculous," and "ban-able," are hardly measurable levels of value in a multiplayer game.

A few years ago, Marshall Sutcliffe wrote about a way to rate cards that his podcasting partner at the time, Brian Wong, had devised. Wong referred to the system as Quadrant Theory. He was using it as a way to rate cards for Limited games. The basic idea was that there were four different states in a Limited game. If you considered the value of a card in each state, or quadrant, you would find out how good a card was. If a card was only good in one or two quadrants, it meant that half the time, the card wasn't any good. If the card wasn't good during half the game, it would rate worse than a card that was good 75% of the time.

Quadrant Theory has proven to be a valuable tool for Limited players, as it seems to have clarified for everyone what made a good card. Sutcliffe continues to use the theory in his podcast, Limited Resources, and most Limited experts agree that it is at least a good starting point in determining how good a card is in a Limited format. 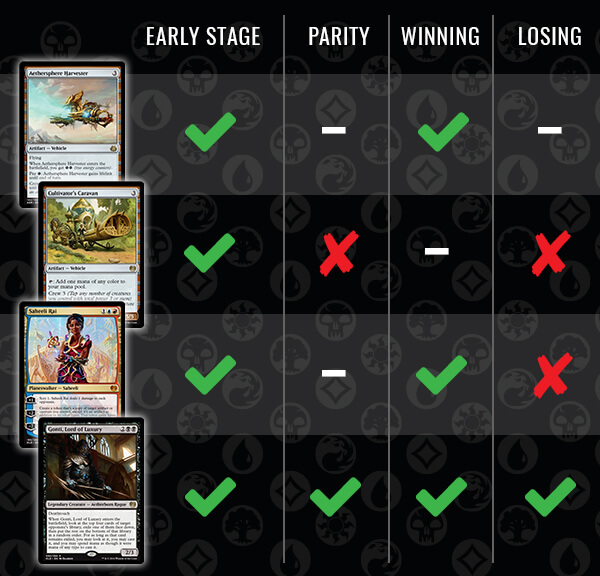 I was curious if Quadrant Theory could be applied to the multiplayer format, so I thought I would walk you through the quadrants and try to apply it to a multiplayer game.

1. Opening or Developing (aka the Early Stage)

In Limited games, this is when the players are "playing cards from their opening hands, and establishing themselves as the aggressor or control player." For multiplayer games, this is the point where the players are developing the board state. They are getting out early permanents and ramping up to cast their more expensive, board altering cards.

Not surprisingly, cards that are good in this stage include cards like lands, Sol Ring, Cultivate, and Kodama's Reach. Any card that is in your deck to speed up your mana is good here. These cards don't have an exclusive hold on the Early Stage, Low casting-cost cards that deter your opponents from hitting you are good here. Cards that let you draw more cards are good here. Card drawing is one way to find more lands and other cards that will help you at this point and later in the game. Not surprisingly, high mana cost cards that you can't cast yet are not great in the Early Stage.

This is the point in a Limited game when the board state is stalled. A card that is good in this quadrant allows you to break the board state. Generally, these cards provide a way to break through or give you significant card advantage, making it more likely that you'll break the stalemate before your opponent.

This is very similar in multiplayer games, with a wrinkle. With multiple players, you can be at Parity with one opponent but in a Winning or Losing position with another. This means that unlike Quadrant Theory for Limited, where you are always in one quadrant or another during a game, Multiplayer Quadrant Theory can see you in multiple quadrants at the same time.

For a Parity position, cards that provide a way through or card advantage are great. Rogue's Passage makes a creature unblockable. Creatures with some kind of evasion tend to be good in the Parity quadrant. flying, shadow, trample; the list goes on. Consecrated Sphinx, Rhystic Study and Sphinx's Revelation all shine here as well.

The problem for Parity in multiplayer lies with the stalemate options. Flying creatures may be solid in this quadrant, but it may be that in a particular game state, another flying creature is not the solution to break Parity. This is where we look at cards like Wrath of God or Hallowed Burial. Both are good cards in the Parity quadrant since they break the stalemate, but you can argue that Wrath is better because it only costs four mana, or Hallowed Burial is better, since you can be sure players won't simply bring the cards back from the graveyard or ignore a Wrath because they are indestructible.

In Limited, this is simply the point in the game where you are ahead and looking for the card that shuts the door and wins the game. I think this is the weakest part of Quadrant Theory, since practically every card will further your board state, so most cards score in this category. It feels a little redundant. A card that scores in the Parity quadrant will also score in the Winning quadrant.

For multiplayer though, this is a different thing. If you are winning, you are still looking for a card that will close out the game quickly. Multiplayer games tend to be longer than one-on-one games, so there is a person in the Winning position for longer as well. Due to this stretched time, the leader is trying to close out the game, but still needs several turns to do so since there are more players to eliminate. As a result, cards that let the leader maintain a Winning position are valuable. In addition to cards that eliminate opponents, cards that prevent opponents from attacking you but help keep your winning position since it will be more difficult for your opponents to deal with you also score well in this quadrant.

In Limited, this is the part of the game when you are in a losing position. It is tough to find cards that score well in this category for Limited since you tend to need cards that can dramatically swing the tide of a game and have immediate effect. Sutcliffe sees sweeper effects and excellent blockers as cards that shine here.

For multiplayer games, before we start looking at cards that score well in the Losing quadrant, we need to look at where Parity ends and Losing begins. In multiplayer, I see a player in the Losing quadrant when their position in the game is such that they could be eliminated by at least one other player within the next couple of turns. I'm not considering combo kills out of nowhere here, I'm looking at the overall board state. If you have a way to overwhelm my position and kill me over the next two turns, I'm in the Losing quadrant. This holds true even if the other two opponents can't hurt me at all, or are in an even more vulnerable position than I am.

If three of us are all under 10 life with plenty of lands and a couple of creatures on the battlefield, while Wayne is at 30 life and a way to hit any opponent, am I losing? Yes, and so are Wayne's other two opponents. You can argue that at least one of Wayne's opponents isn't too badly off, since they will have several turns to find an answer, or to just be part of the three of us trying to take Wayne down, but without knowing where Wayne will attack, all three are in the Losing quadrant.

Beyond mass removal, I like creatures with deathtouch here as well. While they don't help with every situation, they can often deter an opponent with one or two creatures that are doing all the work.

I picked a few cards from Kaladesh block to demonstrate how the Multiplayer Quadrant Theory works. The first card is Aethersphere Harvester. The Harvester offers a 3/5 flyer that will deter your opponents from coming your way in the Early Stage, so good marks there. It does all right in the Parity quadrant as a flying creature, but since it isn't always a flying creature, you can't necessarily rely on it to maintain Parity. It scores well in the Winning quadrant with flying and lifelink to pad your total. If you were already ahead, the Harvester can be problematic. Finally, in the Losing quadrant, it does all right. A 3/5 flying creature can bring you to Parity, but it isn't going to take you from a Losing position to a winning position too many times.

The second card is Cultivator's Caravan. As a mana rock, it scores well in the Early Stage quadrant. It doesn't fare as well in the Parity quadrant simply because a 5/5 without evasion is rarely going to break through a stalemate position you frequently see in the Parity quadrant. That 5/5 can be okay in the Winning quadrant, but even there, you tend to want something more. Finally, an extra mana or a 5/5 may be enough to plug the leak in the Losing quadrant, but generally you want a lot more.

I also wanted to try a planeswalker in the Multiplayer Quadrant Theory, so I tried Saheeli Rai. At three mana with the ability to scry or copy a mana rock, she does well in the Early Stage quadrant. At Parity, she creates an extra creature or artifact which may be enough to break many Parity positions. Saheeli Rai does a great job in the Winning quadrant with the extra creature or artifact. In the Losing quadrant, she stumbles though. A token copy for one turn is a nice way to break Parity or push through for a win, but it is rarely enough to turn the tide when in a Losing position.

So what sort of card scores well in every category? Gonti, Lord of Luxury puts up interesting numbers. Getting Gonti in the Early Stage means having a blocker that can handle most of what would attack you in the Early Stage and often being a deterrent against taking those early points of damage some players love to dish out. In the Parity and Winning quadrants, the card Gonti takes gives you a chance to burst ahead or shut out your opponents. In the Losing Quadrant, Gonti's deathtouch ability can be what is needed to stem the bleeding and return you to at least a Parity position in the game.

What do you think of the Multiplayer Quadrant Theory? What cards do you see scoring well? Next week I'll present a different rating system and we can compare the strengths and weaknesses of each!