Happy New Year! Last week I talked about my Magic resolutions for the New Year. One of the resolutions was to tune my decks. Like everyone at the gym this week, I'm excited to keep my resolutions early on in the year, so I thought I'd take this chance to tune up one of my decks in desperate need of an upgrade: Dragonstorm! Let's hope I can continue for longer than most of those currently in the gym. 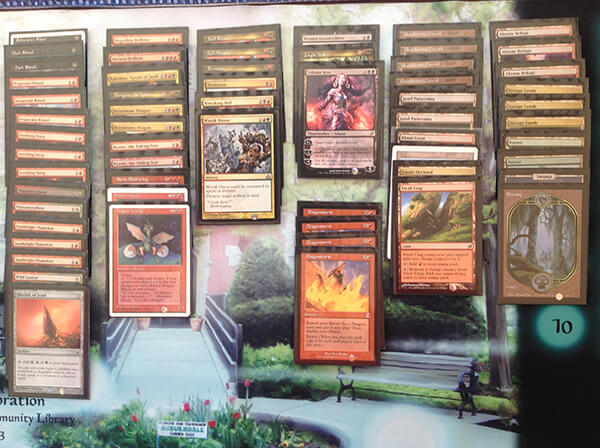 When I said upgrade, I meant it! This deck has been together since Zendikar. Not Battle for Zendikar, original Zendikar! Between newer cards and improving the selections I made already, there should be plenty of upgrade options!

For those of you unfamiliar with Dragonstorm decks, the purpose of the deck is to play a number of spells in one turn, then play Dragonstorm. This lets you search the deck for that many dragons! Pretty much every version has a way to give your dragons haste, so they can attack the turn you cast the Dragonstorm. In most games, that should be the end of things.

The difficulty in getting Dragonstorm to go off lies with the cost of the card. If you are using nine mana to cast Dragonstorm, you won't have enough mana left to pad your storm count. The easiest way around this is to use "ritual" spells to get you to nine mana. "Rituals" are spells that cost some mana and produce more mana. Named after Dark Ritual, there are all sorts of "rituals" available now, and I have several in the deck.

Having played the deck plenty of times, I thought I would break down the changes I want to make, going through each in turn. The best part of this will be knowing you are looking at my changes and shaking your head. "Why is he adding another Soulbright Flamekin? The card is garbage! He should be adding Rattleclaw Mystic!" While I'm going to be adding only cards I already own, if you think I've missed something let me know in the comments or on Twitter. I'm not reluctant to buying cards that are obviously better in the deck than something I'm already running! 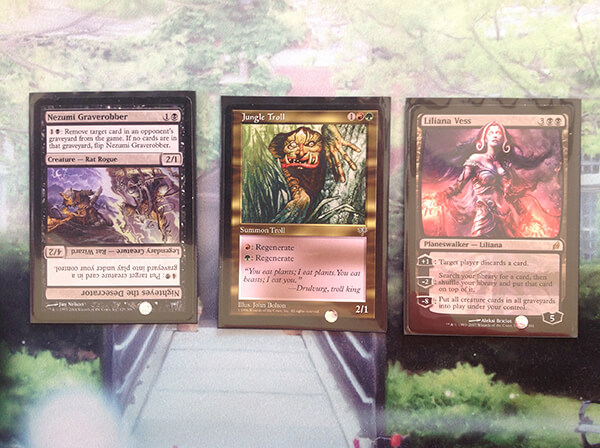 These are the most obvious strays in the deck. You may have noticed I only have 20 lands in the deck; too few. I really want to get to four lands in play as quickly as I can, so I'd like to get to 22 or 23 lands for the deck. I think I can cut a card from here to help make room for the additional lands.

Liliana Vess makes some sense as a way to tutor for the card you need to get things rolling or to find a particular piece of removal, but it rarely happened. With four Dragonstorm in the deck, along with more than 10 spells to add mana, I rarely needed to tutor for something. Nezumi Graverobber is there to slow up graveyard recursion decks that were (and still are) rampant in my group. The problem is that it really doesn't work. It is easily removed and rarely around when you actually need it. Jungle Troll was thrown in as a defensive specialist. It was something that could come down early and deter my opponents. Having mana available to regenerate was rarely a problem so when it hit, opponents would search for easier opponents to hit. However, there are other cards out there that can serve this purpose and help the deck towards playing Dragonstorm, so these are all out.

Generally I won't bother to talk about lands, leaving you to understand that I'll set them up in a way that makes sense for the deck. For this deck, I wanted to make sure I could hardcast any dragon in case things were going poorly, so there are plenty of ways to get black and green mana in a deck that is primarily red.

But I do want to mention Geothermal Crevice. I know there are better lands out there, but the ability to sacrifice the land for the extra mana has been a godsend. It means I get to cast Dragonstorm a turn earlier than normal! It can start up the Dark Ritual if black mana is limited. Normally I wouldn't be excited about a land that gets sacrificed, but this is an all-or-nothing deck with Dragonstorm. You aren't expecting the game to go to the next turn, so there is no reason to hang onto the land. 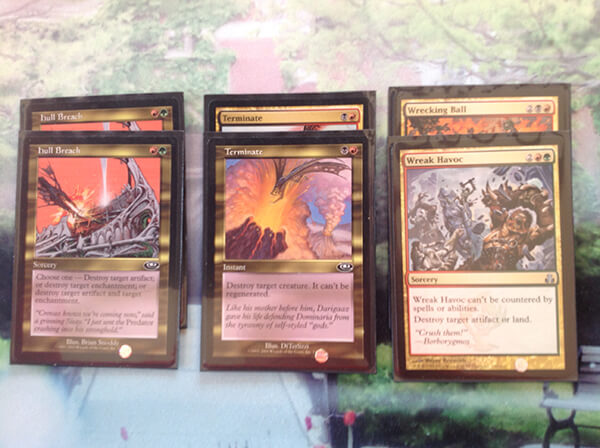 When I built the deck, there were plenty of lands that were causing issues. Maze of Ith can be a problem, and not answering Urza lands was not fun. Those cards aren't nearly as popular in my metagame now, so dropping a card that destroys land should be fine. I think Wreak Havoc can go. Four mana for a sorcery speed removal just isn't what I want. While I like Hull Breach for the option of taking out two targets, Destructive Revelry only costs two mana and hits at instant speed. I'll live with the loss of flexibility for the chance to use the Revelry as one of the spells that up the storm count. That and two Terminates should be enough removal for the deck. 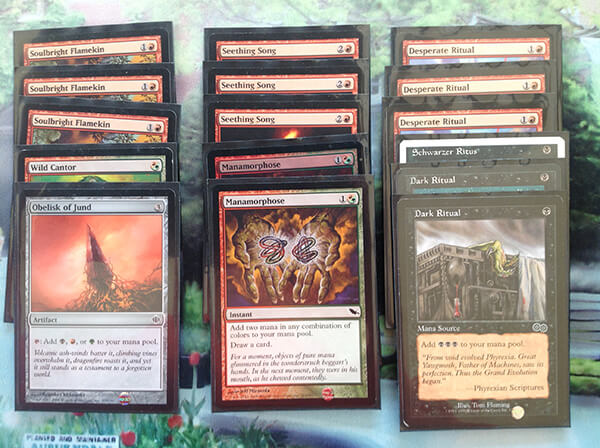 The purpose of these cards is to get the mana to cast Dragonstorm and pad the storm count. Generally, I want the storm count to be at least four. If you can put five dragons on the battlefield (and one of them is Broodmate Dragon) it is generally enough to win games. I prefer the lower casting cost cards, since I want to spend mana on the Dragonstorm, not on the cards. This is the reason Dark Ritual is there. Desperate Ritual isn't a great deal, netting only one mana, but I've managed to use the Arcane ability a few times with other Desperate Rituals. Realistically though, there should be four of them or none of them, so I'm going to up the count to four. The Obelisk of Jund is out. It doesn't add to the storm count, taps for only one mana, and offers no early help defending.

The real question is why the creatures are here. Wild Cantor nets nothing, adding only to the storm count by replacing itself. The Soulbright Flamekin have proven to be great. They are an early creature to play that brings your mana count from six to eight. While it doesn't add to the storm count, it stops some of the early damage I would take.

So without Desperate Ritual and Wild Cantor, what is changing?

I added the Caryatids for the early defense (in your face, Jungle Troll!). Getting mana of any color can be important if you find yourself having to hardcast one of your dragons. 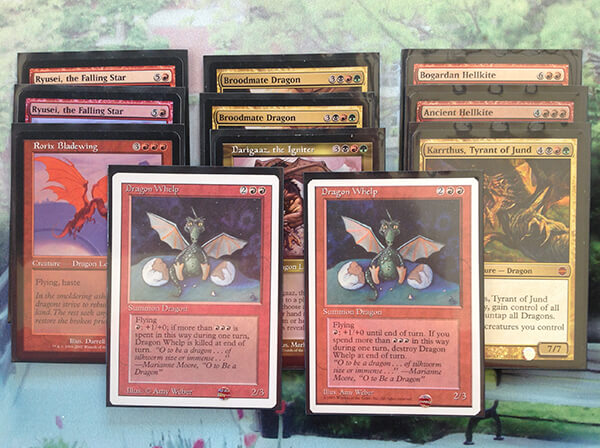 I've been saving the best for last. When Dragons of Tarkir came out I was watching which dragons I wanted to add or substitute into the deck. Then I got excited about the legendary creatures in the block, and the Dragonstorm deck just got put on the back burner and eventually forgotten.

No longer! When it comes to the dragons currently in the deck, the only untouchables are the Dragon Whelps and Karrthus, Tyrant of Jund. With the Whelps, I want a smaller dragon that I can cast regularly, while Karrthus gives all your dragons haste. The haste is essential for the Dragonstorm deck, since without it, you end up with a bunch of dragons just sitting there until your next turn, vulnerable to all kinds of mass removal or bounce. The dragons need to attack right away!

After looking through all the dragons since I updated the deck, I settled on four additions.

- Forgestoker Dragon gives me a way to deal with small pesky flying creatures that threaten to chump my dragon assault. I'm a little worried I won't have the mana to use it, but I'll have to manage my mana more carefully when there are chump blockers involved.

- Dragonlord Atarka, much like the Bogardan Hellkite, deals five damage to creatures that may be able to block. Add in an 8/8 body that tramples and flies, and I'm good to go!

- Kolaghan, the Storm's Fury means that if five dragons are attacking, they each get +5/+0 until the end of the turn. Suddenly each dragon is hitting for double-digit damage!

- Atarka, World Render gives all my dragons double strike. Doubling up the damage the dragons deal ensures all of my opponents will be dying straight away.

To fit all of these fine folks into the deck, I cut Ryusei, the Falling Star (both copies), Darigaaz, the Igniter, and a Broodmate Dragon. Ryusei only does fun stuff when it dies, the damage that Darigaaz can add is minimal in comparison to what is getting added, and dropping one Broodmate Dragon gives me more options, and with this deck, that should mean more fun. 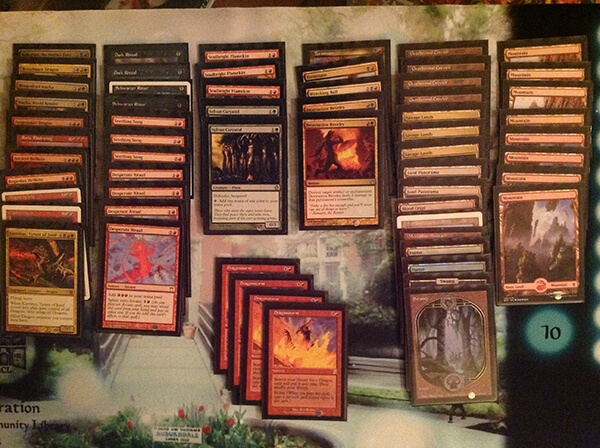 The deck comes in with better defense early on, a bigger wallop with Dragonstorm and a more stable mana base than the 20 land special from the original! Expect updates in the future involving the results of future games with the updates in place!