Long before the Eldrazi terrorized the planes, Standard was held in the grip of a group of creatures called the titans. 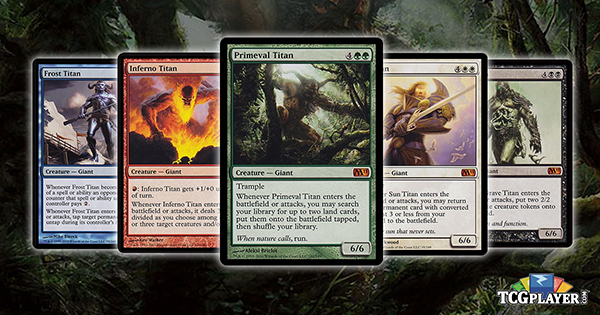 They ruled over the metagame with their combination of high power level and affordable cost, and since they had valuable enter-the-battlefield triggers, not even creature removal could neutralize them. There was nothing else as efficient, so the metagame warped around decks that sought to make the most of them.

Primeval Titan still lives on as one of Modern's finest creatures when combined with Valakut, the Molten Pinnacle, but the pair did heavy work in Standard too. Even when Valakut, the Molten Pinnacle rotated out of Standard, Kessig Wolf Run took its place, and Primeval Titan continued its reign. Primeval Titan even sees play in Legacy Cloudpost decks. The infamous Caw Blade deck, which happened to include Sun Titan, was rivaled by a Temur deck that ramped into Inferno Titan and Frost Titan as its central gameplan. My favorite is Grave Titan, the finisher of choice in U/B Control, the dominant deck before CawBlade took over, and outshines the rest in cube drafts.

The titans were so powerful that they were Standard. Think Siege Rhino, another prime example of efficiency that also came with a nice enter-the-battlefield trigger. Siege Rhino defined Standard throughout its lifetime, and so did the titans. The reason I'm bringing this up is, well, titans are back.

I was looking at the spoiler for Noxious Gearhulk, and it hit me. This thing wasn't just another ordinary creature — it had the same cost as a titan and the same enter-the-battlefield template. The picture is even reminiscent of Grave Titan, a giant, dark figure in stride towards the left, blade in hand, like it is some artifact skeleton of the titan, eternally living its life of killing long after its flesh had decayed.

I then thought back to seeing Torrential Gearhulk, another cookie-cutter replica of a titan, and I realized this was a cycle. I frantically clicked the "artifact" tab of the spoiler page, and there they were, clear as day before my eyes, Verdurous Gearhulk and the aptly named Cataclysmic Gearhulk.

Replacing the attack trigger of titans with the generic keyword ability of the gearhulks is the perfect way to tone down the power level of titans without watering down their taste. The large size of the titans was a big part of why they were so good; gearhulks offer smaller bodies but with more utility because of the keywords.

I want to get a sense of what we have to work with, so let's go over each gearhulk one by one and figure out how it might best be used.

Noxious Gearhulk is straightforward and easy to understand: a Murder attached to a creature with lifegain upside. Noxious Gearhulk is similar to Gilt-Leaf Winnower without the narrowness that holds it back. It's a shoe-in for any Traverse the Ulvenwald toolbox, but black decks of all sorts will have the most copies — think midrange decks that embody the mindset of creature removal mixed with threats. The lifegain will prove useful against aggressive decks by helping to stabilize the situation after taking damage in the early turns and preventing burn spells from stealing the game.

Consider the critical function of Noxious Gearhulk as an answer to the other gearhulks, which will certainly be everywhere, demanding to be destroyed. It gives black decks a leg-up against other gearhulk decks and will be a defining feature in the identity of black in Kaladesh Standard.

Torrential Gearhulk is the quintessential build-around gearhulk. It arguably offers the greatest potential upside of any gearhulk, but it also requires the most work to set up. The "Snapcaster Titan" combines the ability to play a spell from the graveyard with a flash body, only this time super-sized. Flash is the best of the keyword abilities because it makes the creatures tactically flexible, and six toughness makes it the most robust gearhulk.

A look at the most expensive instants reveals Scour from Existence, which could be a reasonable card in a Torrential Gearhulk control deck already planning on reaching six mana. Grip of Desolation would be powerful in a black deck. Otherwise there aren't many great options, besides plenty of card drawing like Scour the Laboratory, and recasting Confirm Suspicions would be fun. Down the curve there are strong blue options, including Anticipate, Unsubstantiate, and Void Shatter. Black offers Murder, Grasp of Darkness, and Succumb to Temptation, while red offers plenty of cheap burn including Galvanic Bombardment and Geistblast. Torrential Gearhulk looks to be destined for a control deck of some sort, where it will be an effective finisher and source of card advantage. I'll be looking towards the rest of the spoilers to see what exciting new instants are revealed.

Cataclysmic Gearhulk offers an extreme level of destructive capability attached to a creature. Its name and ability are an homage to Cataclysm, which levels the battlefield and leaves each player with a sole creature, artifact, and enchantment. Rather than destroying lands, Cataclysmic Gearhulk destroys Planeswalkers, an update for Magic in the modern era. Destroying artifacts will be relevant in the world of Kaladesh, but the main ability here is destroying creatures, making it a hoser against creature decks. Cataclysmic Gearhulk looks to be tailor-made for control decks, offering a sweeper that threatens the opponent while simultaneously defending with vigilance.

It's important to understand that Cataclysmic Gearhulk's ability is even better than it looks because it can select itself as the artifact, which leaves open the creature slot for something else. Its controller can plan on having another creature left behind, which breaks the parity of the ability and makes it very easy for its own controller to maximize, much like how Tragic Arrogance works with Hangarback Walker. This will work both ways, however, and means that opposing gearhulk will remain in play unless there is another artifact to choose, but their gearhulk can be selected as both their artifact and their creature. Cataclysmic Gearhulk makes Declaration in Stone even better because it can give the opponent an artifact to select.

Cataclysmic Gearhulk will be best in a controlling deck with a few other creatures, which minimizes its exposure to the sweeper, but allows it to play additional threats. Another way to get around the sweeper it to diversify your threats, so adding a planeswalker like Gideon, Ally of Zendikar could be very effective.

Verdurous Gearhulk may be the best gearhulk of all; on the scale of sheer efficiency it offers a tremendous amount of power and toughness for a low cost. A reasonable comparison point for Verderous Gearhulk is former Standard player Wolfir Silverheart, which also gave another creature +4/+4. Verdurous Gearhulk doesn't have the same upside as Wolfir Silverheart, which also pumped itself, but in the real world, where creature removal is everywhere, the permanency of the +1/+1 counters and their ability to be placed on multiple creatures makes this ability far more practical and ultimately more valuable. Trample is also a great keyword that is useful for pushing damage through chump blockers, the typical problem confronting giant creatures like Wolfir Silverheart, and an upside of premier threats like Reality Smasher.

Verdurous Gearhulk is the perfect way to top the curve of an aggressive deck because its counters are ideal for pushing creatures through blockers and setting up specific combat situations. It offers its controller a lot of utility and makes the opponent consider multiple scenarios. Also consider that the four power essentially has instant speed if put on other creatures already in play, so it adds up to extra damage and can be especially threatening against planeswalkers. It's also a massive enabler for cards that require counters, which isn't necessarily relevant now in Standard, but it can be used to pump the power and toughness of cards where it matters, like the new Cultivator of Blades, for example.

The gearhulks will change the way we look at creatures in Standard, and they will change how the very format is played. Their enter-the-battlefield abilities will be troublesome for the one-for-one removal that fills the metagame, and will prove challenging for control decks to keep pace with. They come with natural resistance against the scourge that is Reflector Mage, which would allow them to be cast again for another trigger. They change the value of cards like Eldritch Evolution, which now has great cards to find, and could suddenly enter the competitive realm. Reanimation spells like Ever After have become more attractive with excellent new creatures to Reanimate that outshine previous options. Even their artifact status can be profitably leveraged!

The new Inventors' Fair can be cashed in to search the library for an artifact, which allows it to find any of the gearhulks. This colorless land goes hand-in-hand with the gearhulks and is going to accompany it in any deck that plays additional artifacts to enable it. It's legendary, so it won't be played in high numbers, but it's a little extra push that will make the gearhulks even better than they already were.

What do you make of the new gearhulks? Are they as good as I think they are? How are you planning to use them? What do you want the red gearhulk to look like? Share your ideas in the comments!