From the moment I saw Ash Ketchum pick up Pikachu, only to be instantly electrocuted, Pokemon has been a huge part of my life. The Pokemon video games were some of my favorites growing up, and to this day I still purchase each new release so I can relive those moments from my childhood. Despite my love of Pokemon, I only collected the trading cards for a few sets before they were set aside in a binder at the back of my closet, forgotten, while I pursued 'flashier' games like Yu-Gi-Oh or Magic: The Gathering. 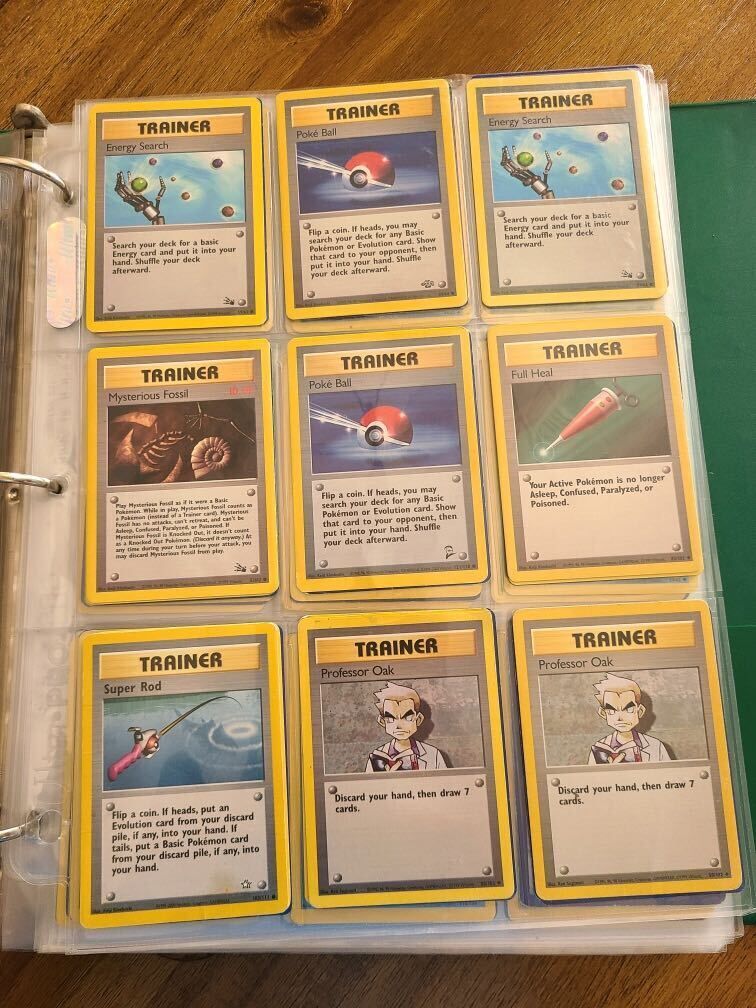 (An excerpt from the above-mentioned binder. Note the stack of 5+ commons being jammed into a slot so I could fit my whole collection into the binder.)

As an adult with a stable career, I can now afford to spend money on trading card games without my fiance being concerned about our financial well-being. My first foray back into the Pokemon TCG landscape left me overwhelmed by the number of changes since I left the game. This time, we're returning with an action plan built upon my successes and many, many mistakes so we can go from being a Pokemon newbie to Pokemon Master!

The Pokemon TCG has two true formats: Standard and Extended. In a similar vein to other trading card games, Standard acts on a rotating set list. This means older sets that are harder to obtain for the average player will rotate out of the game, making it easier to start from scratch. Extended instead allows any set released since the original Black & White set from 2011. While sets don't rotate out of Extended, there's a large ban list of cards determined to be too powerful for the format. Each format has its own perks, but for our sake we'll focus on the Standard format that started on August 28th. 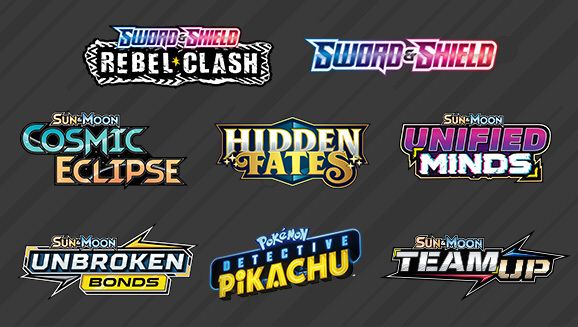 (The standard-legal sets we'll be looking for!)

Unlike other trading card games, the Pokemon TCG has an additional benefit to buying sealed products: almost every product comes with a digital code you can enter into their online client (PTCGO) to get a digital set. For theme decks, this means you can get a physical copy and a digital copy of the deck, plus some digital-only goodies like sleeves and coins. For randomized products like boosters, the code gives you a digital copy of the booster pack, which is a huge part of the PTCGO economy (but that's a different article entirely).

For our first purchase, we're looking for products to help us learn the game, as well as give us a decent amount of cards for building our own decks in the future. Theme decks are a great first choice because they offer a full deck to start with, a short rulebook to help us learn the rules, and a set of tokens/coins we'll always need more of. Ranging from $15 to $20, picking up a pair to play with a friend costs you less than $50.

Since we're staying within the standard format, there are 12 theme decks to choose from that are under $20, and relatively similar power-levels. For the first part of this series, we'll focus on decks found in the Sword & Shield releases: Sword & Shield Base Set, Rebel Clash, and Darkness Ablaze. The most important factor when choosing one of these is finding a strategy or Pokemon type that you enjoy, but there are definitely some decks to avoid.

Avoid These Decks (unless you REALLY love the Pokemon)

Zacian is my favorite Pokemon from Sword/Shield, but his card simply isn't good. With no ways to recover discarded energy except for using an attack that does only 30 DMG, there's little incentive to pile Energy on Zacian, knowing we'll be trapped into a turn of doing a small amount of damage while our opponent prepares to defeat him. Other than Zacian, the deck has a number of cards that rely on flipping coins or playing Rock, Paper, Scissors with your opponent, making wins feel less impacted by skill and more akin to a game of chance. Even if you really want to play Steel-Type Pokemon, you're better off with some of the other choices on this list.

The gallant Sirfetch'd is unfortunately not ready to follow the knight's path quite yet. This deck is full of Pokemon with strong attacks that come with an incredibly steep cost. Most of the Pokemon you'll be using in this deck have high HP because you'll be spending your turns weathering blows until you can attack with a move that costs three to four energy. Our focus with these Theme Decks is to learn how to play the game, and this deck spends too much time not doing anything for us to learn much at all.

The cards in this deck seem uninteresting at first, but offer interesting plays once we learn more about the game. Galarian Darmanitan in his ice form has the attack Blizzard, which damages our opponent's active Pokemon and their bench at the same time, at the cost of three energy. While the best offensive cards in this deck have steep energy costs, they're paired with cards like Suicune and Pelipper that move energy from one Pokemon to another so you can set up future plays. This deck has energy efficiency and several ways to draw cards, making it a great place to start our Pokemon journey.

Unlike the other Steel Theme Deck released for Rebel Clash, Zamazenta has several cards that make it more worthwhile than its counterpart. The deck uses Ferrothorn and Duraludon to manage their energy cards, as well as the Pokemon Tool Metal Saucer which pulls steel energy from the discard pile back to your benched steel Pokemon. This energy efficiency allows you to go all out with your frontline Pokemon: Zamazenta and Corviknight. Each of these Pokemon has an attack that reduces your opponent's damage on the following turn, letting you play the long game while you grind your opponent's Pokemon to nothing. Despite being a Stage 2 Pokemon needing a decent amount of set-up, Corviknight is an awesome card with 170 HP, and can drop your opponent's attacks by 100 if you're able to discard two energy from this Pokemon!

The Cinderace Theme Deck is the first of three decks built around the starters from the Sword & Shield era. This deck has a straightforward gameplan: get Cinderace or Dubwool into the active spot and wreak havoc until the game is over. Both Cinderace and Ninetales have an attack called Flame Cloak that attaches a Fire Energy from the discard pile directly to the Pokemon that used the attack. This works well as fuel for Cinderace's other attack, which has the downside of discarding attached energy, but otherwise there isn't much value in getting your energy to the discard pile. This deck aggressively attacks your opponent, but that's about all it really does.

In the second deck built around a starter Pokemon from Sword & Shield we have Rillaboom. Rillaboom is a massive beater by himself, boasting 190 HP and two attacks that do 90 DMG and 180 DMG! This deck spreads the energy to your Pokemon through Eldegoss's attack 'Blessing of Fluff', letting you search your deck for up to 3 Grass Energy and attach them to your benched Pokemon in any way you like. Your aggressive Pokemon Rillaboom, Maractus, and Snorlax are perfect targets for Blessing of Fluff to get them the Energy they need to pull off their strongest attacks. With a strong frontline and excellent supporter Pokemon, this is definitely one of the best Theme Decks from Sword & Shield.

Where Rillaboom excels at defeating your opponents with awesome power, this Theme Deck works to destroy your opponent piece-by-piece. The Inteleon Theme Deck is the final of the Sword & Shield starter-based decks and uses a strategy unique to this list to win. Inteleon aims to control your opponent's plays by forcing them to discard cards or removing energies from their active Pokemon. Most of the Pokemon in this deck list are focused on hurting your opponent's ability to play the game by disrupting their hand, their deck, or their benched Pokemon. Playing a 'control' deck offers more adaptability than just an aggressive deck, at the cost of having weaker attacks or lower HP. However, this deck also includes Dreadnaw, a Pokemon with 130 HP and two attacks that punish your opponent for wanting to retreat. Though this deck may not be as outwardly powerful as others on this list, it can do amazing things in the hands of a player who has learned to use attrition to their advantage!

This concludes the first part of our look at the Standard playable Theme Decks for Pokemon! While some of these decks may not be as strong as others on the list, the most important factor when choosing a starting deck is to pick one that you will enjoy. (For me, that meant Sirfetch'd!) Next time, we'll cover the older set of Theme Decks that are harder to find, but can definitely be worth your while.

Until then, pick up a deck or two, find a friend to sit down with you, and start your quest to Catch 'em All!