Going into Monday, I did not anticipate the Standard banning of Uro, Titan of Nature's Wrath to be the on the backburner within the Magic community, but as usual, there is always something else.

Granted, the hotly debated topic is a valid issue within the game: product overload and the scarcity of that product. You got it! I'm talking about Secret Lair.

Before now, most of us could take or leave Secret Lair, as the premise was to reprint existing cards with new art or tie to brand. Secret Lair generated a mixed reaction amongst players as it preyed on they fear of missing out due to the extremely limited timeframe these were on offer. Some of the products were good, some were forgettable, and some of them made expensive cards a little cheaper. A weird outcome, as Wizards of the Coast does not officially acknowledge the secondhand market. Nope, not one bit.

But the Walking Dead Secret Lair looks to change the formula altogether, and not in a healthy way.

Announced on Monday, this is the first Secret Lair to introduce mechanically new cards with the same legality rules as supplemental sets—they're legal in all Eternal formats.

Naturally, enfranchised and casual players are not happy with this concept. What if Michonne or Negan or one of the cards that hasn't been spoiled yet becomes a staple in Commander or Legacy?

It's "if's" like these that drive players to pay ten times the price of a booster pack for a third as many cards to begin with. Let's be honest, it's a predatory notion that can create poor purchasing habits for players and is extortionate in various ways. The very tagline for Secret Lair is "Miss a drop, it's gone," which feeds into FOMO. 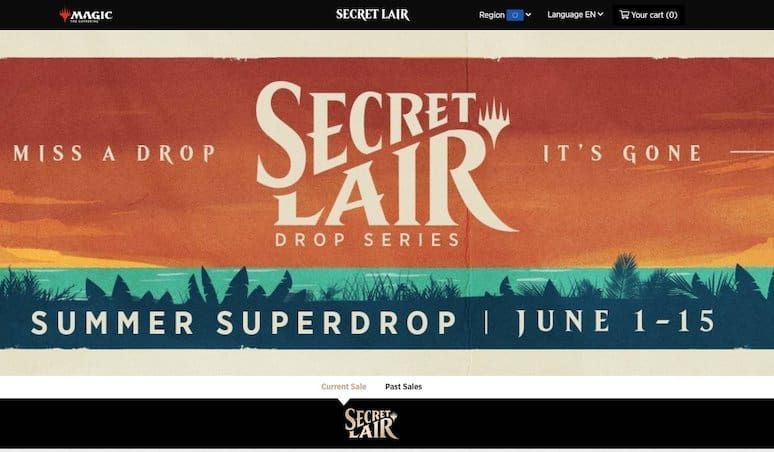 Even if the marketing were different, the #MTGFinance folk will be buying this up as it's incredibly collectable and limited, which will generate further demand for something you realistically do not want or need.

I'm not the biggest fan of Secret Lairs for this exact reason, however, I can respect that players may want to bling out particular cards for their decks. But mechanically new cards add another layer to the problem.

In a way, it's an expansion of the Reserved List. That's perhaps an extreme take, but these cards will be as scarce as Reserved List cards due to the one-week window that they're available. Not to mention, there are other factors such as distribution and licensing issues that can deny the option of seeing these cards with these names and this exact art ever again.

Granted, Wizards of the Coast have since said they can reprint the Secret Lair X The Walking Dead within a Magic: The Gathering set if they wanted to, but don't get your hopes up.

This official response feels weak. If this was the case, why not print these in any other set or product this year? This year is the fabled "Year of Commander," so these could easily slot into Commander Legends under a different name. Naturally, the premise of this Secret Lair could be to attract long-time Walking Dead fans to the game. But even then, it's a meager attempt as they would have to either play Legacy (good luck) or Commander, which for all its positives can be expensive and daunting to enter as a completely new player.

For an enfranchised player such as myself, this is a troubling path that Hasbro (who owns Wizards of the Coast) is taking. Unfortunately, the continual trend of products such as Secret Lair will be an ongoing theme in years to come as Hasbro aims to double the profits of the company by 2023.

I believe the enormous push of product in the last two years is a Hasbro decision, which has left Wizards of the Coast to deal with the community backlash. Genuinely, I believe Hasbro to have more influence at Wizards of the Coast than we realize, trickling down to departments such as Play Design and R&D. It's easy to blame the face of the operation (in this case, Wizards), even though Hasbro are the ones explicitly pushing for sales to hit targets. You have every right to be mad, annoyed, and frustrated with how the game is changing, but it's something to bear in mind when putting your thoughts out on a social platform. Give people such as Mark Rosewater and Gavin Verhey a break, it's not their fault.

The Commander Rules Committee (RC) may end up banning these Secret Lair Walking Dead cards from the get-go for exclusivity reasons. It's something we have seen in the past with Lutri, the Spellchaser, and the original Moxen. All of these cards saw a ban because the RC was not comfortable having these in the format as they effectively raise the barrier to entry. I believe this would set an excellent example going forward, establishing that the RC is independent from Wizards of the Coast and cares first and foremost about the health of the game.

Lastly, I'll say that you don't need to buy this product. Simply because there are new cards that may be good in Commander or Legacy is not reason enough to buy them. Get used to exercising your financial independence. Unfortunately, this may not be the last Secret Lair with mechanically new cards, which means it's going to get worse before it gets any better.