This year marks the 28th year of Magic: The Gathering's existence as a collectible trading card game. Since 1993, Wizards of the Coast has created over 100 MTG sets. While many sets released in the 1990s are memorable to long-time players, not all were successes for WotC.

Two early MTG sets deemed failures by WotC are Fallen Empires and Homelands. Fallen Empires' production intended to correct the already felt scarcity of earlier expansions—by being printed to oblivion. The following year saw Homelands, which remained on shelves for a different reason—the low power level or fringe use of nearly every card in the set. Before getting into more specifics that plagued Fallen Empires and Homelands, I would like to highlight one interesting similarity between the sets. 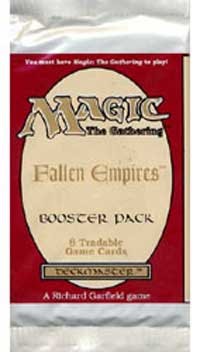 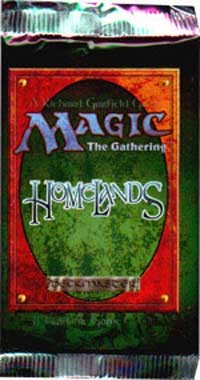 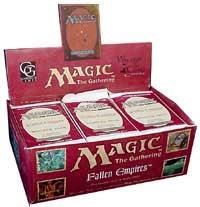 Unfortunately, WotC overprinted Fallen Empires to where booster packs were available at retailers for almost four years after release. You might be thinking that this is not an issue as booster packs from sets printed four years ago from today are available in local gaming stores. However, you are likely going to pay a premium for aged booster packs over their initial MSRP. In the case of Fallen Empires, supply outweighed demand. Allow me to share a personal story highlighting how much product got released relative to market demand.

My brother and I started playing MTG in 1995. A neighborhood friend introduced the game to us after purchasing a 4th Edition starter deck. We had no idea Fallen Empires existed until late 1996. In 1997, we walked into a Babbage's and saw Fallen Empires packs selling on clearance for $0.79 each. After purchasing about 30 booster packs, we opened them only to find mostly bulk cards. Nevertheless, we did enjoy playing with Goblin Grenade, Hymn to Tourach, and Order of the Ebon Hand in our existing decks.

Fallen Empires' overprinting was made worse by the small set size and relatively underpowered cards. Many commons and uncommons, including some of the U1 cards, became bulk due to their availability and underwhelming strength. There were a few more playable Fallen Empires cards such as Breeding Pit, but they were inexpensive and easy to acquire. However, there is one bright spot for Fallen Empires as the set includes 27 Reserved List cards. Rainbow Vale, Elvish Farmer, and Dwarven Armorer are a few Fallen Empires Reserved List cards worth over $2. The actual sold listings of $15 booster packs from a set containing just six U1s (i.e., rares) with TCGplayer Market prices over $5 and none near $15 are telling. There is the fun and nostalgic value of opening an ancient booster pack in MTG terms. However, I still cannot recommend paying $15 for a booster pack or $800 for a booster box. I want to believe we will see a market pullback on Fallen Empires box pricing that approaches rationality, but it may not happen this year.

There is an intriguing story told through the flavor text of Homelands' cards. One of the storyline's stars is Baron Sengir, who made a recent appearance in Commander Legends. Other interesting characters include Ihsan's Shade and Autumn Willow. A 2011 MTG mothership article, Homelands: The Making of a Magic Expansion, shares details about the creation of Homelands and, in particular, Baron Sengir. If Homelands contains such a rich story, why is the set considered a failure? The glaring reason is the power level of cards in Homelands is low, as previously mentioned. There were only a handful of cards worth including in an MTG Constructed deck back in 1995. Even most of the 35 Homelands cards on the Reserved List lack playability. Many noncreature spells are lackluster or too narrow in scope based on today's standards, with a few exceptions, including Memory Lapse and Merchant Scroll. One of the more notable Homelands artifacts is Serrated Arrows. You may recall seeing Serrated Arrows as a timeshifted card in Time Spiral.

Beyond a subpar power level, Homelands suffered from other design troubles. In an MTG mothership article titled Make No Mistake, Mark Rosewater (Head Designer for Magic: The Gathering) discusses 20 MTG design mistakes. The very first mistake mentioned in the article is the card design for Homelands. Here is what Rosewater says regarding Homeland's design issues:

And I'll be blunt with you, as someone who's dedicated the last eight years designing Magic cards, Homelands was a poorly designed set. It wasn't very innovative. It didn't introduce any strong mechanics. It didn't have good synergy. It wasn't particularly elegant. It didn't have many of the qualities that we now judge a set's design by. (To be fair, the set was very flavorful, so it wasn't without any design merit.) Considering the design failures of Homelands, why are sealed booster boxes listed for $1,000? Interest in Homelands booster boxes likely derives from a combination of nostalgia and collectability (the same as Fallen Empires). I already mentioned how set EV is not a good indicator of the market value for old sealed products, but I will share that Homeland's TCGplayer Mid EV on MTG Dawnglare is $231 or $3.85 per pack.

Regardless of EV, individuals are purchasing Homelands booster boxes well above last year's prices when they were $300 or less. Paying close to $1,000 for a Homelands booster box or even $15 for a loose booster pack seems outrageous. Although I think current prices are high, buying MTG products does not have to be rational. Over 2020, Fallen Empires and Homelands booster boxes dramatically rose in price to record highs. The price spikes may result from the increasing demand due to the nostalgia, collectability, and scarcity of old sealed products. However, it is unrealistic to expect Fallen Empires and Homelands booster box pricing to revert to $300 any time soon based on current market trends. So if you want to buy Fallen Empires or Homelands sealed products for fun or nostalgia, go right ahead. Just don't buy into these price spikes thinking you are going to earn a profit.