Hi there! Welcome back to the number one Magic finance series on TCGplayer. Is it the only Magic finance series? That's irrelevant. Last week, we discussed my weekend at Grand Prix: Minneapolis, and prior to that I started a mini-series on how to sell cards though the TCGplayer marketplace platform. We're going to continue the latter by answering a couple of the questions from readers regarding the platform. Let's get started!

The question that makes up the meat of this article comes from Scott.

"One area I wish you touched on though was how to handle disputes, but maybe that's more 102 or 201, if you will. One of the inherent risks to eBay and the like is managing disputes from people looking to nitpick even the slightest disagreement on a card's condition. I'm curious how often that takes place." - Scott

This is a great question, and certainly something to be aware of before you start selling cards to people you've never met or interacted with. It's really easy to discuss the condition of a card when trading in person; both players can see, feel and hold the card to assess any change in value. This gets more difficult when selling a card online through a virtual marketplace. If you're relatively new to assessing the condition of the card, I recommend checking out this helpful guide before you start listing.

I'll start with the latter part to Scott's question. When I first started selling on TCGplayer over four years ago, I received more than a couple messages about the condition of my cards. I wasn't as experienced in buying and selling as I am now, and there were several aspects of conditioning a card that I missed when determining whether to list as Near Mint (NM), Lightly Played (LP), or Moderately Played (MP). The two less obvious aspects of condition that a newer player may not understand are scratching and clouding.

As shown in the condition guide, it's relatively easy to see when a card has edge wear, because that wear is visible from all angles and most forms of lighting. There's no real argument that this Island pictured below can be considered "Near Mint," because of the obvious whitening on the black edges of the card. 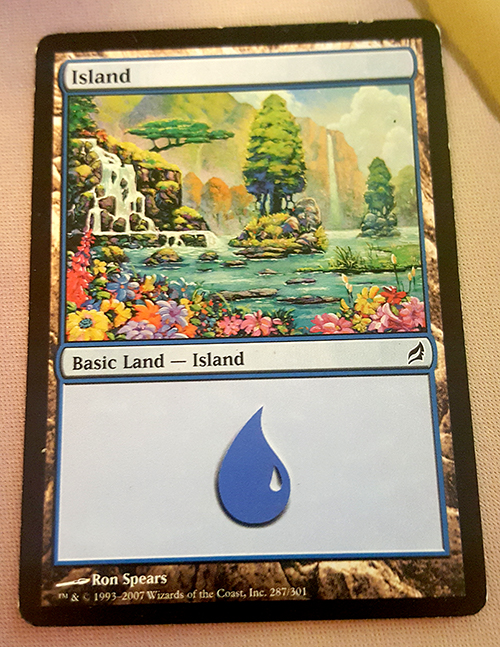 Now, let's take a look at the back of a different Island to talk about what I mean by scratching, and how it might be harder to see to an untrained eye. Here's another card with similar edge wear; other than that, the card looks fine, right?

Now let's take a look at it under a more direct light, at another angle. Do you notice any additional flaws on the card? Remember, this is the same card as the second picture, but from a different viewpoint.

There's a serious horizontal scratch on the left side of the card, a little below the halfway point and going towards the red mana circle. If someone had taken a quick glance at the card in a darker room, they might peg it as LP and call it a day. However, those previous edge wear markings combined with this additional mark will, cut the card down to MP in my book. If you plan on listing a lot of cards through the site and want to avoid any condition disputes, I highly recommend having access to a strong enough light source that can help you see all aspects of a card.

The second issue that I've seen pop up is not knowing how to condition foils differently. As stated in the condition guide, foil cards are normally conditioned more harshly than their non-foil counterparts. Someone who is buying foil cards is often spending a lot more money to make their deck look nicer, and wants the condition to reflect the price tag. Because of the layer of foil, these cards can run into condition issues that non-foils do not. One of these such issues is called clouding.

This wouldn't classify as edge wear, which is the main reason that it's easy to overlook if you only assess the card directly in a weaker lighting situation. However, the difference between a clouded and non-clouded foil is very distinct when you get them in the right lighting. It almost looks like a grayish film dulls the shininess of the card, and gives it a "dirty" appearance. Depending on how severe the clouding, this can reduce the condition of the card to LP or even MP, even if the edges of the card look great and it doesn't have any scratches.

Now for the original part of Scott's question. I very rarely have someone "nitpick" the cards that I sell, because I've learned the proper ways to condition a card. To give you an exact idea, I've received exactly two messages on that subject in the past six months, and both of those were my own fault for missing something while assessing condition. As long as you evaluate fairly and honestly, you shouldn't have any issues with customers messaging you suggesting that you were dramatically off course on your judgment. If I do receive such a message, I normally offer a 10% discount on the card to account for the mistake or oversight on my part.

But what do one of those messages look like? One of the more important parts about running your own online storefront is that you're responsible for all aspects of the "business." You're the person who lists cards, you're the one who packs orders. You're also the entire customer service team! When someone does happen to send in a complaint, you're the first responder. Here's an example of a message I sent in response to someone saying that their order hadn't shown up yet.

My records show that it was shipped out on the afternoon of 2/4/2017. I'm sorry that you haven't received your card yet; it hasn't been returned to sender either. I would be happy to send out another copy, but I unfortunately don't have another one in stock at the moment. I can submit for a full refund to be conducted, although it might take a couple of days for TCGplayer to process that. Please let me know if it does end up showing up.

Thankfully I never got a reply to that message, so it looks like they received the card and lived happily ever after. Prompt and helpful customer service is really important in this industry, because like any retail store you live and die by customer feedback. Not only is your feedback score tied directly to your ability to level up and achieve rewards from TCGplayer itself, but awesome customer service indirectly builds your sales rate by drawing in customers who have had a positive experience and want to run it back with repeat business. I've gotten in the habit of writing puns on the packing slip, including a matching token with a card that creates tokens, or even just a handwritten thank-you message goes a long way towards that five-star feedback and a positive message from the buyer.

Next up is something you may have wondered prior to listing anything in your new online storefront.

"The one question I have, do you get charged anything if something doesn't sell? Can you swap out items when you are capped with the # of listings at no cost? Thanks again, look forward to more content." - Chris

The short answer: Nope! TCGplayer doesn't charge you for listing items, regardless of how long you have them up. You're also free to swap out listings and change the products you have listed, whenever you want. As long as you don't go over the total number of listings you're allowed at the early levels, you aren't charged a single penny until you actually sell a card. And thanks for the kind words, Chris!

The last question comes from Karlos, and it segues really well into a topic that I'll cover in more detail when we have more time. Want a hint? Play around in your storefront with a little something called a "price differential report."

"Some people had Hazoret listed at the pre-Pro Tour price during the day when the price was rising. Were they just left behind, selling a card at a ridiculously low price, or does it update automatically to match the trend?

You said you'd answer this later, so I can wait, but that's the part I'm super curious about. I can't imagine people with hundreds of listings are updating them in real time all day and night." - Karlos

You're correct in your guess, Karlos. Most stores aren't constantly hitting the refresh button on their keyboard to avoid price spikes, and TCGplayer does not automatically update your prices for you. The seller is always responsible for selling the card at the price they listed it at, even if that means the card spikes in price drastically overnight. I've sold foil cards for their non-foil price because I was really tired while listing, and learned really quickly (when someone bought them 10 minutes later) about my mistake. Whoops!

Honoring sales during price spikes is a really good way to generate positive customer feedback! Most buyers placing orders during a spike are customers who want the card to play with, and would prefer paying less now versus more later. If you're ever worried about selling cards before a Pro Tour in anticipation of a spike, you can always hide your storefront from the seller portal platform. It makes your inventory invisible for however long you like, and holds all your listings and prices until you're ready to reactivate!

One of the hottest topics in the world of Magic finance right now is the Reserved List and the impact it's having on cards. This is a huge discussion topic and certainly one that I could devote a lot of time and articles towards, but I'll throw out one short piece of advice here. If you have no plans on using any of these cards for personal use, then don't worry about buying them. Cards like Ring of Ma'ruf have zero value to 99% of players, and they aren't going to be easy to move if you buy them for the purpose of reselling later.