Can you believe it took nearly twenty years for Yu-Gi-Oh! to release a proper pirate theme?

The mercenary band Fur Hire came close to embracing the seafaring fantasy of sailing, swashbuckling and looting, but it didn't fully commit to the theme. The new World Premiere Plunder Patrolls in Ignition Assault are finally addressing that glaring omission by introducing a crew of goblin pirates.

Plunder Patroll takes the form of a spiritual successor to Zoodiacs with their unique 1-card Extra Deck summoning mechanic, but there's a catch: you'll need to rely on the monsters your opponent has in their graveyard, or those on the field, to take full advantage of their Extra Deck cheats.

Meet The Gang
As of Ignition Assault there are seven cards in the Plunder Patroll theme, but just two of them are Main Deck effect monsters while three more monsters exist in the Extra Deck. The lopsided distribution of Main and Extra Deck monsters is unusual, and unfortunately it has a negative impact on deck building; it's difficult to build around a theme when there's a max of six Main Deck monsters at your disposal. That said, both monsters have fantastic abilities that help mitigate the fact that Main Deck Plunder Patrolls are currently in short supply.

So, about that Attribute-matching condition: yes, it's a real pain to build around. You're always in a sub-optimal position any time you need to rely on your opponent's actions or card choices to advance your own win condition. The effects that Summon Plunder Patrolls from the Extra Deck aren't the only reason why this theme is interesting, but it's by far the best mechanic at your disposal.

Every Plunder Patroll player will want to land match-ups with decks that primarily feature Fire, Water, and Dark Attribute monsters to reliably abuse the Summoning mechanic attached to their best cards. Playing against an Earth, Light, or Wind-heavy theme is an uphill battle – at least for now. We'll talk more about this dynamic later, but for now let's check out the theme's Extra Deck monsters and support cards. 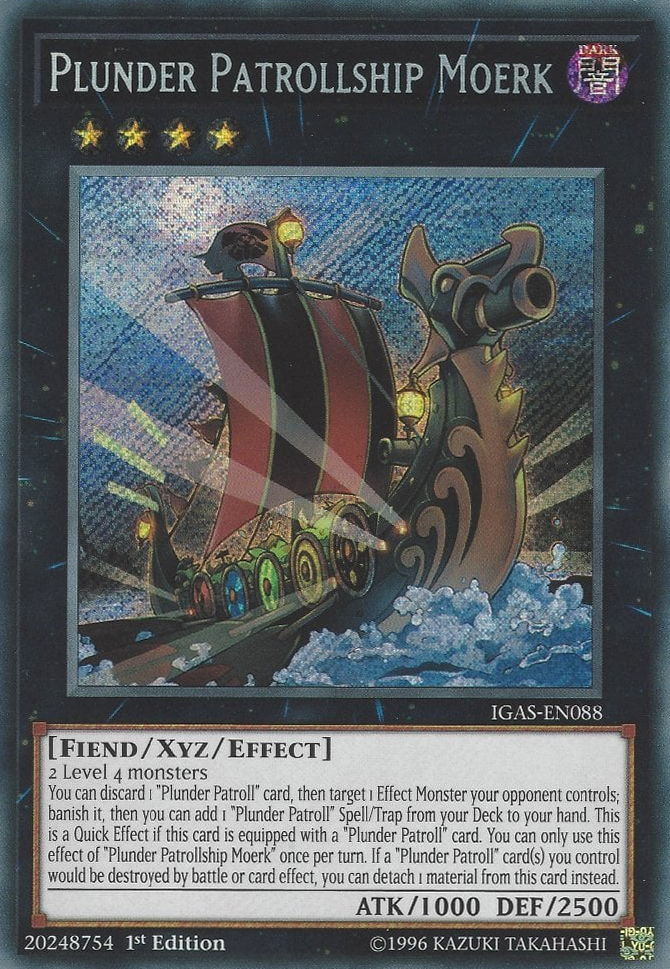 Plunder Patrollship Moerk is arguably the most impactful Plunder Patroll Extra Deck monster when Summoned alone, and its Attribute happens to be the most common in the game. There are about as many Dark Monsters as there are Wind, Fire, and Water monsters combined. That said, Moerk is easily Xyz Summoned with the help of basic Level 4 extenders like Photon Thrasher, Danger! Mothman! or Instant Fusion. It's possibly the most useful card to build around for one specific reason: resolving its first effect lets you search the deck's Field Spell, which can in turn search any other Plunder Patroll card. Of course you'll need to discard a Plunder Patroll to activate Moerk in the first place, so it's not a catch-all every time you open without a Plunder Patroll card.

The theme's Fire Synchro – Plunder Patrollship Brann – searches monsters directly when you resolve its backrow removal effect. Again, a Level 4 extender paired with Whitebeard will easily Synchro Summon Brann, but if you're playing against Salamangreats, Infernoids, or another Fire theme you won't even need that. Brann's ATK boost is nothing to scoff at, especially when it's added on top of the extra ATK provided by Plunder Patroll Shipyarrrd. While Brann itself might not receive its own buff it'll still typically end up at or above 3000 ATK when Shipyarrrd's in play.

The removal effects of Moerk and Brann become Quick Effects when they're equipped with a Plunder Patroll card. This theme doesn't have a dedicated Equip Spell, but both Main Deck monsters and Blackbeard are built to equip Plunder Patrolls to the Extra Deck monsters. Once those Quick Effects come online your opponent will need to navigate through chainable spot-removal that's essentially costless. They're fantastic defensive effects, but only so long as you can Summon them with the effects of your Plunder Patroll cards. That, again, requires a little help from your opponent. 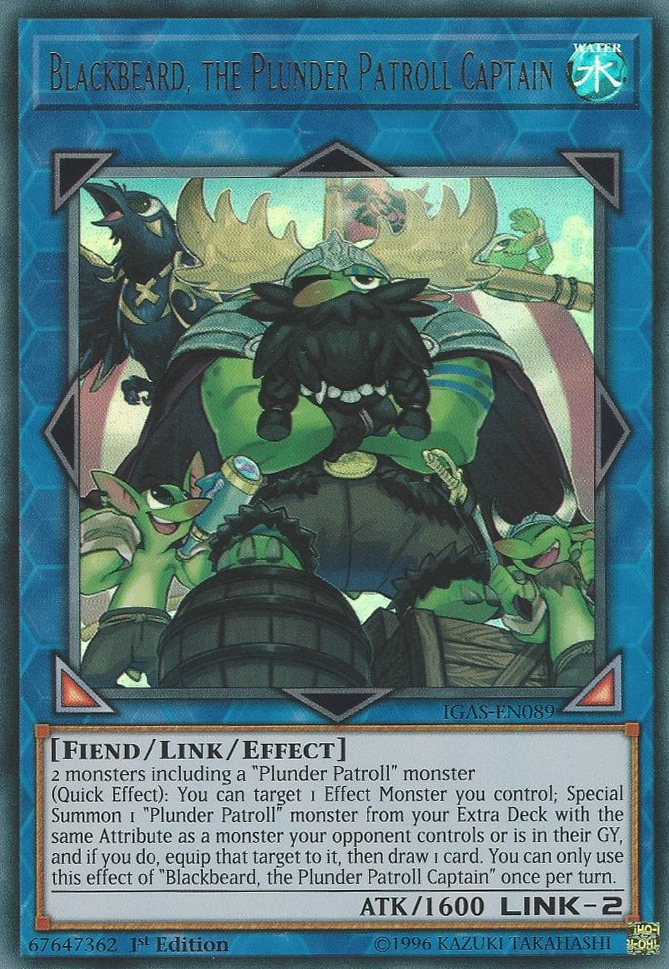 Once Blackbeard hits the field you can Summon one more monster to give yourself a target for its Quick Effect, which imitates the effects of Whitebeard or Redbeard. The targeted monster becomes equipped to the Extra Deck Plunder Patroll, and as a bonus you'll get to draw a card. You can even use this effect on your opponent's turn, which lets you wait for your opponent to commit a card to the field or graveyard before Summoning a matching monster.

Lastly, Plunder Patroll Booty is anything but: it's a rather strong piece of themed graveyard recursion that doubles as a crutch for the theme's biggest weakness. You're going to have plenty of match-ups where your opponent simply isn't playing any Dark or Fire monsters, so you'll need to make some targets for Blackbeard, Whitebeard, and Redbeard.

Booty will be destroyed during the End Phase without another Plunder Patroll monster on the field, but if you have at least one Plunder Patroll on the board – and can keep it there – a single copy can churn out an insane amount of field presence over a couple of turns. It's fantastic in short bursts, pulling double duty by Summoning a Plunder Patrol and setting up Whitebeard or Blackbeard's effects immediately.

A Pirate's Guide For 2020
So let's talk deck building. Ideally your opening combo involves Whitebeard, Plunder Patroll Helm and another Level 4 extender. I'm partial to something simple, like Instant Fusion to fetch a Level 4 Fusion monster or Photon Thrasher.

Danger! Mothman! Is also an excellent choice for a couple of reasons. First, it's a great extender alongside a bigger Danger engine you'll almost certainly want to play, and second, its draw-and-discard effect can force your opponent to discard a monster. There aren't many ways to load your opponent's graveyard with a monster on Turn 1, but Mothman accomplishes that when it's discarded by its own effect, or another by another Danger, or even when it's used as a cost for Plunder Patroll Shipyarrrd.

A Level 4 extender isn't required if you're going straight into Blackbeard, the Plunder Patrol Captain, but they have the best utility given that the deck's other Extra Deck options are a Rank 4 and a Level 8 Synchro. You'll sometimes need to go straight into your toolbox to remove some threatening card on the field, and so far all of this theme's removal options are tucked away in the Extra Deck. Unfortunately your access to those cards is limited to the kinds of monsters your opponent is playing, so until you find Plunder Patroll Booty your best bet is to have a quick way to Xyz Summon or Synchro Summon your spot removal effects – ignoring the Plunder Patroll mechanic entirely. 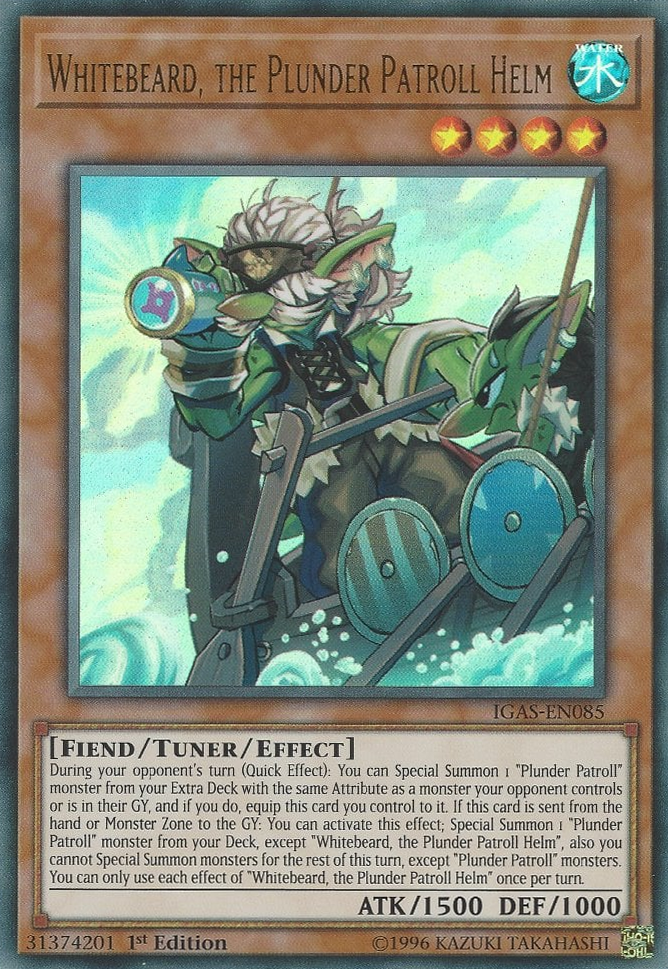 The real secret to your success with this deck is leveraging Whitebeard effectively. Its second effect Special Summons a Plunder Patroll from the deck when Whitebeard is sent from the hand or a Monster Zone to the graveyard. For example, discarding Whitebeard with Shipyarrrd or a Danger monster lets you Special Summon Redbeard from the deck, as does using it for a Synchro or Link Summon. Your opening play to Link Summon Blackbeard with Whitebeard and an extender will also Summon Redbeard from the deck, and you can then use Blackbeard to Summon Moerk or Brann with Redbeard equipped. It's a two-card investment that ends with a Link 2 and a Quick Effect-enabled Moerk or Brann, provided your opponent's playing Fire or Dark Monsters, and provided you have a Plunder Patroll in your hand to discard for their effects.

Speaking of discard costs, Shipyarrrd is a lifesaver for paying the costs of Moerk and Brann. You can add Shipyarrrd straight back to your hand with its second effect, which simultaneously recycles a Plunder Patroll card. It's even better than you might think at first. Let's go back to the previous combo, and imagine that you had Shipyarrrd in your graveyard. Instead of ending on a Patrollship with Redbeard equipped you could instead activate Shipyarrrd from your graveyard, set it, and return Redbeard to your hand. From there you would discard Redbeard with Shipyarrrd to search Booty, and activate Redbeard in the graveyard to equip to your Patrollship.

There are plenty of different ways to play out your starting hand in Plunder Patrolls, but the lack of Wind, Earth, and Light Extra Deckmonsters definitely hurts. We'll most likely see those cards in Eternity Code in a few months, and I think at that point the deck will be finally ready for serious competitive play.

In the meantime a build with three of every Plunder Patroll Main Deck card, a huge number of extenders, and possibly Pot of Desires is your best bet. I've been experimenting with Black Garden to put a Dark monster on the opponent's field right away, and Dragon Buster Destruction Sword has potential with Blackbeard for a quick lockdown. If anything the deck simply needs more cards with Plunder Patroll in their names, regardless of whether they're good or not. There's an excellent foundation here, despite the deck's Attribute challenges.

It's hard to ignore how strong Super Polymerization is when you combine it with Plunder Patroll Booty. It's a fantastic piece of monster removal for the deck, but you might want to side it depending on the kinds of match-ups you're likely to face. I also really like I:P Masquerena here with Black Garden, which lets you turn your opponent's Summons into Link 3 or 4 monsters. I'm simply playing Knightmare Unicorn, but there are plenty of alternatives. Of course, you can also go into Masquerena to Link Summon Blackbeard on your opponent's turn.

Your top priority's finding Whitebeard, making your first Plunder Patroll Extra Deck monster, and getting Booty into play to maintain your field presence and disruptive power. Super Polymerization and Danger effects help clear the way for your Patrollships, but it'll be an uphill battle going second. Going first is potentially even more difficult if your opponent doesn't fire off an Ash Blossom & Joyous Spring early in the turn. Unfortunately that means Called by the Grave is a risky choice, though Fantastic Dragon Phantazmay is definitely a solid Side Deck pick.

Luckily Plunder Patrolls are surprisingly affordable despite their high rarities in Ignition Assault. Now's the time to pick up the deck if you're interested in the playstyle, and it's a great investment if the theme gets a second round of support in Eternity Code. Three more Extra Deck monsters and one or two more Main Deck monsters would put this deck on the map, and in the meantime it's one of the most fun casual strategies to hit the TCG in recent memory.